It Never Raineys But It Pours! Bonkers Is In The Daily Telegraph Again! 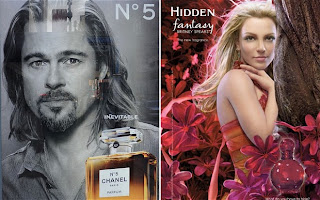 At the end of September I was interviewed over the phone by a features writer at The Daily Telegraph, Harry Wallop, about my views on discount chain Lidl's latest perfume release, X-Bolt for men. A couple of quotes from me were used in his article on the Hugo Boss smell-alike.

To my great surprise, a colleague of Harry Wallop's at the paper, Sarah Rainey, rang me the other day to quiz me - on the spot again! - about my views on celebrity-endorsed perfumes in all their manifestations, to feed into her upcoming feature on the subject.

Well, it appeared in yesterday's edition of The Daily Telegraph, and also includes quotes from Nick Gilbert, Manager of Les Senteurs' Seymour Place store, who is known to many of us, and has a wealth of expertise about fragrance as well as being an all-round good egg.

Here is the link:

The Sweet Smell Of Celebs

There are two soundbytes from me as before, about half way down. The article also mentions the current Chanel No 5 campaign featuring Brad Pitt and the one for Hugo Boss Nuit de Femme fronted by Gwyneth Paltrow, but didn't include my thoughts on those - perhaps for the best... ; - )

But here they are anyway - from an email I sent by way of a PS after my phone chat with Sarah - or should I call her "Rainey" by analogy with "Musson"? : - )

"I have to say that Brad looks like he has just got out of bed, and though Marilyn Monroe was famously said to have worn No 5 to bed, personally I don't think it is an elegant look for the brand. No 5 to me is more Catherine Deneuve in a French pleat than a rumpled Brad in a goatee. Maybe he should just borrow the wife's Bvlgari Black instead......And then you have Gwyneth Paltrow, who - along with three other high profile women - featured on the Estee Lauder Sensuous ads, which were very effective, I thought, in a clean-but-sexy-white-shirt-kind-of-a-way. At the moment Gwyneth is the face of Hugo Boss Nuit Pour Femme, but in the poster ad at least I think her smile strikes me as a little tentative - see what you think. She doesn't appear to be doing that Tyra Banks 'smiling with her eyes' thing. Maybe she is worried that there will be another Lidl me-too along shortly... ;-)" 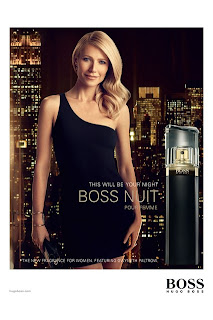 Hmm, come to think of it, Brad's not really "smizing" in that shot of him either, which I'd have thought was inevitable for the money they're paying him... ; - )


Photo of Hugo Boss campaign from Vogue website, photo of Brad Pitt and Britney Spears from The Daily Telegraph

Glad you had fun with it, though I promise you that the compliment was in no way meant to be "sideways", if by that you mean backhanded? My tentative use of the term "known to many of us" was purely prompted by my not knowing the audience of any given post, and all that goes with that - what to assume, who knows whom etc. And I did go on to speak of Nick's wealth of fragrance expertise, testifying to the fact that I do indeed hold him in the highest regard. I have been having educational fun with Nick since his Boots days in fact - see link below. And yes, I do agree that he is "totes adorbs" (which I must admit I had to look up). : - )
http://bonkersaboutperfume.blogspot.co.uk/2010/04/wearing-trousers-my-induction-into-male.html