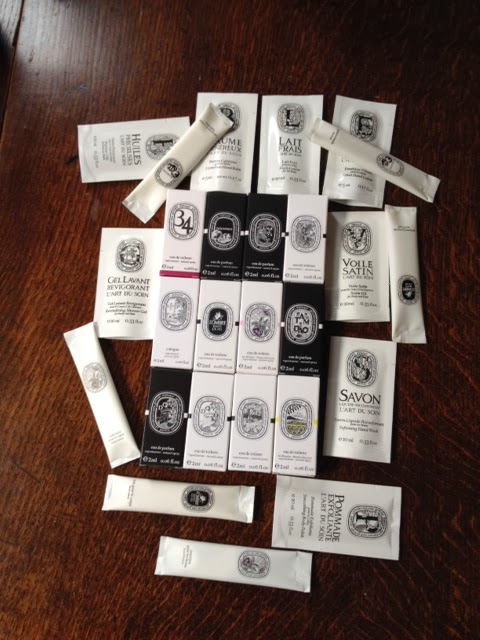 So at some point in the anti-climactic week that followed my dismantling of the Christmas tree, and spurred on by Undina's recent - and uncharacteristically impulsive - purchase of Diptyque Volutes edt, I finally cracked and bought it myself.  After all, Undina and I own 'her and her' Burberry lipsticks in similar tones of pinky nude, so it feels not unfitting that we should also have twin bottles of this beautiful smoky scent.

I had just drained the sample of Volutes edt given to me by Tamsin when she visited, and couldn't bear to be without it, however laughable that may sound coming from a person with a very bad case of SABLE syndrome ('Stash Above And Beyond Life Expectancy' for anyone unfamiliar with the acronym).

When my bottle arrived from the Diptyque store in London, I could not believe my eyes at the cornucopia of freebies that came with it, occupying not one but two drawstring bags.  (I hadn't mentioned that I was a blogger, in case that might just have prompted such unusual levels of largesse. ;-) )  One bag contained a dozen samples of other perfumes in the line, all housed in dinky little boxes and including the edp version of Volutes, which is fundamentally different from the edt.  The other bag was stuffed with sachets of bodycare products - every kind of pampering unguent, oil, creme, lotion and gel known to man, and quite a few that aren't ('milky veil for the body' and 'smoothing body polish' being chief amongst them).

So yes, I think Diptyque just raised the 'Gift With Purchase' bar a few feet...or can you top it?  What's the best haul of complimentary gubbins you have received with a perfume purchase?

But for now though - and notwithstanding the fact that it is only January 12th - I think this may just prove to be the customer service coup of the year!

Hmm, and so much for my resolution about not buying any more full bottles in 2014...;)

Wow! The last bottle I bought from a Diptyque concession came accompanied by a single perfume sample, and the one before that came with nothing. I can't complain though, because I've definitely been the recipient of customer service largesse in other cases. A purchase of 2 perfumes from Chantecaille last year resulted in my being given 8 carded samples of perfume and a make-up bag stuffed with samples of just about everything in their skincare line, including several that were about a third as big as the full-size product.

Lucky you! I contacted Diptyque by email last week and begged for a sample of Volutes becuase my lemming is that bad. I was told they didn't have any samples but sent me a high resolution photo and a press release instead. Er, thanks for that.

My best freebies have been from the Dior counter in Selfridges, as you know :) Although that has been with and without a purchase.

Enjoy your Volutes! I don't think you'll regret it.

Sorry to hear that your freebie experience with Diptyque has been rather underwhelming by comparison, though it looks as though Chantecaille have more than made up for it. And you may be the winner on *size* grounds, with your generous make up minis. Sachets are less user-friendly in that regard. A degree of ripping and messy squidging may ensue!

You can't wear a high- res photo, what are they like! I have had the same experience with other houses though.

Can your lemming wait till we see each other next? I have had two parcels go missing in the post lately, so am feeling a bit twitchy about that. And I promise not to give you a picture...;)

PS Re the Dior 'samples', which I want to put in inverted commas, because they are so generous(!), I feel indebted to you for your successful foraging missions on my behalf. ;)

Wow. That is quite something. My best GWP was 3.5ml boxed samples of Dries van Noten and Parfum de Therese that I got when buying the travel set of Portrait of a Lady. At Liberty of all places.
Worst experience was at SpaceNK where I bought quite a lot of stuff and asked for a Dyptique sample. The woman looked at me as if I had demanded her firstborn before telling me that :"High end perfume houses don't do samples." Yes, my dear.

Whoo, that was a good haul from Liberty! (As you say, 'of all places'.)

My experience at Space NK has been similarly snooty. No samples, and I don't think they even liked the fact that I was spraying the testers!

The best I got was when I bought LPRN (original) from that Belgian Guerlain boutique (forgot the name again) - it was a box full of all Chanel Exclusif samples (all of them).

I just checked my post about the store and it was the Haute Parfumerie Place Vendome in Waregem - a bit of a mouthful at the best of times. ;) Wow - a boxed set of the whole Exclusifs samples sounds absolutely amazing. You may take the award for 'quality & quantity of haul', if there was one!

Wow! Gulp.. That's some serious freebie. I've lost my lovely SA at Selfridges and was also told the same story as Sabine that 'niche perfume houses don't supply samples'. I was in a hurry to meet friends but I would have loved to have directed her to 'the draw' that exists under the till. Remember it, where that lovely blonde lady delved into? She clearly doesn't read blogs as none of us would have anything to write about without samples. I simply made a cross between a chuckle and a glower and left.

My best haul was one passed on to me - a friend's mum bought a (probably very expensive) skin treatment and was given a good dozen perfume and skin care samples. I parceled them out to several people.

To paraphrase Luca Turin about SAs (after a bad Chanel experience): not all are snobby and misinformed, but at least ONE is... AnnieA

I adore Volutes, and have been meaning to get a bottle!

I did have a great GwP experience last spring. I was in Neiman Marcus in San Francisco. I bought a bottle of MFK Lumiere Noire Pour Femme, and a bottle of Dior Collection Vetiver. Both the Dior SA (the lovely Hilary), and the gentleman at the MFK counter treated me very well. The gentleman gave me a small shopping bag full of other perfume samples - including the entire Ramon Monegal line - and some lotions and potions. Hilary gave me a few Collection minis. A very productive day, indeed. I love the SAs at NM in SF - they are always kind and genuine.

Then we went to Barney's where I bought Iris Poudre. Nary a sample in sight. *Sigh*

That's interesting that you have been spun the same line about high end perfume houses not giving away samples. And I think you may mean 'the drawer'? 'The draw' leads to a different kind of giveaway. ;) So has the generous SA left the company, then? I hope she wasn't let go for being too forthcoming with samples!

That was a nice windfall from your friend's mum, and kind of you to redistribute them in that way - I don't think I can possibly use all this lot myself, so may end up doing something similar.

Glad to meet another Volutes lover! And I am most envious of your Ramon Monegal collection - wishing I had got a sample of Ambra di Luna when I had the chance in Paris. And you scored some Dior minis and other lotions etc. A good haul indeed and lovely sales people, by the sound of it. Shame about Barney's though. And you made a FB purchase - I am surprised. :(

Wevelgem, sorry! I am forever getting those two mixed up. :-) Birgit has an interview with Steven Verstraete up today on OT!

Wow, you're so lucky! I haven't heard of this brand, but their generosity is outstanding! One company who's been lovely to me has been Hermes, who sent me four samples by mail just because I asked. How lovely!

First - congratulations on your new bottle! It feels great every time I wear it so I hope you'll feel similar.

Every time I shop at Nordstrom I'm getting everything I want and then some since I shop from my favorite SA. Unfortunately, they have only that much of what I want. My Volutes EdT also came with a lot of goodies from the brand.

From other places, if I shop in stores, I usually also get enough samples to feel like it was a good haul. Boutiques (Guerlain and Dior) in Vegas were always very good to me.

The worst experience I had twice with - surprise! - Ormonde Jayne boutique. The first time my friend was buying for me two sets of travel sprays in the store and asked if they had any samples... They offered him to buy the Discovery Set. Yep. "Since you're buying two full products why won't you buy also a set of samples that include the same two products?" He did. That purchase had not a single "freebie" with it. The second one was more recent: with the purchase of Ta'if Parfum (!) I got a single sample of Ta'if EdP. You know, it's not like buying a $300 bottle you're a real potential customer for other perfumes...

I do feel great when I wear Volutes, and can see me wearing it a lot more, now I have enough to 'waste'! Pleased to hear you are well served by your SA at Nordstrom - well, within the constraints of their stock policy versus your lemming flock - and that your own Diptyque purchase came with a good haul of free stuff.

But what a poor show on the part of Ormonde Jayne in how it treated you and your friend - 'buy your own gift with purchase' - whatever next?? And one small sample of Ta'if with your Ta'if.

That reminds me of the dinner party where the host had forgotten to cater for the vegetarian guest. In the end he just served them boiled rice, and as he passed around the bread rolls that went with whatever the main (meat) dish was, I quipped to this unfortunate vegetarian: 'So would you care for some white carbohydrate with your white carbohydrate?'

I am glad you had such nice treatment from Hermes. They are the brand I often cite for their generosity with samples - I am not sure where you are based, but they seem to be consistently forthcoming with those lovely, long, wand-like vials the world over. ;)

You made me laugh with this last sentense. But I'm surprised: what did you eat there in general? I'm asking because even not being vegetarian I always have plenty of food that is suitable for those who is...

The rest of us had a chicken curry, I think, and the host had also forgotten to get any ethnic accompaniments such as poppadums or naan bread, hence the offer of conventional dinner rolls instead!