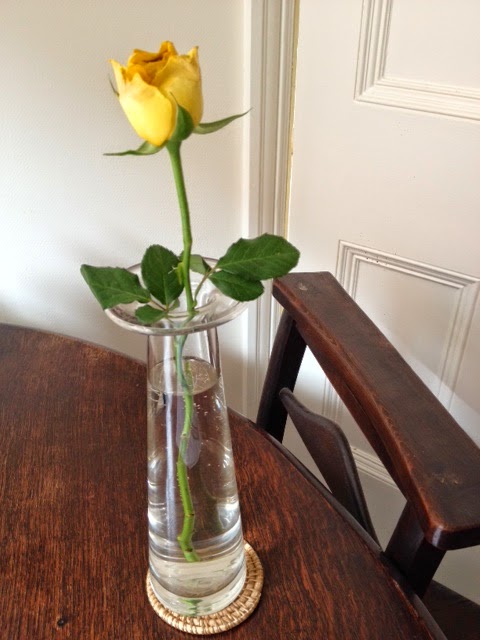 Goodness, there seem to have been a fair number of scent crime posts lately - either that or I am just becoming more irritable in my old age...but here we are at No 14 already.

Some readers may remember my post last year, which could perhaps be described as a paean to the roses in my garden, and the variety of their scents. Okay, one or two didn't appear to smell of anything - for reasons I never did quite fathom - but mostly they did, with the peachy-pink and yellow ones coming out on top of the fragrant league table.

Nine months on, my garden is still going through its kaleidoscopic spring flower display of cherry blossom and clematis, with the odd splash of scarlet from an errant tulip, or bank of yellow from wild poppies. I did, however, have a strange encounter with a rose recently - in an Indian restaurant, to be precise.  A group of us had gone there last Saturday night, and the customary ritual at the end of our meal of hot towels, a complimentary tot of some unspecified liqueur, and After Eight Mints was swiftly followed by the bestowing of a single long-stemmed yellow rose on the ladies of our party, to wit my friend Clare and me. 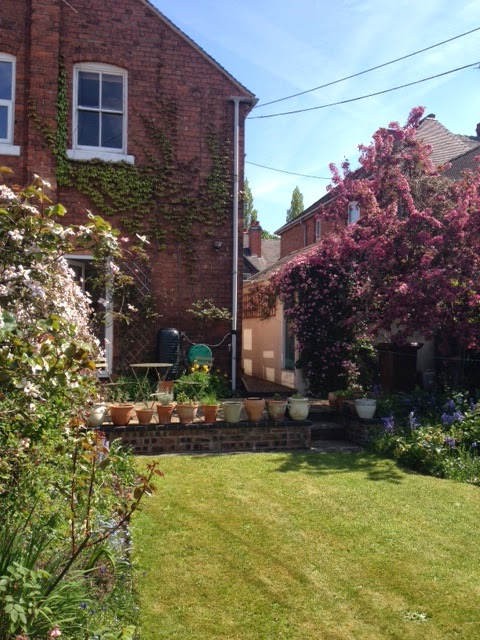 Well, the first thing someone like me is going to do when presented with a rose is have a jolly good sniff, isn't it?  So imagine my surprise when my nose was greeted by a very artificial-smelling vanilla scent - of the same calibre as those cheap tea lights you get in pound shops, if you know what I mean.  Now I love vanilla as a note, but this was a very poor rendition, trust me. So I immediately made a moue of disappointment and instinctively thrust the flower in the general direction of the waiter. 'Look, it seems to have had perfume sprayed on it!' I exclaimed in a tone of shocked concern.  The waiter was inscrutable on this point, and promptly disappeared into the kitchen, giving just the ghost of a shrug as he went.  But I knew the restaurant had to be responsible...for I have protested my own innocence before now, following an act of stealth perfuming.  I am thinking of the time I spritzed ex-Mr Bonkers's side of the bed with L'Artisan's L'Eté en Douce to extract humorous revenge for a slur on my laundering capabilities (it being a very laundry musky style of scent, you see).  The full escapade is recorded here.


Meanwhile, Clare agreed that her rose also smelt odd and had plainly been tampered with, but we dutifully carried our flowers home, whereupon I put mine in water and went to bed.  The next morning I came downstairs to find the unpleasantly cheap vanilla scent still permeating the immediate surroundings of the dining room table.  Moreover, the petals looked visibly withered and darkened in colour.  'Oh dear', I thought to myself, 'the aromachemicals in the fragrance must have got at the petals in some way - unless the rose was not long for this world anyway.'  Deep down though, I suspected the perfume of having hastened the poor plant's decline, but maybe some horticulturalists out there can confirm this either way. 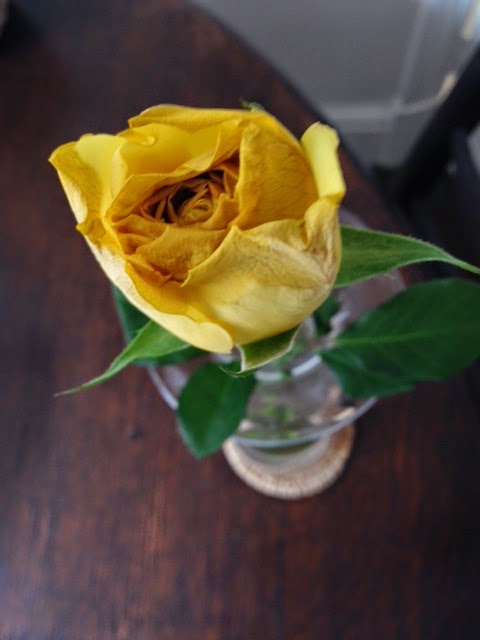 So I have to ask - have you ever come across an artificially scented rose - in an Indian restaurant or anywhere for that matter?

And if so, in your opinion is the spritzing of roses with perfume injurious to the health of the flower?

Hmm, I must say this incident certainly brought the message home that in certain instances - on plants as on the public at large - 'no perfume is better than some'...
Posted by Vanessa at 22:07

Interesting - I haven't seen artificial flowers with a scent. Did they look quite classy or not? I suppose reed diffusers look a bit weird, like spills for lighting fires.

Oh, you had spicy flowers at home? Sounds like 'indirect spritzing' is the way to go!

Carol, isn't it? Next time you have an Indian meal be very vigilant is all I can say. ;)

Never heard of this before, V. You'd think they'd at least have spritzed with rose rather than vanilla! Very lazy stealth perfuming at that. Definitely a case of no perfume better than some.

Oh, thankfully no, I haven't had the bad luck with artificially scented flowers yet ! But Bonker's garden looks ab fab. I don't have a garden, unfortunately, but few large pots on my balcony. And in one I combined a yellow Tibetan Rose (with a very faint fruity scent) with purple Honeysuckle (with a lovely and quite strong scent)...

How bizarre. I've never hear of this either. I would think that its those same "toxic chemical" that can cause cancer and sperm damage in this article that I found when googling "Does perfume harm plants" (yes I know - what a nerd).
http://www.rodalenews.com/perfume-ingredients
It was the first article that came up and doesn't have one word about plants, mind. And incase anyone would like a button there are these:
http://www.ourlittleplace.com/buttons.html
Sorry I couldn't come upi with anything of any help - I got lost in the rabbit hole of ridiculous tangents of how perfumes are rising up to kill us in the fragrance apocalypse....

I would think though, to sort of answer your question, it might have something to do with the alcohol or a synthetic ingredient in the perfume that affects the petals?

Veerrry strange. And so very wrong!

Never had this happen (not with a real flower, although I have smelled silk flowers that were sprayed with scent, which doesn't make them seem any more real). :D

Same as J. above, the only artificially scented flowers I came across were artificial flowers that were a part of a difuser. The idea of scenting a real flower with any perfume seems a little... bonkers :)

What an obvious and good point about spritzing with a rose scent! I didn't even think of that - I was just reacting negatively to the vanilla. Mind you, would they have known where to find a nice rose scent if a bad vanilla is the best they can come up with? ;)

Glad you haven't had any floral encounters of a malodorous kind! Thanks for saying my garden looks nice. It was at its best the other week. Love the sound of your fragrant pots - sounds like you are making the very best use of the small space available.

Took a look at the article in the link and I will certainly steer clear of that Halle Berry scent now - why, I have enough 'thyroid disruption' as it is, hehe! Very sad about those anti-perfume buttons - or badges as we call them over here. Such an extreme stance to take. And who knows what the petals didn't care for, but they were not a pretty sight the next morning...

Yes, artificial flowers sprayed with scent seems to be considerably more common - and they are of course better placed to withstand the spritzing! I can well imagine that it wouldn't increase the verisimilitude, mind. ;)

Ah, that sounds a bit like what Joshua mentioned. And I do agree that scenting a real flower with perfume - even if it was sadly scentless to start with due to hothousing or whatever - is a bit nuts!

Spritzing real flowers with scent is an abomination. The End. --AnnieA

BTW, did you notice that the word "diffuser" was a link to said diffuser? (for some reason in the comment it's not obvious, at least in IE).

Oh no, I didn't - not obvious to me either, but will take a look!

Got it! Shades of Marc Jacobs Daisy...?

Yuck-um no! Thank heavens, I never have come across this particular bit of dreadful.
I've been wearing Eau Frappe today and that is so lovely (thanks for the sample) lemons that smell like roses, heaven. But I cannot understand why anyone would spray cheap vanilla on a flower.

So very wrong, isn't it? And do you know I was thinking of Eau Frappee as I wrote this post, because of the yellow colour of that unfortunate rose, and my knowledge of how good yellow roses can smell when crossed with lemon sorbet...;) Today was pretty warm and Eau Frappee would have made a great SOTD in fact!

How bizarre! I have never encountered anything like this.

That's...just...weird. Perhaps I'm cynical, but an artificially scented flower doesn't actually surprise me--though I've never run into one. It's using a non-rose scent for a rose, especially when inexpensive rose scents are so common, that seems especially weird.

That is indeed the nub of it - why not a rose scent, when, as you say, there are many cheap options available?