CONTENT ADVISORY - This post plumbs new depths of tangentially scent-related trivia - no bathroom pun intended. ;)  And that should perhaps be 'shallows'?

I am afraid my posting rhythm on Bonkers has been a bit disrupted of late - partly by a phase of 'extreme research' into bathroom fixtures and fittings, as I embark on the next major home improvement project. My ongoing visits to bathroom showrooms even spawned a blog post, but the unbridled silliness that follows here is nothing to do with my current preoccupation with sanitaryware, but rather with an amusing status update I spotted on Facebook.  In it my cousin's wife, who recently celebrated the wedding of her daughter in Canada (the location is significant) writes:

"One day soon, I will inevitably spray myself with maple syrup and pour Chanel No 5 on my pancakes."

Sue's jokey post struck a chord with me, and I idly started to rummage in my own pantry for inspiration.  It took a matter of mere moments to assemble a collection of store cupboard staples which could readily be confused with fragrances - based mainly on bottle shape in my own case, but sometimes also on the colour of their contents.

I kicked off with this bottle of extra extra virgin cat's pyjamas organic bio olive oil featured in my recent post from Berlin.  It is rather reminiscent of Givenchy Pi, don't you think? - just lose the bizarre top and slightly tweak the trapezoid angle - why, it even has Greek letters on it to boot!  Then before I knew it I was on a roll... 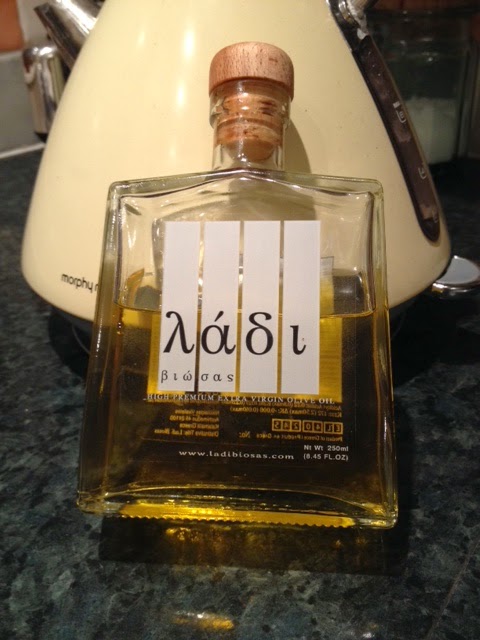 Bottles of olive oil - or the ones in my cupboard, certainly - seem to come in particularly kindred shapes to perfume, as evidenced by this one, which - through half closed eyes at least - is a dead ringer for the Bois 1920 range.  Oh, okay, it really needs broader shoulders, I can see that: 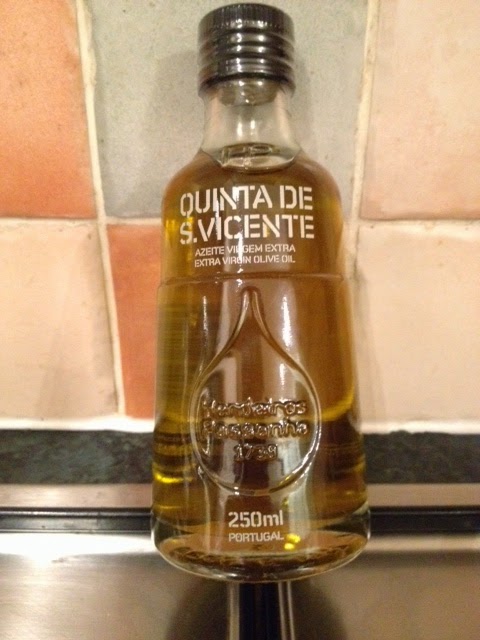 And then there is that good old accompaniment to fish and chips, Sarson's malt vinegar, doing a pretty decent imitation of J-Lo's Glow and its various flaming flankers... 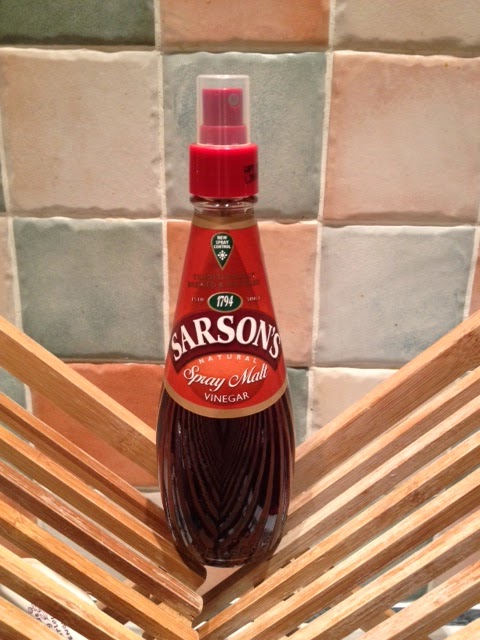 Hmm, what about the staple food of my house plants, Baby Bio, giving those ornate Ajne bottles a run for their money... 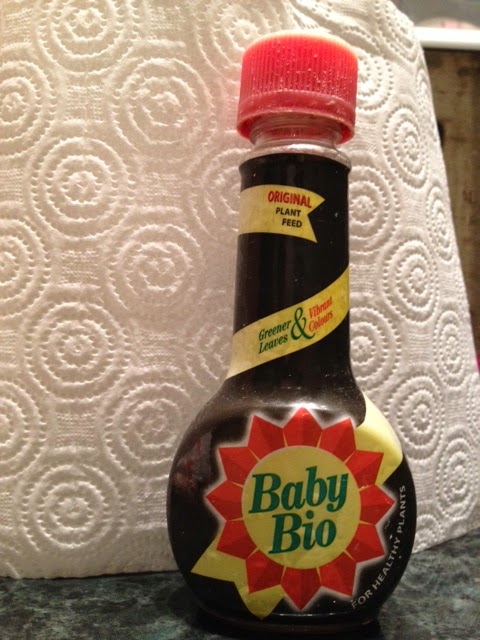 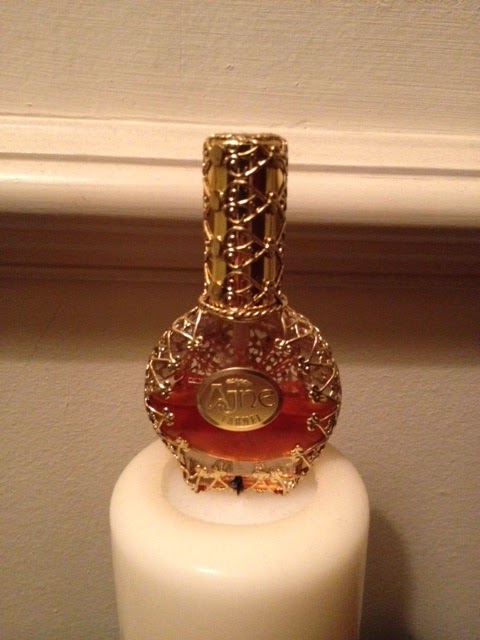 And finally, I feel sure there is a perfume bottle opposite number for this sweet chilli dipping sauce, but it eludes me for the moment.  If you have an idea about that, or can think of any other frivolous pantry and perfume bottle pairings, do let me know in the comments.  I also had a tall bottle of Styrian pumpkin oil that was a near miss for Profumi del Forte, but the neck shaping was quite a bit off.  I mention this just in case anyone was thinking of giving me a present of fancy cooking oil in the near future.  I think I am luxuriously well catered for in that department thanks, as I have two more bottles besides those (albeit with unremarkable contours). But for the record more gin would always go down well... ;) 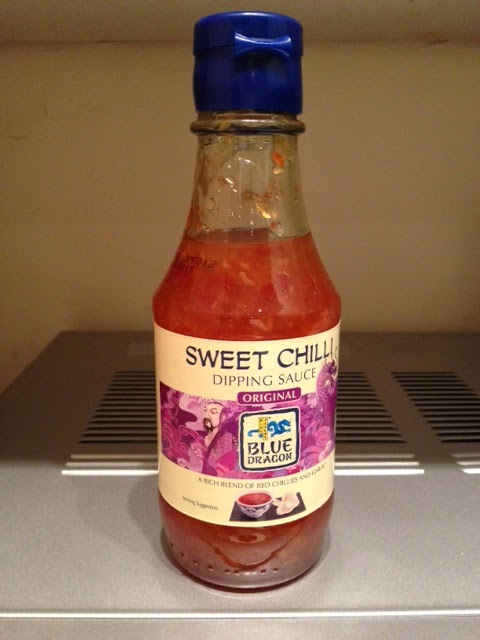 Oh, and if anyone has any remaining appetite for things beyond the kitchen that are also shaped like perfume bottles there's a round up of other oddities here.

You have the most interesting condiments...
I have a soy sauce bottle that looks a lot like Kenzo L'Amour. :D

Why, thank you. I was inspired by Germanic culture to acquire the Styrian pumpkin oil bottle. In fact I must google where Styria is. Well I never, it is none other than Steiermark, The Green Heart of Austria! I will think of you when I drizzle.

And your soy sauce bottle sounds charming - what elegant contours it must have. ;)

Oh, please, don't dab sweet chilly on your wrist ! (although some olive oils smell devine, and in fact, I'd welcome a maple sirup note in parfum,..)

Haha, what a funny post, Vanessa!
My husband always jokes about the Comme des Garcons bottles looking like flasks. One day he'll take a sip of Blue Santal or Silver Words and spray some Grappa on his wrist...
This reminds me of a scene from "Gone with the Wind". Here comes a link with a picture of Scarlett O'Hara drinking her cologne to mask the brandy smell:
http://www.southernbellesimple.com/2014/03/blast-from-past-sunflowers-perfume-or.html
Greetings from a very summery Berlin
Anka

Vanessa,
That is the daftest and BEST fume blog post of the year! My article on Adam Ant's Pants and Chambre Noire pales in comparison.

I would like to add my two-peneth and suggest that the sweet chilli sauce shares a similar shape to Caron's Royal Bain. Although I a whopping great Caron fan, Royal Bain was not a great feat and it's possible that an application of sweet chilli behind the ear might be preferable.
x
Sarah

I promise! It is waiting for me to get my act together and do another stir fry...Now the olive oil pictured above - the Pi shaped one - does smell divine in fact, and I have been known to lick my fingers when I spill a drop - it is kind of floral and nutty all at once, and very light too. At 14 euros a bottle it had better be transcendental, and it is!

Hmm, I feel sure there are perfumes out there already with a maple syrup note in them, but my mind has gone a blank.

Hey, glad you liked it! I very nearly canned this post though, thinking I really am going too far down the route of gratuitous bonkersness...

Comme des Garcons bottles as flasks - why, I can see that! Your husband may need to label them clearly to prevent a mix up with his spirit collection. ;)

Oh wow - I have not actually seen 'Gone with the Wind' and I loved the picture in this blog post of Scarlett swigging perfume. I wasn't as far off the mark as I thought with this post theme, then...

Kind of you to say so, and as I mentioned to Anka above, I very nearly wimped out of posting it. I thought your Chambre Noire post perfectly entertaining actually. It had added appeal of course because the bass player and guitarist in my favourite band were founder members of the Ants...;)

I had to google Caron Royal Bain and it absolutely does look like my sweet chilli sauce! Good spot. I have already promised LJG that I won't wear the condiment as perfume, but if anyone is feeling bold, in the spirit of scientific inquiry they might like to go ahead and see if it is in fact an improvement on the Caron.

My dear V, I believe Sarah is spot-on about Royal Bain de Caron, which I was about to suggest. Loved this post! Speaks volumes about your immense creativity :D

The Caron it is, then!

Kind of you to say that such posts are born of creativity...some might say I am merely puddled!

Excellent post. Can't believe you nrealy didn't publish it. We can never have too much fun with perfume.

I love the term "extreme research". I bet you even go to page 2 of the Google search results :)

What a funny post and pics, although what a nightmare scenario to accidentally pour extrait de parfum over your pancakes. However, for instance a l'heure bleue scented sirup to go with ones pancakes... Now, that might be something ;-)

Thanks, I shan't shy away from 'extreme silliness' in future then.

Oh yes, spilt extrait would be appreciably worse than spilt milk, that's for sure. Am trying now to imagine a L'Heure Bleue scented syrup...hmm, the heliotrope might connote an almond aspect, I imagine!

No such thing as "gratuitous bonkersness" just gratis bonkersness which is exactly why I love your blog and your funny and unique perspective.
Fortunately my condiments are placed well away from my perfume bottles, but in the bathroom I have come very close to using the tube of moisturizer when I meant to reach for the tube of toothpaste.

If you're puddled then so am I, and I'm happy for that :) I think it's lovely that you post about flowers in Indian restaurants, cooking ingredients shaped like perfume bottles and bathroom fittings while linking them to perfume. Truly a visionary!

You are most kind, and I feel emboldened to be flagrantly tangential in terms of my topic choice from now on.

Whoo, I can easily picture that near miss tube of moisturiser confusion. I have definitely tried to wash my hair in conditioner a few times - that didn't work.

Thank you! I will post as the whim takes me then - it is surprising how often perfume hovers round the margins of everyday life...

Oh my goodness! I am somewhat in awe of your ability to spot these, and of the more-than-passing resemblance of those glass vessels. It (strangely) reminds me of being in a glass museum and walking quickly past all the cases with a glazed expression, muttering "glass jar, glass bottle, another glass jar, more glass jars ..."

I am undecided as to whether it is a skill to be able to spot these similarities, or an ailment. ;)

I can relate to 'museum fatigue syndrome'. Definitely true of glass artefacts, and particularly so of ancient pottery shards.

It's hilarious! And I should say that I have almost the same attitude towards both liquids on the first picture: I know that millions of people like them but I can't see myself using either of them ; -)

Probably a good thing on balance that you have no perfume lookalike bottles in your pantry - it can only come to a sticky end. Well, oily certainly.

Too funny. So true. I have the Givenchy Pi bottle in our bathroom, neglected and looking not like perfume that I want and can't imagine sprinkling on salad. Thanks for making me laugh.

How funny that you should own a bottle of Pi, unhappily suspended in functional limbo!

They used to say (and perhaps still do) that men are attracted to the smell of pumpkin pie, but I think we should add another: Sriracha. It seems to be every guy's flavor of the month, these days.

Interesting...I had to look that sauce up - maybe it is heading this way!