Anyone who read my review of Puredistance BLACK last year may remember a reference to my friend Ruth, who featured in my 'visualisation' of the fragrance, as the PR blurb urged us to do.  I imagined her wearing either Bvlgari Mon Jasmin Noir or Ralph Lauren Notorious, which are both scents that smell terrific on her. She actually turned up that night rocking Carnal Flower(!), from another sample I had given her. Ruth's recent scent discoveries are not the subject of this post as it happens, but rather the remarkable interest in fragrance which her seven year old niece Noura is currently developing...

Noura lives in the Shetlands, where Ruth is also from, and where her elderly mother and a couple of her siblings still live.  Nothwithstanding the challenging logistics of getting to this most northerly part of The British Isles, Ruth goes over there quite often to keep an eye on her mother and generally catch up with family.  Following a recent visit, she reported that her niece Noura had 'made' a perfume and ceremoniously presented it to her grandmother, Ruth's mother, as a gift.

My ears immediately pricked up when I heard this tantalising titbit of news. 'How do you mean..."made"?' was my opening question.  Ruth conducted further inquiries and reported back that Noura had spritzed a carefully chosen selection of readymade perfumes into a receptacle of some kind - presumably a spray bottle - given it a good shake, and pronounced her creation good to go.  So obviously I wanted to know which perfumes had made the cut and been included in Noura's proprietary blend, and to my delight, Ruth came back with a scanned copy of Noura's actual 'perfume recipe'! 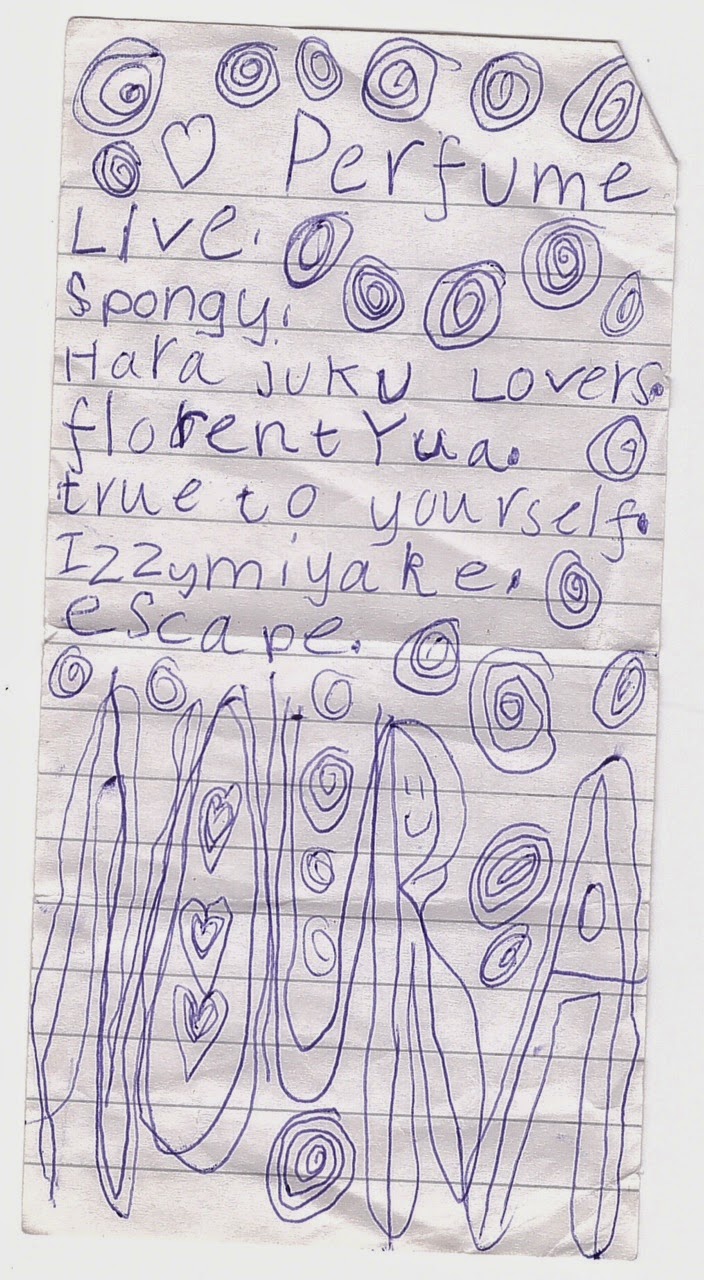 So, for ease of reference, these perfumes are set out below - not necessarily in order of magnitude in the overall formulation, to which I am not privy.  I have also added a bit of information on each 'ingredient' where known (and not likely to be familiar to readers already, as in the note list to L'Eau d'Issey, say):

'About living in the moment, feeling truly free...A truly floral oriental fragrance.'  And fruity, it looks like!

Well, who knew that the Nickelodeon cartoon character Spongebob had a perfume range? No note information was available, but I found this description: 'A flowery refreshing and lovely floral with sweet and citrusy fruits'.

And better still, a video clip featuring a perfume store(!), albeit not in a good way...;-)

Golly, Noura is not shy of coconut! ;)

Hmm, Noura appears to be a bit of a big white floral- as well as a fruit and nut-loving girl?

True to Yourself (haven't managed to find anything out about this one - can anyone help?)

'A floral woody marine scent.' Hmm, do I detect an aquatic sub-theme?  And a bit of a penchant for peony, which features in both L'Eau d'Issey and Live.

Wow, Noura's recipe is shaping up to be the full fruit salad, what with the fruitfest of Escape, the pineapple and redcurrant in Live, plus a fair few apples and mandarins along the way!  And I see that Fragrantica describes Escape as having a hint of a marine scent about it, echoing the general vibe of L'Eau d'Issey, which is of course as fruity as it is aquatic.  Yes, I get a huge melon note from it along with an abience of freshly exited shower cubicle.

Another thing that strikes me about Noura's selection of perfumes to go in her creation is the fact that several of them are quite 'old' - well, if you are only seven, I mean.  Two of them date from twenty odd years ago, which is three times Noura's age.  So in terms of her generation, you might well say she has 'classic' taste.

I have not met Noura, or smelt her perfume - I haven't even ascertained if it has a name or not, though 'Noura' strikes me as as pretty a name as any.  It is Arabic in origin apparently, and means 'inner light'. Apparently Noura likes to wear perfume whenever her aunts are around - and generally, I shouldn't wonder. I plan to send her a package of samples when I get a minute, for I believe Noura the nipper sniffer should be encouraged as much as possible!

After all, we could be looking at the next Christine Nagel or Calice Becker... 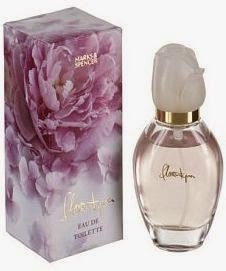 I agree 100%. Noura should be encouraged to develop her creativity in this way, and as you say she could one day be an up and coming perfumer. I am sure she will be thrilled to receive some samples. Hey how about every one who reads your blog sending Noura some of their samples - let's spread the perfume love? Seriously I would be happy to do this & I am sure others would too. Holly.

Thanks for your kind offer - what a lovely idea to think of Noura receiving perfume packages from different places. Probably only practical for people who are relatively local, I guess, on account of the dreaded postal regulations.

I will mention it to my friend and let you know the upshot.

Ahem I have received lots of perfume samples from France & the USA, which were described as 'gifts' & which arrived very promptly ! Holly

Lovely post. Noura sounds like a sweetie and I loved seeing her recipe. Such a pretty name too with a gorgeous meaning. This was a joy to read.

Of course I now have to bring it round to my niece age 5, who I think is developing a really great snse of smell. She told her mummy that a tea-towel smelt of Nana's house and indeed it was one mum left round there. And today in the car we had the window down and there was a quite a strong aroma of charcoal. Mia said "What is that amazing smell!". I have high hopes tor that one.

I know, absolutely, and I routinely send 'haberdashery items and bookmarks' round the world...;). However I know that some perfumistas are wary of the regs and tend to ship nationally. Think of those competitions on blogs where the winners must be US-based to qualify, that type of thing. Some swappers on MUA only do domestic swaps as well. So I would understand anyone's reluctance to participate in a mailout to Noura if they were further afield, is what I meant really.

What a great story about your niece and the tea towel. I think she could have a career in forensic science one day as well as being a budding perfumista. I am sure that seeing so much of you will be rubbing off on Mia in a good way. It is in these early formative years that scent memories are forged of course!

I'm a bit envious of Noura. I did experiments along these lines but got in trouble for wasting good perfume. I always thought they ought to have gotten me that chemistry set.

What fun to hear about Noura and her wildly fruity creation (which I wouldn't hesitate to try ... in fact, it might be my kind of thing)!!

And I agree with you, Vanessa - the name Noura is beautiful and would make a great name for a perfume.

Hey V! What a fantastic story. I love her inventiveness. (Please don´t ask me to try any on my skin though!!) I too would be happy to send her at least an encouraging alpine postcard. Anonoymous hugs and busses. CQ

What a fun recipe:-) A step above most children's attempts at pouring water over flower petals and leave them in glasses until they go mouldy.

Haha, what a shame you were discouraged in that way. Ah, chemistry sets - my friend Rosemary had one and used to bring it round to play with me. My dad could never recall the name of any of my friends, so referred to her as 'the one with the chemistry set'. She did go on to be an industrial chemist, I am pleased to tell you!

Noura's creation does sound luxuriantly fruity, I agree. What with the addition of coconut and coconut cream - and pineapple from Live - it might smell rather like a floral pina colada? I wouldn't hesitate to try it either, certainly. Sounds like a 'wild fruity ride'!

An encouraging Alpine postcard sounds just the ticket - I gather The Shetlands are on the flat side. Will liaise when I have spoken to Noura's aunt about it all!

Yes indeed, though I didn't even get that far when I was a kid! I do remember pressing a lizard as the centrefold in a scrapbook - it had already been severely flattened by a truck, I hasten to mention - along with flowers and foil sweet wrappers.

It worked out, though. Now I'm one of the ones with a chemistry set, and a set of aromatic materials. So there! Your friend Rosemary sounds really nice. If I had ever gotten that chemistry set, I think you'd have had to come over to my house if you wanted to play with it.

It reminds me of Everything Perfume.
You should ask for a private consultation with Noura - you might get your bespoke fragrance for a song (and samples' cost).

Haha! I wasn't aware of that project, but it's a good analogy, albeit at the far far end of the spectrum of 'perfume combining'. ;)

My internet search turned up references to "Disney Hannah Montana True to Yourself" edt, which might fit the bill. I can't find any notes for it, sadly.

I think that will be it all right - many thanks for your detective work! Not surprised you didn't find any notes for the perfume - given the way I drew a blank with the Spongebob Squarepants one. ;)

Whoo! I hope you are coming up with some great concoctions using your chemistry set - I would certainly come over to your house to play with it if you were nearer.

Rosemary did at least bring her set when she came away with us on caravanning weekends, so there was a bit of a bucket and spade incentive. ;)

It is striking that these actually seem like they would go together fairly well - or maybe that is a reflection of the cohesive taste of the person who provided that she would have all these perfumes at hand for her creation. :)

Haha - I really can't comment on the 'cohesive taste' aspect, though it is an interesting theory. I assumed that Noura was a 'lone operator' with a large collection of perfumes of her own already, but maybe some were pulled in from other family members. My friend may be able to clarify the precise MO involved!

Hi everybody ... I'm Noura's aunty and although I wasn't there when she concocted her scent, I'm pretty sure that most of her ingredients were her own. Perhaps a couple were borrowed from her mum but she is a bit of a perfume magpie alright!

Thanks for dropping by to clarify that! How great to have such a sizeable perfume collection at this young age. We will see what we can do to add to that...;)