The next day started early and on a somewhat surreal note. For as I was paying my hotel bill, the receptionist asked if I wanted to cancel my entire booking and book it all over again. 'Er...but I have just been here for two nights?' I replied weakly, whereupon the woman muttered something about this being a way of helping her to dodge Booking.com's fees while securing me a better rate. However, her cunning plan messed with my preconceptions of time in such a profoundly disorientating way that after another robust exchange at complete cross-purposes, I ended up jabbing my credit card at her, and settling the bill for the stay I had actually had. Yes, on balance I shall leave all that time travelling malarkey to H G Wells, Dr Who, and Cher.

For my scent of the day I had picked out Amouage Honour Woman, in a valiant attempt to keep the rhubarb theme going as we headed south, and out of Rhabarberschorle country. We still had a goodly on-board stash though - more rhubarb drinks than you could could shake a stalk at, indeed.

No sooner were we all loaded and on the bus than my missions for that day cracked off, starting with a series of random requests to google octopuses and squid and sundry other cephalopods to confirm whether they were in fact all molluscs or not. In the course of my research, I chanced upon a German news article about a woman who had been made accidentally pregnant by calamari - after experiencing a 'pricking and foreign body sensation'. ;). It seems the story has also been covered by The Daily Mail. Anyway, as you might imagine, the ensuing tittering and savouring of terms such as 'spermatophore', 'octo-mum' and 'squid insemination' lasted well into Thuringia. Further amusement was prompted by my verdict on a vegan chocolate bar Caryne passed round the bus: 'Um, it's like someone just poured cocoa powder over a fatty medium.' Cue comedy visions of curvy spiritualists dusted with a light patina of Bournville.

We stopped for lunch in the picturesque town of Eisenach, where Dave's vegetarian baked potato came generously topped with bacon sprinkles. I must say I thoroughly enjoyed my pork goulash with dumplings and red cabbage, and it was lucky in hindsight that we had had a substantial meal as the day started to unravel at that point - or 'go in the trousers' as the Germans say. Ugly traffic jams greeted us on the approach to Frankfurt, and once again Alaska tossed the road atlas into the back and asked me to figure out an alternative route parallel to the motorway, but still taking a southerly course. Having wiggled round the jam, Alaska checked the satnav again. It was set on taking us back north - presumably with a view to skirting round the top of Frankfurt and dropping down the west side, which it clearly thought was quicker. But we didn't know the prevailing traffic conditions over there, and I had a split second in which to advise Alaska on this fateful choice. 'Ignore the GPS, and carry on down to Hanau!'  I squeaked, not at all convinced that it was wise to flout the satnav at this decisive point in our journey. It was the most stressful moment of the whole tour for me, as there was no turning back, and I just had to hope that we would get to the venue before the doors opened(!), in time for the band to sound check. After a sprint down the A45 and west on the A3, we  made it with 40 minutes to spare, but it was a stomach churning, white knuckle ride of a near miss!

My human post-it note moment and Chinese carry out challenge

By showtime, I was able to relax and enjoy the gig. Just before the end of the set, Alaska unexpectedly broke off from his sound engineer duties, came right to the front where I was standing, and whispered urgently in my ear. Three times. On each occasion I only caught the word 'desk', as in 'mixing desk', no doubt. Now why would he want me to go up there, I wondered? I am completely clueless about all matters sound related, unless something's broken and he needs me to fetch a tool or keep a knob or a switch in a certain position while he fixes whatever the fault is. It seemed unlikely, so I decided to ignore him, and stayed in my spot. Then, a minute or two later, Alaska came bounding up to me again and this time slapped a sticky note on the lapel of my jacket, which I couldn't possibly ignore! (Since transferred for posterity to my tour notebook.) 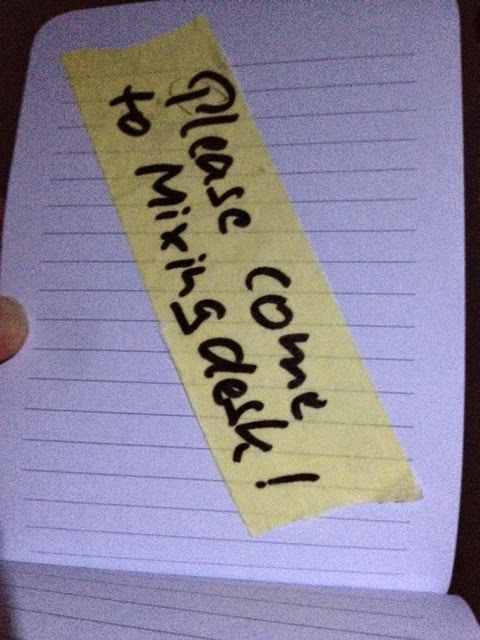 So I went to the mixing desk(!), where I was charged with the important mission of picking up a Chinese meal for the band from a restaurant a few doors along from the venue. It had to be collected on the dot of 10.30pm, which meant missing the encore. I did get invited to share the food, mind, which turned out to be the best Chinese takeaway of my life, all the more welcome after the stress of the long drive and its associated navigational trauma. ;)

The next day dawned bright and warm, with temperatures topping 20C. There was genuine concern amongst the band that we might easily end up with a 'baked Alaska' on our hands, so we encouraged him to keep his pork pie hat on at all times.


The sunshine put us all in particularly silly mood, and someone had the idea to get the band to stage a mock police hold up. 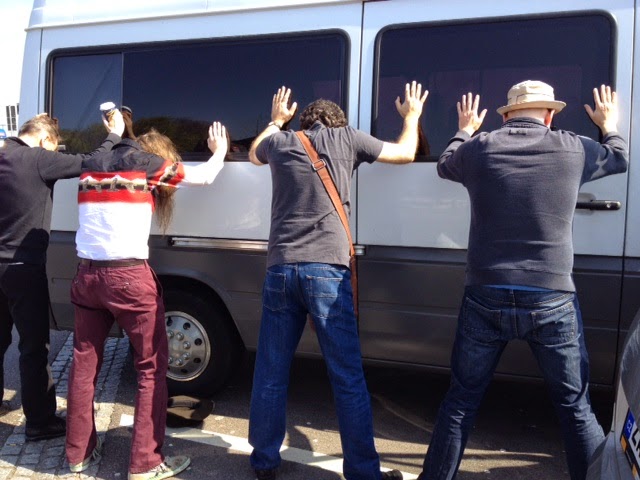 It was also on this leg of the trip that we spied our first asparagus crops, which inspired the bass player to promptly rename the new album 'Spargel Everywhere'!


For throughout our time in the south of Germany, we encountered numerous expanses of these tell-tale polythene furrows. Surprisingly, we never did eat any asparagus on this trip, though it is a delicacy I have enjoyed in the past. Here is an extract from a travel column I used to write for a business magazine (from 2007):

"I spent the last night of my trip in Trochtelfingen, which despite its small size, turned out to be a major hub of vegetable festivities, simultaneously showcasing leek pesto and asparagus.  There were entire “Spargel-Menus”, boasting asparagus in every course.  At breakfast, I spied a couple of spears nestling in the muesli, which I put down to a dish washing error rather than a case of fusion cuisine gone bonkers.  But you never know…"

We reached Freiburg in the early afternoon, and after a tasty lunch in a Sri Lankan restaurant - yet another of Alaska's secret tips - checked into our hotels. I had been to Freiburg a few times before, but not lately as a tourist, and was excited to explore the historic centre again. Set against a backdrop of bright blue sky, the coloured facades of the buildings lived up to even the most vibrant postcards on sale in the main square... 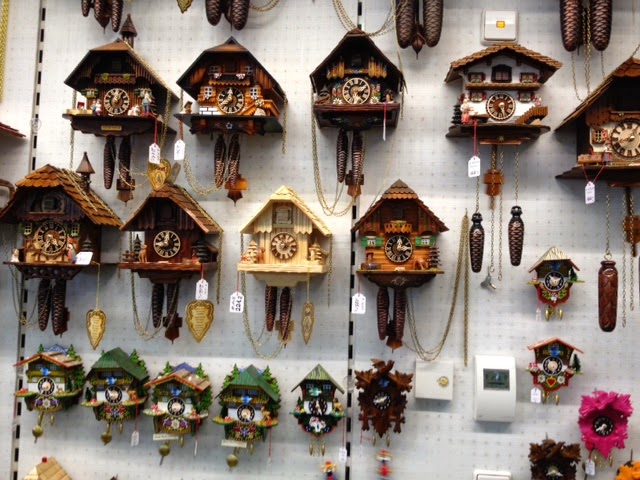 I was not completely without focus in my wanderings, however, as the singer had entrusted me with a trio of missions: pricing cuckoo clocks, looking for a particularly avant-garde style of shopping basket (I failed miserably on this one!), and buying pink and/or green roller ball pens, so that he could carry on his graffiti apprenticeship in more novel colourways. Oh, and Bid came up with a silly idea about cuckoo clocks as it happens, namely that someone could consider developing ones that emit a different scent each hour. I don't think he meant the cuckoo itself to be redundant exactly, but I am not sure how the poor bird wouldn't quickly end up smelling of 24 different perfumes by virtue of popping out in broadly the same area as these supposed scent puffs. I sense the idea, while ingenious, may need more work. 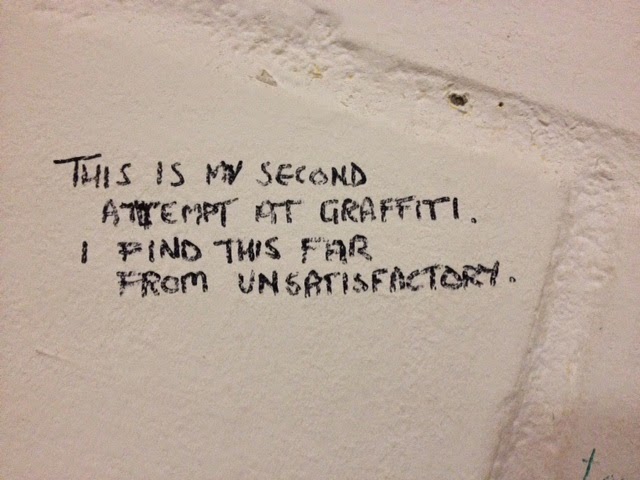 At the gig that night there was one further, unexpected task to perform...After the set, the singer beckoned me to come on stage. As with Alaska's urgent instructions the night before, I ignored the beckoning for quite some time, till it dawned on me that I really was being summoned on stage, who knows for what. Once up there, and blinded by the lights, Bid whispered in my ear: 'Tell them in German that we would normally go off now as it is the end of the set, only we can't because there isn't a dressing room! So we are just going to stand here instead and if they would like to clap and whatnot we will play an encore.' Thoroughly put on the spot, I did my best to render this in German, except that I asked them simply to 'scream'/'whoop' instead of clap, as I couldn't remember the word for applause, and also came up with a non-existent word for dressing room - 'Umzugsraum' (removal / moving room!??) instead of 'Umkleideraum', or better still, 'Künstlerumkleide', which has more of a sense of backstage dressing room. It didn't seem to matter though, as the audience brought the house down with their whooping and screaming, and the band played an unprecedented four encores...

Hey V! I will read all your Germany posts soon, but had to mention that The Moth so dislikes working on cuckoo clocks! That photo would have him cringing! ;)

Haha! I told the band I wasn't impressed with the rather touristy selection on offer, especially the inflated prices. The MOTH may rest assured that no purchases were made, not even of the conventional non-scented variety.

Loved it. Wow you really were called on for all manner of tasks.! From map reader to personal shopper to annoucer. What a great job you did on all fronts.

Is it Val next?

Thanks! The role as unofficial runner seemed to gather moss as the tour went on...;)

'Baked Alaska' is fun, isn't it? And I must give all credit to Birgit, who joked about this very possibility quite independently before this post was even written.

Val does indeed come up in my next post, which rather fittingly for an already momentous instalment, is my 500th! ;)

You did well to direct the band around the Frankfurter Kreuz. As Frankfurt is my home town, I had hoped for a post full of sausages and local cider, but I understand that your preferences are slightly different :) Baked Vanessa is rather lovely...

We had another decisive moment choosing between the A3 westbound and the 66 cutting through more of the centre. The 66 comes right out in Griesheim, where the gig was, but the satnav took us on a wider loop by the airport, then up. This time both Alaska and I jointly deferred to the voice in the machine, for fear that the 66 might be snarled up at that time of night though it was shorter as the crow flies. Yes, all in all we took the biggest loop of all to get to the gig! I guess it felt counter intuitive to go up to go down, and the A3 can be tricky at rush hour on the west side too. But who knows...

Sorry for the lack of Frankfurters and cider. We ate Chinese as you see!

If you get one, you will be fortunate.

Haha, that I would!