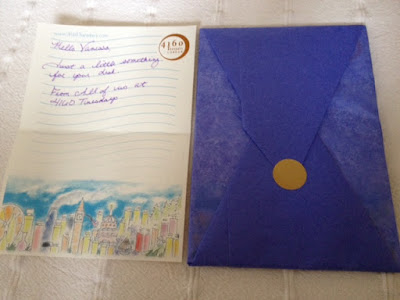 I know, I know. You've glanced at the title and thought to yourself: 'A blog post about cardboard? I'll pass on that, thank you very much...' And that's fair enough, but as an industrial market researcher I have always been interested in packaging, which has been a bit of a recurring theme in my work down the years. This in turn has prompted me in the past to blog about those 'unsung heroes of the swap scene', bubble wrap and electrical insulation tape. It wouldn't suprise me if I had blogged about Jiffy bags, parcel and Scotch / Sello-tape at some point, but I don't believe I have - yet. Or I may have written about them in passing - an observation about the apparent trend towards black and hot pink and metallic Jiffy bags, say - but not on a standalone basis.

Cologne clear out - no casualties reported!

But firstly I wanted to announce the good news that after quite a few weeks and a fair degree of nail biting on my part, all the overseas perfume packages I posted as a result of my recent cologne clear out and giveaway made it through to their destinations in Croatia, Denmark, Australia, Canada and the USA. All the packages contained an eclectic assortment of decoy items, from a wind up reindeer to an unwound paper clip, as well as tea bags, strands of wool, universal ink cartridges, torn bits of material, sweets, skincare samples, an elastic band, a lone earring, a bookmark, a button or two - and a vividly coloured coaster with reindeer on it. (I say, there seems to be a bit of an accidental reindeer theme going on....!)

For the most part, these extraneous items were nothing you would actually want or could use, but their inclusion, however token, enabled me to access whole new categories on the customs declaration such as 'Stationery', 'Jewellery', 'Artists' Materials', 'Children's Toys' - and my personal favourite, 'Haberdashery'. Had space permitted, I would dearly love to have popped in a scarf to one or other of the parcels, so I could have added 'Ladies' Apparel' to the list. Next time I might just try that with entry level apparel items like pop sox! Maybe (clean) ones with ladders in them for added comedic futility.

It seems the recipients were also amused by my creative labelling / inclusions. When two of the packages made landfall in Australia, I received a photo of them sitting on the new owner's desk with the following running commentary as she opened them one at a time:

Me: "If there's a tea bag in there, on no account drink it. It's something green and nasty."

"Shoe polish sponge. Button. I'm laughing my a*** off in the middle of an open plan office !!"

The other aspect of my postal MO to mention is that I have taken to splitting my custom across multiple post offices for the more sensitive shipments, much as people stockpiling painkillers are wont to visit a number of different chemists. I now pretty much only use my local post office for sending perfume within the UK, which is of course not a problem, except that you are limited to how many bottles you can send, and even what constitutes a bottle. For the fact that you are meant only to send full bottles in the first place is perplexing, given that I mostly want to post decants and samples. Then there is the complicating factor of the 'bottle' supposedly being in its original packaging, which the things I am sending may well not be, if I have decanted them myself.

Then the other day I was sending two decants and a sample of something to a friend - which I gaily construed as 'one bottle' on the hazardous goods label, because on aggregate it was nearer to one bottle than anything else, hehe. And because I had told the postmaster earlier that I was having a clear out of my perfume collection, which is what had prompted the earlier flurry of UK packages he had handled, on that afternoon he piped up: 'Hey, have you got any perfume going spare?' He meant for himself, as it turned out, so I am going to give him a little miniature of a unisex scent by Micallef that Sabine of Iridescents had recently passed on to me, which is a bit rosy and oudy. I happened to be wearing it at the time, and the postmaster sniffed my hand and said he liked it a lot. So the next time I am in I will drop it off, for given how globally dispersed this perfume hobby is, it is quite important to keep your local PO staff onside...

The other postal observation I wanted to make is about the packaging in which Sarah McCartney, owner of 4160 Tuesdays, had kindly sent me a promotional notepad featuring a colourful graphic of iconic London buildings interspersed with perfume bottles. It arrived in a corrugated cardboard pack that was so well sealed I had to take both scissors and knives to it in the finish. It was hard to find where exactly the ends of the package were sealed so I could insert my sharp implement of choice between them, but eventually brute force and a ragged kind of cutting action prevailed.


Here for reference is a photo of an average sting ray - bet you can't see the join on it either?


I mentioned the impregnability of her parcel to Sarah, who explained that it was a new style of 'cushion wrap' packaging they were trying out, which cleverly only sticks to itself and not to the item enclosed. Despite having done a project on single, double and triple-walled corrugated cardboard in Poland, Germany and Austria, I was not aware of this nifty technical feature, albeit the project in question was in 1996.

I think the new style of packaging is excellent for protecting contents in transit - there would be no dog ears or creased dustjackets if you were sending a book, say - but it does require a fair degree of patience and the ownership of an armoury of pointy utensils on the part of the addressee.

Not being able to send even a partial bottle within the country is ridiculous.

Love your assortment of perfume mules!

You could have knocked me over with a feather, I must say, when he said that!

It could be that sending partial bottles is okay, and it is just the original packaging that is the key. But whenever I have started talking about part bottles and decants and whatnot, the PO staff have looked very confused, and rather worried.

"Volume per item must not exceed 150ml. No more than four perfumes or aftershaves can be sent in any one package. The perfume or aftershave must be within its original retail packaging and then placed in strong outer packaging."

I think they just assume it will be a full, unopened bottle...;)

I love your packaging posts, I'm amused by your creative ways to avoid mislabelling guilt.
As for "padded packaging prompts patient prising" you have achieved awesome alliterative artistry.

I was startled by the vivid picture captcha mechanism. Does it mean the bots are getting smarter?

I don't avoid the guilt altogether, but I do mitigate it to quite a large extent with every decoy item. Or maybe it is not even guilt but simply the fear of being caught...

Liking your reciprocal alliteration too!

PS You will have to tell me exactly what you saw ref the captcha. As the blog owner I do not ever see this mechanism that readers do!

I wasn't allowed to send your partial bottle of Ta'if in its original packaging which was so annoying. I took to another post office so all was well but it just doesn't make sense to me. .

Thanks again for sending my package, it arrived safe and sound (and quickly!). And I never asked, did you receive my payment? :)

Oh yes, I did thank you very much! The payment arrived the morning after we were last in touch, just like you said.

I realised that that was the other bottle I used to own with a tassle on it! ;)

The captcha used to be a greyish set of numbers, usually 4 (looking like those on a door) that one had to really focus on to read. Now what comes up is a tableau of nine vivid pictures and one is required to check off which pictures match the stated item.
My 2 sets were "boats" and "French fries". It will be interesting to see what this one will be.

I clearly haven't recovered from Postal Regulation Phobia, because this is all making me just a little nervous. Amused, too, but nervous.

I love the idea of sending pop socks Internationally. As one of your legal UK receivers, please can I have a broken toy and a button in my next package? I'll reciprocate with a bit of rubbish plastic nonsense from a Happy Meal of which I am quite regularly partial too.

Goodness, I have never seen such a thing when visiting other blogs. ;) It sounds rather elaborate - if amusingly quirky - so I appreciate readers' perseverance all the more at jumping through the necessary hoops to comment.

I was thinking of you as I wrote this post, haha, but I didn't imagine it would be enough to help you overcome your phobia. ;)

Yes, I sense the pop socks plan may well have legs...

You can have a broken toy if you wish, no bother - would that add to its appeal, hehe? I certainly like the sound of a plastic novelty from a Happy Meal - is that the modern day equivalent of a Lucky Bag?