The final gig of the mini-tour was in Ebensee, a mere 10km from Val the Cookie Queen's home, and the family bike (and muffins!) shop, Armadillos. As things turned out, it was not so much a case of Val going to the gig as the gig going to her. Well, give or take the 10k. But getting from Ravensburg to even Oberoesterreich proved the greatest challenge of all, and at several points in the day we lowered our sights to merely getting back to England 'at some point' - ideally on the scheduled flight from Vienna the next day, but we would have settled for 'at all' when our confidence in the Teutonic transport systems was at its lowest ebb.

For the record, this was supposed to be a four train, 'bun fight, reserved, reserved, bun fight' kind of a day. We made it up to Ulm with no bother. Well, apart from a lot of noise from the many groups of revellers got up in Lederhosen and dirndl dresses to commemorate German Reunification Day. Which - somewhat counter-intuitively you might say - is in early October, although the wall came down in November. I remember it well, as I was in the country at the time! Speaking of things coming down, most of the women had that Nell Gwyn-style low neckline, push up corset thing going on, and Steve the drummer complained that he didn't know where to look for cleavage, all of it uniformly pneumatic and distracting.

Then at Ulm the games with frontiers began in earnest. Our train - which said Klagenfurt on the front (in the far South East of Austria) - was not in fact the scheduled one, but an 'Ersatz' / replacement service. This meant that the information on the 'composition of trains' board I had carefully studied in advance to minimise everyone's walking with instruments and luggage went totally out the window, and prompted the seven of us to make a mad dash to the opposite end of the platform. Our carriage did exist at least, but four of our reserved seats were in a locked compartment. Here, by the looks of the hat and jacket, a train manager had barricaded himself in, for reasons which quickly became apparent, while our remaining seats had been commandeered by three burly - and surly - looking men. I could do nothing for the moment about the locked compartment, so decided to take on the three men, their burliness notwithstanding.


'I'm sorry, but you are in our seats. We have reservations from Ulm to Salzburg.'

'We've been sat here since Frankfurt.' (This is admittedly a very long way, and it's possible that they were operating on the basis of possession being nine tenths of the law.)

'That's as may be, but we have booked them from Ulm, which is now.'

'It doesn't say that anywhere.'

'Yes it does, in blue writing above your head.'

At that moment, the train conductor saw I was having problems shifting these seat hoggers and waved us all through to the next carriage, which was first class. Our sense of triumph from this unexpected upgrade was shortlived, however. For no sooner had we sat down when a voice came over the tannoy announcing that the train was terminating at Munich. In vain did I buttonhole staff on our truncated way there about what was going on - they all stoutly denied having any information whatsoever and told us to make inquiries at the Service Point at Munich station. Yeah right - us and 500 other bewildered passengers with travel plans in disarray...


At this rather alarming point in proceedings I messaged Val, who - with the help of her friend Judith - set about tracking down alternative trains that might be running into Austria, by however circuitous a route. Once we got to Munich, I did manage to nab yet another member of staff, who told me that trains had been suspended between Germany and Austria in both directions, due to migrants clambering onto them at the border, and damaging some of the rolling stock in their desperate bid to continue their journey westwards. So instead, the Deutsche Bahn lady told us to jump on a train that was going as far as the town before the border, from where we would be bussed to Salzburg station. She reckoned that the trains would be fine once we got to Austria, albeit we were now running worryingly late for the band to make their sound check.

Val, the roadie with the mostest

Accordingly, a cunning 'Plan B' was hatched: we would take this recommended train and bus combo to get as far as Salzburg (the specific services on our cheap group tickets having long since been overtaken by force majeure-style events!), and then the best onward connection from there. The sound check was renegotiated to a later slot, and Val immediately deployed as a roadie. The original plan had been for me to jump the train at Attnang, the penultimate stop of the day, and to go and visit her home village, but instead, Val 'kidnapped' the band in her capacious people carrier and whisked them to their remote guesthouse half way up a mountain overlooking Ebensee, where they could change and briefly relax.

Meanwhile Caryne and Dave and I carried on by train on the last leg of the journey, to be met by Val at Ebensee station after she had dropped the band off at their digs. (And after she had sussed out that - most remarkably for such a small place - there were in fact TWO stations in Ebensee, and that we were at the other one. Cue another comedy moment... ;) Next Val drove Caryne and Dave to their guesthouse on the edges of town, before going back up the mountain to collect the band and drop them off at the venue. Then she picked up Caryne and Dave and took them to the venue to set up their merchandise table, before backtracking to my guesthouse by the train station - are you keeping up? I would quite understand if not, as the pace of Val's ferrying people and their assorted stuff around between the hours of 5 and 8 pm that day was positively dizzying! And I may have got the exact sequence of lifts wrong even so, hehe. So then Val was at last free to bring me to her village for a lightning pitstop: I saw the bike shop, the kitchen(!), and Val's flat. I laid eyes on her perfume collection! I communed with Meep-Meep on the balcony and she nibbled my fringe!


And in a blink of an eye it was time to go back - with Val's husband Chris now at the wheel - to Ebensee and to the gig, which was great, albeit sadly cut short, as The Monochrome Set were uncharacteristically not headlining that night. Because of this there was no encore and the band had to get the gear off stage sharpish. Which meant that at one point Val was adorned with Bid the singer's guitar, and told (tongue in cheek, obviously) to 'make herself useful' and take it backstage, with me following on behind carrying a music stand and a bottle of water that had been similarly thrust into my hands.


And after grabbing a bite to eat at my guesthouse, Val and her husband drove everyone home to their respective accommodation, up hill and down dale all over again, only to repeat the same set of journeys early the next morning in reverse - I think in reverse, but my brain is addled with it all! - so as to deposit the seven of us at the train station for the homeward leg to Vienna airport. Oh, on the final morning Val and I did manage breakfast together at my guesthouse before all of that last flurry of 'Fahrerei' / driving around - the very obliging owner was happy to set a place for a 'plus one'.

So looking back, the Ebensee leg of the tour was fraught with stress, yet full of fun and a general sense of what I can best term 'exhilarating enormity', as we tried to overcome each obstacle that presented itself. And Val herself is that rare intersection of the Venn diagram, combining my perfume and music interests in one energetic, capable, super-organised, funny, upbeat, warm and generous person. The plaudits for her help with the logistics that day are still coming in from the band. 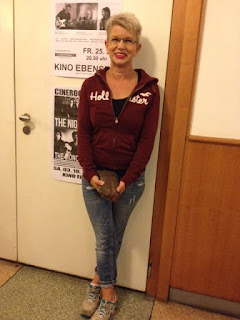 "I would be very grateful if you could pass on my thanks to Val for giving up so much of her time to help us. It would have been very, very difficult to manage without her in Ebensee."

And there was praise too for her brownies, individual rations of which were issued on our departure, including vegan variants for Caryne and Dave.

"Please thank her too for the Monochrome brownies, which were very delicious."

"Val's brownies are better than anything in the UK."

Realistically, the gig may not ever come to Val again, but I look forward to the next time Val can come to a gig - most likely in the UK now in 2016. Which will be here before you know it...Unlike trains to Austria, which may not be here any time soon...

Ah, I so enjoyed this. I knew a fair bit of the shenanigans but to see it all detailed is quite something. How the band would have managed without your German skills and Val's driving/navigational skills, I don't know.

I'm impressed with how much time you two managed to spend together with dinner, breakfast, balcony/Meepsy time and a whistle-stop tour of the shop. It's great that you share these two over-lapping passions.

Love your caption to the comedy station stop!

Glad you enjoyed it. I couldn't swear to getting the detail exactly right, but that in itself is testament to how much went on that crazy day!

That's a good point you make, that given the hectic whirlwind of events, Val and I did do well to manage three meet ups in addition to sitting together at the gig. How did that happen?!

And yes, the station name raised a chuckle in an otherwise stressful day. ;)

Oh dear. Was has happened to German efficiency? Sorry that you had such rubbish journeys.

I think the German train system is completely stretched and 'ueberfordert' at the moment because of the migrant situation. They simply don't have the capacity to help refugees get to where they want to go while maintaining services for people going about their normal business - or visitors like us.

Dearest VM.
You are a joy in my life.
And J will soon have a dirndl, although I doubt the cleavage will be very intense.
Ich hab dich sehr liebe.
Bussis.

Two words should do it:

I was trying to follow all the legs of the transportation for those two days in Ebensee and at some point it reminded me a known wolf-cabbage-goat transporting riddle ;)

You and Val were great in helping the band and I'm glad that you both had time for anything else but those band-related chores.

A special thank you from me for the picture of Meep-Meep :)

I like the sound of your wolf-cabbage-goat transporting riddle! You are a mine of great fables / stories / proverbs / jokes from your home country.

Yes, I am so pleased Val and I got to hang out as much as we did. Very much on a 'sleep when you're dead' basis, it must be said, hehe.