My lips have been on my mind a bit lately, 'bit' being the operative word. I tell a lie, the operative word is 'scratched', but try rhyming that with any variant of the word 'kitten'. Yes, I have the dubious honour of bearing facial scars from three different cats, all of whom have had a pop at some point at my lips or 'nasolabial' area, shall we say. In Truffle's case it was a playful pat with an outstretched paw, from which she had forgotten to retract the single claw that did the damage - one scratch by a nostril, one just above my top lip, plus some pointilliste red dots along the lip line that look more like a botched tattoo or the work of the dreaded 'six needles' BCG jab. Now I have long aspired in vain to the 'bee stung' look of Angelina Jolie, and have to report that 'kitten bitten' - or even 'kitten scratched' - doesn't quite cut it. Or not in the desired way, certainly. The good thing is that the little hairline scars these cat attacks tend to leave behind blend seamlessly into my vertical lip lines - one or two more is neither hair nor there.

So this lipstick post was prompted in part by the current stinging sensation I feel in that general area, and also the fact that since a succession of lipstick culls, going back to the time of this post in 2012, I have noticed my lipstick count gradually creeping up again. It appears to have been swelled in the intervening years by not one but THREE Burberrys in the end (Nude Rose Lip Cover, and Copper and Feather Pink Lip Mist), a couple of 'rude not to' £1 bargains in Poundland that are both on the pinky-brown spectrum, a whole clatter of red lipsticks and glosses - several of which I have no recollection whatsoever of buying - two cast off GWPs from my elderly friend, a few more drugstore scores, notably Rimmel Colour Rush Lip Balm in Not an Illusion (which I featured in my New Year round up post), and now my latest coup, Collection Moisturising Lip Butter in No 3, Vintage Rose. 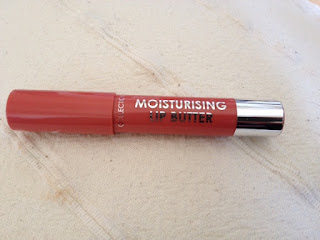 It was the Rimmel lip balm that really introduced me to the principle of the moisturising chubby stick, and I have been sold on its convenience and 'dirigibility', if that is a word, ever since. Buying a lipstick - especially from a drugstore like Boots - is such an affordable 'fillip' in these times of austerity. Well, they are pretty austere in my particular corner of the economy, anyway. And then there is that other well known phenomenon of being ineluctably drawn to keep buying lipsticks in the exact same shades as the ones you already own - which is how I came to cull my collection in the first place (and why I clearly need to have another putsch soon). In my case this purchase recidivism has focused mainly on pinky-nude YLBB sort of tones that I like to think suit every occasion and most outfits, though latterly I was also engaged on a quest for a holy grail red lipstick, and have settled in the end on Revlon lip gloss in Firecracker, one of a selection of wearable reds recommended by Katie Puckrik.

But this unstoppable urge to repeat buy shades you have already can occasionally lead to a serendipitous spin off - buying a drugstore lipstick that is a perfect dupe of something much more expensive. This is the first time it has happened to me, when, having impulsively bought the Collection lip butter in Vintage Rose (No 3) - purely for that Saturday shopping 'hit' or 'rush' I spoke of, and also because it was about £3 and looked broadly like my kind of pink - I got it home and realised it was uncannily like Burberry Feather Pink, which I had asked a friend to buy me for Christmas.

So for a laugh, the following weekend I put Feather Pink on one lip and Vintage Rose on the other and went out to meet my friends Gillie and David, challenging them to spot the difference. I can't tell you which is which in this photo from the day, but trust me when I say it really doesn't matter!

Then here is a photo I took last weekend of me wearing just Vintage Rose. 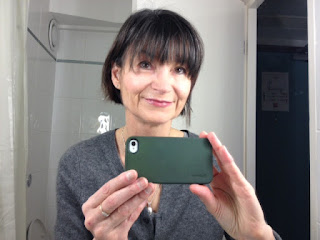 And lastly one of me today in just Feather Pink. 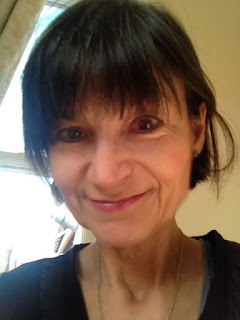 Now, don't get me wrong, I love the look and feel of the Burberry lipstick line - specifically its uniquely ruggedised diamond texture - but when my Feather Pink runs out, I doubt I will splash £22 on a replacement, when there is a £3 chubby stick that is as close as you could wish for. Certainly speaking as someone with facial scars and imperfect eyesight.

Ouch!
I have to say that Truffle definitely needs to work on her guilty expressions.
cheerio,
Anna in Edinburgh

The color looks beautiful on you.
Oh that Truffle!

Hahaha, that she does!

Thanks, Carol! It is less nude-y / mauve-y and more of a fresh pink than anything else I own, which livens me up more (which I can really do with at the moment!). ;)

I'm sure there is Lipstick Index which says lipstick sales go up in times of economic hardship.

That is an amazingly accurate dupe, and all the better for the sense of victory in its bargainousness. (Bargainosity?)

I have a rose lipstickproblem, I think. I own entirely too many and yet, I am always happy to find another one. Have you tried any of the Lidl ones? Unfortunately the make up display at our branch is alwyas badly stocked.

Thanks for saying Vintage Rose suits me - it is a new departure in freshness, but is not too girly I don't think. High time I broke away from the mauve-y end of the spectrum - I think we have similar skin tones in that regard. And the Collection lip butter is actually more moisturising than the Burberry, strange to report, albeit cheaper smelling.

Yes, Lipstick Index sounds like the term for it!

'Perplexed innocence' is a good description of Truffle's expression, haha.

'Bargainosity' shall be a word from now on!

PS Kind of you to say so.

Good to meet a fellow lipstick hoarder - I have managed to accumulate as many now as I had pre-cull in 2011! I bet rose suits you very well with your skin and hair colour.

I have not seen any lipsticks in Lidl before but will keep an eye out.

"that other well known phenomenon of being ineluctably drawn to keep buying lipsticks in the exact same shades as the ones you already own" - been there, done that. A lot. Now I have a rule: if I want to buy a lipstick, I have to bring with me a cosmetic bag with all of my current lipsticks. It deterred a purchase or two in the last couple of years (though now I'm suddenly very low on beige lipsticks - I need to remedy that soon!)

Truffle is extremely cute! (and I'm also not a stranger to a non-retracted-claw phenomenon ;))

Oh Vanessa, you're so beautiful. The perfect mix of sophistication and cuteness, with amazing bangs. And truffle is a darling. :)

I remember now that you have a similar problem - or used to, until you came up with your clever idea of taking in your existing lipsticks. So simple, yet I never seem to be that organised.

I think I need to trim Truffle's claws very soon indeed as they have just got so sharp that any contact, however slight or glancing, is now drawing blood. They are like little daggers. I may need to enlist some back up to carry out the procedure, mind!

What a lovely compliment! I have never thought of myself as sophisticated before. Have since been to the hairdressers and had a bit of a trim and my roots touched up. You can't see in these photos but I was starting to look a bit like a badger in places. Truffle has also lost some hair/fur this week when she had her spaying op, but it will grow back in no time, I am sure.

Hey there Vanessa,
I rarely use lipstick, only lip liner and eye shadow on my lips. The one I use has lasted me for nearly a decade and is deep plum, it cost about AUD$12 and when I want plum it's perfect.
How boring am I?
Portia xx

Simon Doonan in Eccentric Glamour recommended one lipstick color. Maybe you have not gone as far as that, but I can see you've found your pink and the dupe is nearly indistinguishable so good work you! All you need now is boxes of the stuff!

I would never call someone boring who uses plum eye shadow - least of all on their lips! I like your panache. ;) xx

Ooh, a signature lipstick, there's a concept I have yet to grapple with. I am not sure it's workable though, unless one were to wear only one palette of colours, outfit-wise.

Have you found 'the one'? And if so, what colour is it? I could *almost* go with Burberry Copper Lip Mist most of the time, if you had to push me, haha.

Truffle does have a cute nose, I'd say!

Oh, must look that up!