Loose Women: a tale of three perfumistas and a bottle of Penhaligon's Tralala 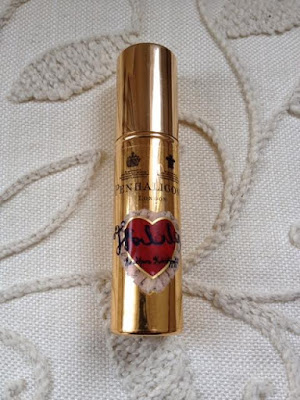 Ever since it came out, I always knew I was going to need a bit more than a purse spray size of Penhaligon's whisky-laced 'comfy jogging bottoms' scent (copyright @Tara of A Bottled Rose), Tralala, which I reviewed around the time of its launch. Not least because I quickly drained said spray and had to make do with sniffing the vestiges around the nozzle. So when 'suddenly last summer' Tara herself kindly offered to buy a bottle of Penhaligon's Tralala and split it three ways with Asali of The Sounds of Scent and me, I jumped at the chance. Nick Gilbert was still working there at the time, and Tara liaised with him to make her purchase, before decanting 25ml bottles for the two of us.

But in July, before my share was despatched, I happened to be at a northern gig of...you've guessed it!...The Monochrome Set. Over a curry beforehand, one of the band piped up: "So what perfumes are you into at the moment?", whilst being fully aware that whatever answer I gave was most unlikely to ring any bells with them. So it proved, only my answer was unintentionally even more baffling than they bargained for.

"Ah, well I am looking forward to getting a split of Tralala."

The table promptly erupted into merriment, and I was asked to explain this impenetrable comment forthwith, which I did.

"That would make a good lyric for a song actually", observed the singer,"either that or whatever it was you said back there about Uttoxeter."

This was a reference to an earlier remark I had made about being quite happy to pay my way at the restaurant, having expressly been to a cash point on the way up...although this actually came out as:

"It's fine, I got wedged up in Uttoxeter." Which of course I also had to clarify. 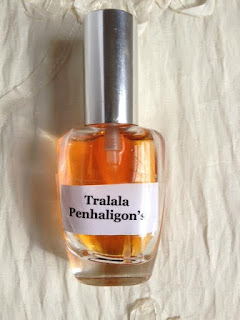 Fast forward, and my split of Tralala duly came, courtesy of Tara. Now I could spritz with impunity and abandon. Fast forward some more and The Monochrome Set's 13th studio album, Cosmonaut, is poised for release on September 9th. And one of the tracks - called 'Stick Your Hand Up If You're Louche!' - whose arcane and oddball lyrics are a talking point amongst the critics who have reviewed the CD already, contains the line:

"Do you daub your body with a split of Tralala?"

To be fair that is about the only lyric that makes any sense to me - it's a very odd song indeed, which probably would not reward further attempts at deconstruction. But I feel chuffed to have contributed even in such a very minor way to its overall opacity and "stylishly warpedness". And I could not have done it without the good offices of Tara and Asali...'it takes two to tango' as the saying goes, and a minimum of two to three to split. ;) So thanks, both!

You can listen to an extract from the track here - it is the second song down and fourth line in! 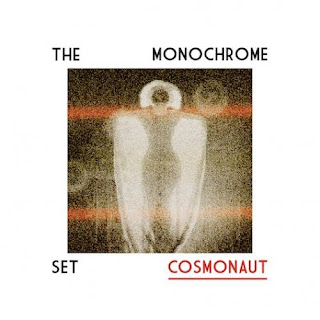 And here is a review from Mojo, and one from Louder than War, both singling out 'Stick Your Hand Up If You're Louche!' for special mention. This one from Uncut even lobbies for 'Louche' to be released as a single, with its own video.

"If Tapete don't issue a 7" of Louche with a supporting video and live dates, there's no justice in this cruel world."

Obviously, I can recommend the album unreservedly. ;) Val CQ Sperrer is also a fan of the band, forsooth, should you require further endorsement.

(Oh, the Uttoxeter quote ended up on the cutting room floor due to insurmountable rhyming issues.)

Haha - something very similar! I love that film, my favourite quote being: 'Don't worry, we can walk to the kerb from here.' All my passengers say that when I am driving / attempting to park.

How very cool to have your perfume habits portrayed in a song :-) tralala is such a fun and lovely perfume, and I always think of Tara and you when wearing it. Win win I say

Why, thank you for making it all possible... ;) Apart from the splitting and the 'daubing' - I think we might perhaps say 'dabbing'? - I am not sure we'd any of us wish to be referenced in the song beyond that. From the word go there is talk of something unspeakable involving an errant ginger hair. The whole song is troubling without being remotely comprehensible, if you know what I mean.

oh, that's a *glorious* way to be included in a song. (And so looking forward to the new album.)


In an entirely different musical sphere, I have recently been revisiting Carter the Unstoppable Sex Machine, and opining that no one, but no one writes such complex lyrics any more (outside some hip-hop, anyway, and here's a remarkably interesting link about that: http://poly-graph.co/vocabulary.html if you are a data and word nerd like me, anyway. I would have included The Jazz Butcher, but they are sadly under-known. So clearly I'm wrong. It's not no one but no one. There are a fair few, and I'm just a big gloom donkey that doesn't pay attention. And making little sense, because I have had a ridiculous panic writing day on my thesis.) So I'm going to go away, and sniff something soothing and pretty, and stop cluttering up your blog for now...

Oh how cool re: the song, Vanessa!
I have never tried that scent - next time I am at the department store in Cleveland that carries Penhaligon's I'll have to check it out.
xox

The track sounds fab, V. I can imagine that getting the crowd dancing when played live. What a brilliant and unexpected outcome of the split.
It's too bad about the rhyming issues because "wedged up in Uttoxeter" would have fitted the louche theme perfectly :)

You have educated me about Carter the Unstoppable Sex Machine there, and what an interesting link. I bet TMS would rank very high on any such word count chart, what with 'vestigial tail' and 'buttered fusilli' on this album, to name just two phrases that caught my ear.

I am friends on FB with Pat Fish of The Jazz Butcher, though I have never met him. He supported TMS in Japan and I also know a bassist who has worked with him called Tim Harries. Small world!

Hope you sorted your thesis crisis. Having a few domestic ones here if it is any comfort.

Ooh yes, do give Tralala a whirl if you come across it. It has a very distinctive opening and a less distinctive drydown, but I am very partial to it, I must say.

It is a toe tapper all right, in fact quite a few of the tracks are. Nice for Tralala to make the lyrical cut for posterity, beyond the time it is discontinued, as I think I heard might be happening to it?

And yes, the 'wedged up' comment does sound a bit louche now you mention it, though it was purely a monetary observation at the time!

That is a wonderful perfume story! Thank you for sharing, it makes me want to try Tralala as well :)

It's an amazing story! Many-many years later fans will be trying to figure out what that line mean... With the perfume (and soon the brand that inspired it) gone, and "split" not being a commonly used word, I doubt they'll succeed - unless somebody finds this post in depths of Internet archives ;)

Thanks! I hope you manage to catch up with Tralala sometime. ;)

Haha, I do think that line is pretty impenetrable, and as you say is only likely to become even more obscure over time. I might try googling 'split of Tralala' in a few months or years and seeing what if anything comes up... ;)