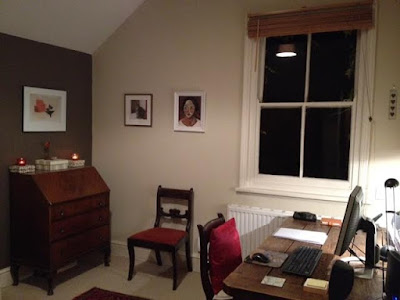 Well, I seem to have got into a bit of a routine of blogging on a Sunday, and had every intention of doing so yesterday, when the day took a completely unexpected turn...I have been troubled by my glasses for about a year now: one of the arms fell off and the optician replaced it with some random arm from another pair they happened to have lying around at the back of the shop. (To give you an idea of how random, my glasses are a sort of toffee colour, while the arm was two-tone black and lime green. I was still most grateful to have any kind of 'prosthetic', and amazingly no one called me out for this flagrant mismatch of colour schemes in a single pair of specs.)

Now the arm was never tight to start with, and progressively worked itself looser and looser, and in doing so dragged the overall fit of the spectacles sideways and down my nose, making for an unfortunate skew-whiff look and less than optimum vision. Compounding this, I am 'under the doctor' at the moment, and applying a special cream for the eye area, which has a tendency to sting and make your eyes water. To top things off, I realised that the bright light shining through the window directly behind my computer may have been causing additional eye strain, because for some weeks now I have been reading the screen with one hand permanently glued to my forehead to shade my eyes from the glare. Which is no way to carry on!

So just as I was sitting down to start a blog post on a proper subject, I had a rush of blood to the head and decided to turn my desk round, so that I was only receiving lateral light at least. 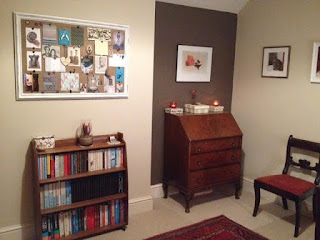 Some five hours later, which saw the relocation of the camp bed some readers may remember(!), much untangling and reconfiguring of cables, the removal of dead flies from those tricky interstices you find at the intersection of carpet and skirting board, a bit of touching up with paint of scuff marks on the wall, a spot of hoovering and rug dragging, and a good deal of weeding of box files and folders of old papers, this is how the room looked! The nerve centre of Bonkers HQ - now facing the wall rather than the window.


And for anyone who wasn't reading back in 2012, here is how my office looked like shortly after moving in. 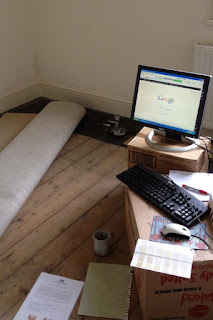 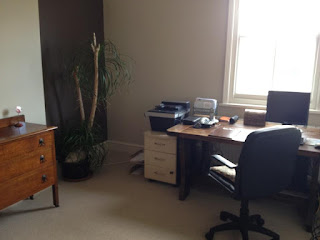 I do feel that the way I have it arranged now is more conducive to working or writing of any kind, and this morning I have at last sent off my broken glasses to a repair company, who promise to turn the job round in a matter of days, compared with several weeks from the labs used by the optician. (Who would of course much rather you bought new ones!)

So for now I am making do with an even older broken pair from about six years ago, which my friend Gillie kindly bodge fixed by sticking a bit of tape over the bridge where the specs had sheared into two. Weirdly, my prescription may be going backwards now, as I can see a lot better with these than when I tried them a year ago. So I should certainly be able to manage for a few days.

All being well, normal service (or whatever passes for 'normal' on here) will resume shortly!

Your office looks good. That is a very elegant wardrobe.

Good job on the office reorganisation and how nice to have "before" photos so you can see how much you've achieved.

Are you going to get your prescription checked as that would cut down on the eye strain if it's changed?

Agree with Lindaloo that that is a very elegant filing cabinet :)

How come you break your glasses so often? I think I managed that only once in all those years, and I'm pretty clumsy.

Here's the solitary solid recommendation that I can give for Sugru - it worked for repairing Sprog's specs frames, when the frame sprang away from its lens for reasons best known only to itself. I fixed it, smoothing and moulding the stuff carefully whilst wearing disposable gloves and avoiding getting any gunk on the lenses, and was pleased with myself. It is the only thing that the flippin' stuff worked on for me but I can, hand on heart, recommend it for Specs Repairs!
I'm wondering why your optician replaced the arm: wasn't it possible to put the original arm back and secure it with a new screw? (I've done this job myself, with an emergency replacement screw set and teeny-tiny oh-so-cute screwdriver.)
cheerio, and well done on your office rearrangements:-)
Anna in Edinburgh

If I ever need a guest writer, you are so hired!!!

That wardrobe was a £60 bargain on eBay, though I had to pay the same again to transport it here, and it needed a bit of TLC after that. But still an absolute bargain compared with anything you could buy in a department store. I have become a born again fan of all things vintage since moving to this house, which I never was before.

My eyes are changing all the time, sadly, but my glasses cost quite a few hundred a pop due to needing ultra thin lenses and this and that, so unfortunately I have to make them last until I can bear them no longer! Since 2012 when I got this latest pair I have already had one replacement / upgraded lens, at some suitably eye watering cost, haha.

Glad you like the filing cabinet - I tidied it inside too - everything was just chucked in there before...!

Just dumb luck really. In 2012 I broke the black and white pair while up some steps mending a wardrobe door - I fell backwards and landed on the glasses which I had put at some remove in a 'safe place'. ;) The latest pair I would not say I broke at all - the arm just fell off of its own accord.

What interesting stuff this Sugru sounds like - must investigate that.

Apparently the way the arm is designed there was no way of reattaching it easily - some part must have been missing that they didn't keep in the lab, I don't know, but they swore black and blue - indeed several opticians did, as I touted my specs round a few in the town! - that the only option would have been to send them away for a longer time than this company claim to do the job in.

Oh, absolutely eye-watering cost for high prescription lenses that don't look like Coke bottles. My vision used to worsen about every two years, and sadly those lenses were about $600/pair. The only time I ever broke a pair was when I was feeling flush and bought two pairs. Stepped on the pair not on my face. Fortunately repairable. And then with the other pair, the arm broke around the screw and could not be repaired.
Cataracts were the best thing that ever happened to me -- they implant prescription lenses so now can get by with drugstore readers. Not perfect because of some remaining astigmatism but oh so freeing.

I'm available only for titles. :D

The great thing about lots of vintage furniture (at least pre-70s) is that it's made of real wood as opposed to particle board.

Hey Vanessa,
I am pretty rough on glasses and they break or fall most often while I'm getting my face on for work because they go on & off half a dozen times and my fingers are all gooey. Then I also lose a couple of pairs a year into the bargain.
Your room looks very nice. So much space!
I find I can only work at a computer if it's facing the door. That also means I can put most of the mess behind me in cupboard and on shelves.
Portia xx

That is so true about the real wood thing. Fortuitously I have done a number of market research studies on particle board, and know what that stuff is made of, and it doesn't compare.

It's good to meet another shortsighted person. I am so myopic now that I get my eye tests free on the NHS(!), though sadly not my glasses, and I would have to shell out a similar amount as you for a new pair. That's a shame that the arm on your other specs couldn't be repaired. Mine are due back soon, and the company have apparently welded a new screw fitting on to the broken side. The whole thing is costing £50, including £20 secure postage there and back, which I thought wise, given their value!

I can see so much better for reading with these old ones I have been wearing this week, that it is a revelation. I think I may not need varifocals now as I thought, but rather may have found my new 'readers' in the back up pair I had all along.

I can imagine that your glasses would take quite a punishing in your line of work! I am surprised I haven't lost any as well as broken them. I am capable of losing most things at some point. Just found my hairbrush today after it was missing for a week!

Interesting about your preferred siting for your computer. I am not sure I would like to be facing the door myself, I don't know why. Maybe because it isn't a particularly attractive feature, and you can't look at the knick-knacks in the room. Well I can't with my desk in this position, but I can see pictures on the wall at least. xx

Lost your brush for a week? Were you doing the scarecrow look Vanessa.
No, I need to watch the door so people can't sneak up on me. This room is such a mess that there is only the wall that is peacefully uncluttered.
Portia xx

Haha, yes, but I managed with a handbag sized one. Bit dodgy for blowdrying, but still.

Do people tend to sneak up on you at home? ;)