Grand Theft Olfacto! The content scrapers are at it again... 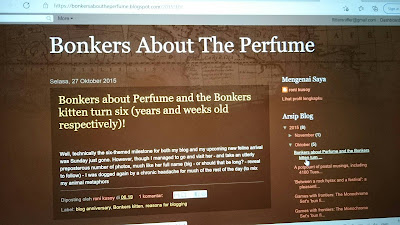 It has been a while (nine years!) since I noticed someone posting chunks of my blog posts on their own website. The last time it was an Israeli site, and I wrote about the incident here. Which is not to say that people haven't been quietly scraping my content since 2012, because I haven't actively been on the lookout for it. The other day though, I was idly googling Bonkers about Perfume in the same way as you sometimes get the urge to google your own name and see what comes up - what? you don't do that? - and it wasn't long till I lit upon a site called "Bonkers about the Perfume". Which is not even correct English, so I immediately smelt a rat.

I clicked on the site, which contained eight posts (in chronological order) from the autumn of 2015. Why those eight I will never know, but one of them was an account of how Val the Cookie Queen stepped up as emergency roadie and ferried the band around very close to her home in Austria, so I was a bit peeved about that one in particular being nicked. Also this account of visiting Liz Moores en route to another gig. The rest of the blog - labels, titles, headers etc - was in a foreign language. 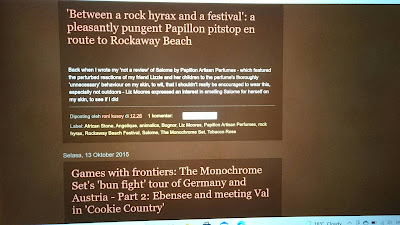 Next up, I clicked on the name of the blog "owner" - a Roni Kusoy - who I think is probably Indonesian, based on the number of Indonesian people of that name on Facebook, though admittedly no Ronis. And on his Blogger profile I spied a further four perfume blogs I recognised: "old-timers" like me, and even bigger sites, namely: 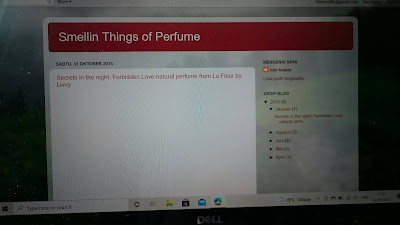 And blow me down if this Roni Kusoy bloke hadn't also taken precisely eight posts from the same period of 2015 from each of these blogs and posted them on his phoney sites. He has scraped another nine blogs beyond that, including several about cats. ;) At least he hasn't been able to copy the illustrations across, so there are daft-looking blank spaces everywhere. You can see the full list if you are curious, and click through to the perfume ones from there. I don't want to give the man too many clicks from my own site, as that feels like playing into his hands.

Now it is only eight posts per blog, whereas the Israeli thief had taken a lot more, but I felt sufficiently annoyed to leave a comment on Bonkers about the Perfume, asking him to take the site down, and adding that I was going to inform the other blog owners (well, the owners of the perfume blogs, certainly, with whom I have a connection).

I AM THE REAL OWNER OF BONKERS ABOUT PERFUME AND THIS IS A FAKE SITE, STEALING MY CONTENT. PLEASE DELETE THE EIGHT POSTS YOU HAVE COPIED! I SEE YOU HAVE DONE THE SAME THING WITH THREE OTHER PERFUME BLOGS AND WILL BE LETTING THEM KNOW!

[At the time of writing I hadn't yet clocked the fake version of + Q Perfume Blog...]

Well, some time has elapsed but the offending sites are still there, and Kusoy hasn't responded to, or even deleted, my comment! (Which I made a point of leaving on all eight posts.) This chap also has a YouTube channel - it is the only other search result in Google apart from his Blogger profile - with two videos uploaded onto it, and all of 11 subscribers. Assuming it is the same Roni Kusoy, and I can find no one else of that name.

It just remains to puzzle over why he would even want to pose as the owner of all these blogs? Is it a mischievous game to climb higher up the rankings than the legitimate sites in question? Is he simply trying to harness lots of clicks and awareness of his name by instantly creating new sites with content, albeit not his own? And am I right that he is Indonesian?

If you are a blogger, have you had your own content scraped, and were you able to resolve the issue? I would be grateful for any tips as to how to get the sites taken down, because asking politely - or even rudely! - doesn't seem to make much difference. And I know this act of brazen scrapery doesn't really matter in the grand scheme of things, and barely counts as a "Grand Theft", except on aggregate perhaps, but still...

I know having her content copied prompted Natalie of Another Perfume Blog to give it up completely.

To be honest,I'd rather not know if my content is being scraped.

Of course, I had forgotten what happened to Natalie - that was a bad business. I understand that it might be better not to know about the content thieves, and when I decided to Google my blog name, I never thought that is what I might find. I was more curious to see which perfume shops or sites came up ahead of me, despite not being remotely called "Bonkers about Perfume". Viktor & Rolf Bonbon was top of the search results. ;)

I had several of my photos used on different perfume-related or perfume selling sites. On a couple of occasions I was able to make then to remove my pictures, but usually my communications just go nowhere. Since my content isn't something that would produce too much traffic (I know because it doesn't for my own site ;) ), I just disregard it.

I think some of these sites are just trying to "create a presence" in search engines. They will use the site later for something.

I think that is probably the general way of things, that communications go nowhere. Like you, I don't have much traffic to worry about being siphoned off, though I'd imagine you have more than me as your blog is more interactive.

And I do agree that such sites are probably trying to create a presence: I was surprised to see some of Roni Kusoy's posts showing up on the second page of Google...

I don't know about content scraping but twice the APJ blog was hacked and sending people to some sale site. The second time it completely crashed the whole affair and Undina & friends came to the rescue and recreated the blog with most of its original content.
Portia xx

I did think about your awful do with APJ as I was writing this, which was a lot more serious and far reaching in your case. It is wonderful that the blog could be recreated - what a sick feeling you must have had thinking it had disappeared in a villainous puff of smoke. ;(