As regular readers know, I very rarely mark the occasion of my blog anniversary on the actual date. Days often go by before I remember, sometimes running into weeks, assuming I even do. On a whim I took a look just now at my very first post and read something else I had forgotten, namely that my intense and obsessive interest in perfume when I first fell down the rabbit hole was sparked by a phase of my thyroid being overactive, even though my diagnosis is of "underactive" thyroid. The thing is that if you accidentally overmedicate the condition, which is all too easy to do, it is like taking speed, hehe, and you can be prone to frenetic bursts of activity and bouts of insomnia. Coincidentally, I am coming out of such a phase again now - which has unfortunately contributed to my newly discovered osteoporosis, but there's no point crying over a surfeit of trabecular bone perforations. I did this by gradually lowering the dose of my medication (you do need to keep an eye on that, especially as you get older or add other drugs into the mix). However, even when I was at the peak of being in "manic mode" lately, I can report that this did not translate into a renewed compulsion to test every new perfume that moved. ;)

But I do still love the stuff, and am currently helping a friend to find a new signature scent, or better still, a perfume to start off her fragrance wardrobe, a concept I was keen to impress upon her as "the only true way". Moreover, yesterday I nearly met a perfumer in The Cotswolds, who is a friend of an old friend with whom I was spending the weekend, though it didn't work out in the end. This Person of Interest is involved in all sorts of fragrance-related projects, and is bound to know a lot of the usual suspects on the scene, so I would love to chew the cud with her one day.

In another surprise turn of events, I have been wearing Puredistance Rubikona for at least a week (review here). I initially re-tested it as a possible contender for my friend's new perfume (though the cost is admittedly a bit of a barrier!), but it ended up hitting the spot every single day when I was mulling over what to wear.

So yes, I am not "over" perfume yet by any means, and greatly value all the friends I have made through the hobby, both real life and virtual, but I don't have that irrepressible urge to try, try, try, and often in the old days buy, buy, buy. Which is probably just as well.

It also occurred to me that I probably don't deserve to celebrate a blog anniversary anymore, when I post about once a fortnight usually, and also had that long hiatus during my various health investigations. These haven't run out of steam either in fact, but the longer they drag on, the lower the chance of the doctors having overlooked something imminently fatal, one can but hope!

On that subject - not death, the other subject ;) - I would be curious to know if readers have a preference in terms of how often a blog owner posts? There are of course daily blogs, and several times a week blogs, and then the more "leisurely" (read "lazy"!) ones like mine. But I can only write when the spirit moves me, and will never ever have a schedule, even if that erratic rhythm sheds readers and SEO brownie points - as it very likely does.

I do have quite a few things in mind for the future, including - strange to report! - a couple of perfume reviews. I may not keep Bonkers up for ever though, as I would quite like to turn my hand in earnest to travel writing - maybe even a book featuring my many (mis!)adventures down the years on work trips, band tours and holidays. But we'll see...

So here it is, my 724th post, having batted off all the companies who would like to write guest articles here about everything from the Aquibear Countertop RO Water Purifier, to the Goodpapa K1 Multi-Function Spin Scrubber, the Elevoc Clear ANC + ENC Earphones, or the happily more snappily named MP Magic Boxer Brief, which prides itself on being:

"the first underwear with the unique seamless pouch on the current market. Totally seamless briefs for total comfort and once go seamless, never go back!"

Hmm, I bet you are wishing I had reviewed that last one...! And I wonder what perfume he wears? Looks like a Sauvage or a Bleu man to me, what do you reckon? 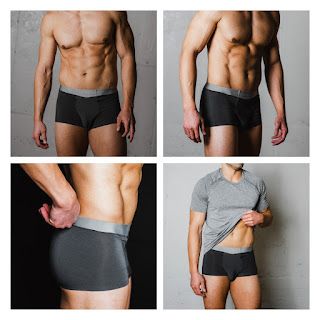 A lovely, thoughtful and entertaining blog as ever x

Aw, thank you Nicola! I have been very productive today thanks to the battery recharge from my visit. x

Sorry to be a day late when you posted on the actual anniversary for once! Happy 12th birthday to Bonkers.
Your blog is unique V and the more diverse the content the better.
Very pleased to hear you intend to put all your travel stories into book form at some point.
As another lazy blogger I say continue as you are.

It's me! Don't know what happened there.

Dear Vanessa!! Happy 12th! Honestly, I do not care how often you blog, just don't ever stop. I find it so intensely refreshing to read your stories, whether they are about perfume (which admittedly is why I started following), Truffles, your house in France, or even how to buy a sofa! I do not always comment, but I do read it all ;-)

Which reminds me that after your previous post (about the "Eucerin Eczema Relief Flare-Up Treatment" that you could not buy here) that i did some sleuthing and i was wondering if you looked at their atopic dermatitis range? https://www.eucerin.co.uk/products/atopic-dermatitis

As for the colloidal oatmeal part: how about Aveeno? they also have products for the eczemal (i declare this a word) skin: Daily Moisturizing Cream With Colloidal Oat & Ceramide

Anyway, here's to many more blogging years, with our without perfume related subjects, but for sure without an itchy skin!

Am happy to solve the mystery of the Unknown fellow lazy blogger! Though I am not sure I would call you that, as you have been more industrious than me lately. And under the circumstances I think it is entirely fitting for people to post comments slowly over a number of days, if they feel so minded. ;)

I definitely still have the writing urge - time will tell where it gets channelled...

Happy Anniversary dear Vanessa. I would love reading whatever you have written - I think you would make anything funny and interesting, even if it were a thesis on accountancy ..... But I could understand if eventually you might tire and want to turn to other matters.

Haha, thanks for your good wishes and encouragement and for the dermatological info. "Eczemal" is an excellent adjective which I shall be adopting forthwith. I don't have the atopic kind of eczema, but I gather it is the main one. Other readers may find that link helpful.

Yes, Aveeno is a good brand to mention and someone else suggested that. It is very similar to the Eucerin and to something the doctors prescribed for me once, and I have a hand cream of theirs in fact. I think the difference was the lack of anti-ageing ingredients and *maybe* also that they included Vitamin E in their formula, which I am supposed to steer clear of, but my memory is a bit shaky. Next time I am in Boots or Superdrug, I will take a closer look at their options.

Thank you for your kind comment - you have been a great supporter of the blog, and it is much appreciated. I did study accountancy at college in fact, and it was my weakest subject by far, so I don't suppose there will be a thesis on that subject in the offing any time soon, hehe.

As with so many things in life, I think it is a case of waiting to see how you feel as time goes on. With any major change of direction "a head of steam" has to accumulate, as it were, before you act, and I am not there yet.

Happy blogiversary! Wow, 12 years is a good stretch! I think you should post whenever you want, and I hope you keep the blog up, because I enjoy browsing around and I'm sure I'm not the only one. I hope you get to meet the mysterious Perfume Person of Interest, too!

Thanks for the feedback on posting frequency, and it is interesting to know you "browse around" - I never thought anyone might do that.

Yes, I hope to meet the mystery P P of I as well sometime. :)

Dear Vanessa
Happy Blogoversary! (I’m not really late - I was on the date on IG ;) ).

I think that at this point you’re not likely to attract too many new followers (somehow I doubt any of the older blogs could these days), and I doubt that you care much about this. And those who keep reading you love your style, your stories and just you. So, it doesn’t really matter how often you post or even on what topic - we’ll be coming to your slow publishing with our slow commenting.

Once again: congratulations on your 12 years of wonderful, witty, lighthearted and quirky posts!

Aw, thank you, Portia! I don't think I have ever been called a legend before. Thanks too for your postcard, which is still up in my kitchen.

Thank you for your multi-channel congratulations! Your blog has been going for close to that time too. I think you are right about not attracting new followers at this stage, and goodness knows there are many who were around at the start who have drifted away, some of them fellow bloggers. I love your bit about coming to my slow publishing with your slow commenting. ;)