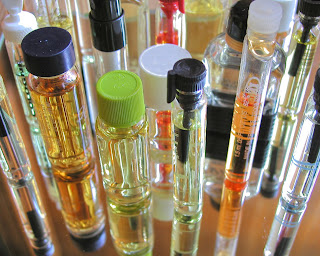 In February 2008 I was diagnosed as having a hyperactive thyroid, having previously suffered for two years from an underactive thyroid. I feel it is no coincidence that this diagnosis coincided with weeks of frenetic online perfume research, compulsive wrist sniffing, quizzing of friends as to their preferences, memorizing of fragrance classifications and general perfume-related mania. This all came totally out of the blue, for during most of my adult life I had been involved in serially monogamous relationships with just a handful of perfumes and hardly ever wore the stuff or paid much attention to how it smelt or what was in it. I am happy to be gripped by this new hobby, for I might never have fallen into this fascinating olfactory paradise (well, mostly it is a paradise...) were it not for an underlying ailment that gave me absurd reserves of energy and purpose!

So why start a blog some 18 months later? Well, the short answer is that my longsuffering, non-fragrance wearing partner has become heartily fed up with my talking to him about perfume all day long, as he hasn't the least interest in fragrance. He doesn't mind my having a hobby, even an obsessive one, but he doesn't want to know the minutiae of it. Which is fair enough, really. As things stand, he thinks the many hundreds of perfumes I have sampled in the past year and a half ALL smell of "craft shop", pretty much. By "craft shop" he means those shops that just sell "stuff" you don't need: sparkly clutch bags, vintage teddy bears, scented drawer liners, soap with bits in it, pot pourri and candles, that type of thing. So I decided I needed an outlet for my random musings on perfume as a matter of urgency.
Posted by Vanessa at 11:59

Excellent and I'm sure many of us are glad that you decided to embark on this wonderful endeavour. Now, as for the vintage teddy bears, who couldn't use more of those?

Haha - you may have a point about the vintage teddy bears! They are highly collectible these days...

You're a keen observer, and I'm keen on your commentary.

I am very happy your sharing your wisdom with us ;-) or shall I say... craziness :-* (I confess I had to check leo.org to see what bonkers means. It brought the expected result!)
Hope to read more about Chanel...

Hi Quarry and Andreea - thanks for looking in! It was simply time to channel my perfume witterings in a more family-friendly direction...

Love the family-friendly part. Off to enjoy milk and cookies, S

"Craft shop," especially with additional qualifiers, is probably more than I'm able to get from my vSO (with him it usually sounds like a guessing game: "Is it citrus?" (sniffing some oriental gourmand) or "Smells like spices" (for a in-your-face floral).

Lovely to have a comment from you on this very first post, even though we didn't know each other then!

I chuckled at the feedback on perfumes that you get from your vSO - sounds wonderfully 'green eggs and ham' to me. ;)