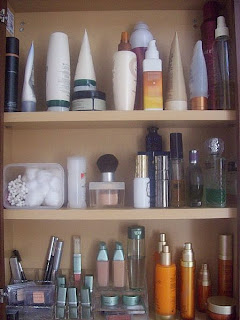 As a serious lover of perfume have you ever found yourself visiting the bathroom at a friend's house, and being confronted with the disturbing sight of perfume bottles lined up on the window sill, on top of the bathroom cabinet, in the bathroom cabinet (if you are looking for aspirin or are just plain nosey!) or - shock horror - lined up on the edge of the bath? For a committed 'fumehead this is a really distressing thing to encounter, for we know that heat, light and moisture are the enemies of fragrance and the bathroom can often be the confluence of all three.

I remember spotting a bottle of No 5 (and another designer scent I will not name so as to protect my friend's identity!) tucked behind the taps on the edge of the bath. My friend's husband had just had a shower, so I could barely make out the bottles in the clouds of steam. What does one do in such a situation? One's instinct should be like that of a social worker, namely to file a report and have the bottles taken into care - or at least put them on the "at risk" register and issue their owners with a verbal warning. But on that occasion, I kept my own counsel, and left those fragrances to take their chances in the life-threatening steamy jungle of their suburban habitat.

Mind you, I have only recently learnt to care for perfume. Before the onset of this perfume hobby in February 2008, I owned precisely one bottle of Estee Lauder Intuition, which had sat variously on my bathroom and bedroom window ledges since 2001, and had quietly turned rancid without my noticing it some years previously.

But since my failure to act on behalf of the endangered No 5 bottle and its bathmate, I have become a more conscientious vigilante when it comes to the environmental health of fragrance - wherever I see it...For example, I got a friend in Germany to throw out a bottle of Bvlgari Omnia which had gone off in her guest cloakroom, and suggested to my hairdresser that he should remove his colognes from the window ledge of the en suite and transfer them to a bedroom drawer. A friend in Sweden no longer keeps her perfumes in the bathroom cabinet as a direct result of my intervention. At Stansted airport earlier this year, I complained to the SA that the fixture on which a tester of B by Boucheron had been placed was far too warm and brightly lit to keep it in good nick.

So go on, next time you nip to the bathroom at someone else's house, keep your eyes out for vulnerable perfumes and do your bit for the perfume loving community!
Posted by Vanessa at 13:36

Did you notice the bottle of Oui de Lancome innocently exposed to the sun's rays beneath the skylight in my bathroom ceiling? Would you be surprised to hear that I hate that stuff and that it belongs to my other half?

I did notice that, and thought it a strange anomaly given that the bulk of the perfume family live by your bed. But as I don't like Oui either, and because it was your special day, I decided it would be churlish to mention it. The true facts of the matter confirm me in that decision!

PS Did you spot the bottle of Bal a Versailles in that cabinet in the picture? Now that is criminal...

I'm embarrassed to say this but.....most of my perfumes, either FBs or decants, are kept in the upstairs bathroom. Now in my defence, they are in cabinets, so in the dark, and the heat is rarely turned on in said BR so it's maintained quite cool, and the shower's almost never used there so less humidity. Until I can invest in some sort of cabinet away from toddler's hands, it'll have to do. Don't tell anyone ;-)

Your secret's safe with me! Carry on not washing and you may just get away with it... : - )

You may be pleased to hear, Bonkers, that I now have a chest of drawers, so scents are beautifully displayed on the surface of this. Seasonally arranged, of course, with all my summer bottles now safely stashed away. Still keep the perspex sample boxes stacked up next to my futon though -- for surreptitious early hours sniffing.

Delighted to learn that you have a chest of drawers now, but the preposition "on" in "on the surface" concerns me.... : - )