"How's it hanging?" The Rise Of The Perfume Pendant 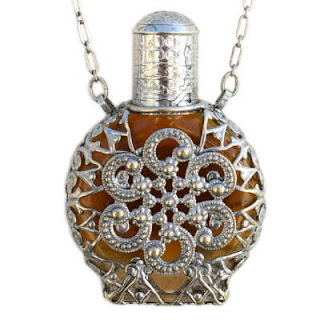 There has been a fair bit of publicity lately for Ajne's new range of perfume pendants, including one featuring their latest scent release, Vanille. Ajne being of course the Carmel-based niche perfume house famous for its all-natural fragrances and celebrity clientele. Well, reader, I bought it - in silver - because I already own a 0.5 oz bottle of Calypso, a sultry tropical floral launched last year and featuring notes of frangipani, jasmine, cardamom and vanilla. I have to say that Ajne are quite sketchy on their note information, and until recently I thought there was ylang-ylang in Calypso too. And maybe there is at that.

Going back to the perfume pendant, it has a 36" chain which makes it very low slung. Haight-Ashbury groin-level slung, though there again that is the fashion these days. I am inferring this from the length of the chain on my other pendant from Penhaligon's, which is also sporran-like in its latitude. So yes, I am a two perfume pendant household, though strictly speaking the Penhaligon's one is not quite comparable as it doesn't come pre-filled with perfume; you are meant to fill the ovoid shaped receptacle (opaque, but I shan't hold that against something fashioned out of sterling silver!) with whatever you fancy - it comes with a built-in dipper. I will of course never put any perfume inside because, Flittersniffer that I am, I wouldn't be able to commit to just one scent - whether a Penhaligon's or otherwise.

So, in summary, the Ajne pendant is a perfume bottle first and a piece of jewellery second, while the opposite is true of the Penhaligon's one. I have put the Ajne pendant round my neck but it doesn't come very naturally to "wear" a perfume bottle. To be perfectly honest I felt a bit like a St Bernard, even though it isn't remotely cask-like or bulky. Or an explorer with a water bottle slung round their neck - you know, the sort made of goat's bladder or dingo hide or whatever roadkill came to hand. So the Penhaligon's pendant I wear and the Ajne one I treat like a miniature perfume bottle, though you will catch me fiddling with its chain now and again - it is quite a sensuous feeling to just let its silvery links slip through your fingers... 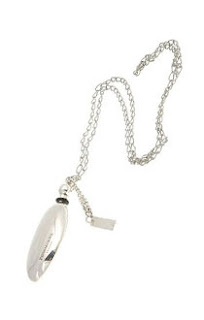 Which reminds me: the two are both silver, but the Penhaligon's pendant is very pale, shiny silver, while the Ajne bottle is a darker colour, more like a tin can to be frank, and not as silvery as in the illustration. This may well be to do with it being filigree work by "Bohemian jewelers practicing age-old metallurgy techniques that have been passed down for generations". I tend to this view not least because I have an empty Czech mini perfume bottle my brother bought me which has some silver filigree work in a similarly dark colour.

As for the new Vanille scent, I like it - it is exactly as described on the Ajne website: "Gourmand vanilla and toast".

It is deep and rich and has a burnt note, like the vanilla of Tom Ford's Tobacco Vanille but without the tobacco, or the vanilla in Guerlain's Spiritueuse Double Vanille, but without the spirits and not double, thankfully. After sampling the Ajne, L'Artisan's Vanilia will forever come off as a synthetic vanilla flavoured chewy sweet by comparison. This is the SL Musc Koublai Khan of Vanilla scents, I think it is fair to say, and I mean that in a good way. The company reommends layering it with other scents, but I only own Calypso and a couple of samples that may have evaporated by now, and Calypso is probably vanilla-y enough...

I would LOVE to own Printemps and Fleur Blanche, money being no object (these are all insanely expensive), and I wouldn't be surprised if a smidge of Vanille added a lovely rich oomph to those pretty florals.

I also read on the Ajne site:

"Did you know scientific research indicates that the sultry scent of vanilla increases the element of attraction by over 10 times? Well then, you may be intrigued to learn that the soul of Vanille is deep, luscious vanilla from Madagascar..."

They have also asked that people send in their Valentine's experiences while wearing this scent. Expurgated versions, I presume. But of course they haven't reckoned with the intractable Mr Bonkers, who actually refused to sniff this, fearing the intensity of its essential oils.

The last thing to mention perhaps is the celebrity aspect to Ajne fragrances: 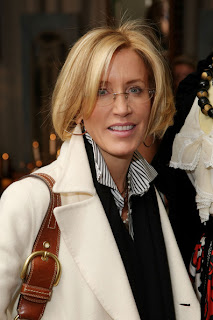 I happen to know that a number of actors in Mad Men are Ajne customers, though I can't recall which, and I doubt any of them will have copped for Vanille. Felicity Huffmann wears Printemps I believe, and as a huge Desperate Housewives fan I would be lying if I didn't admit that the thought of sharing a scent with a celebrity of her calibre is disconcertingly appealing. A sort of fragrant stalking, if you will. Which is harmless enough, I suppose, if pricey. But anyway, I don't happen to own Printemps - I just aspire to being scent twins with Felicity. And the flipside of all this celebrity endorsement malarkey is that Paris Hilton apparently likes Vanille, but I am trying to rise above this titbit of news. Even Britney is allegedly partial to the brand, which I don't even wish to think about.
Posted by Vanessa at 16:11

Vanilla. When I read "The Tin Drum" and Oskar mentions that a young girl he is interested in smelled like vanilla, I started to wear the scent (early 80s I believe).

Loooooove jewelery, especially noisy types (bangles, etc) and love the look of a long chain and nice-sized pendant. It does take some getting used to. Example, no quick movements as you might injure your zyphoid process :-)

Onto Ajne, insanely expensive but am happy to own my little bottle of Printemps (waving to Felicity!)although I can't say I wear it often. I feel like it's one of those 'sacred' blends appropriate for expensive occasions. Silly me! I should take advantage before the the best before date since they are 'organic' perfumes.

Lovely reading as always, thank you!

Didn't Daisy come in a pendant version? Or perhaps it was a ring. I love the idea, but it would never work in reality for me. I get cross enough when I can't get the coffee smell out of a thermos, let alone trying to introduce a new scent into a little silver thingie. They are pretty though.

I am another Desperate Housewives lover. I bought a Spoylt silk velvet robe when I was about 8months pregnant. It is gorgeously impractical (dry clean only, no pockets) and cost more than my Brora winter coat, but I love it so much and enjoy a quiet moment of idle glamour every time I wear it. The brand is well used in Desperate Housewives.

I think these are pretty, but... I dunno... I think I'd be afraid that I'd meet with an accident and spill perfume all over. That would be baaaaad.

I have to confess that the only TV I really watch is Food Network. My children love Discovery, the HIstory Channel, and Animal Planet, and The CEO is of course addicted to ESPN. I don't think I've watched a series since ER went silly back in, oh, 2002.

Bloody Frida, I have never read "The Tin Drum", though it is one of those books I feel I should have done. As it features vanilla-loving characters, this should only strengthen my resolve to do so.

Lovethescents, your medical knowledge is a great asset to this blog. Who would have thought that the zyphoid or xiphoid process was actually a body part!! I like bangles and bracelets too, though Mr Bonkers think that I look trashy in some of them. Chance would be a fine thing!

Hebe, I don't know about the Daisy ring or pendant, but given all the iterations of cap colour (currently on blue, I believe), I absolutely wouldn't put it past them!

Oh gosh, getting smells out of thermoses. That is one of their major drawbacks. I only drink tea, but I also find that it doesn't taste too great out of a thermos, as well as leaving an indelible odour. There is a product that could do with a serious rethink.

I have not heard of Spoylt, but if your robe cost more than your Brora coat I am not surprised you feel cosy and spoylt in it! I have a Brora vest top and a bobbly scarf but I cannot afford a garment of theirs that clothes the whole body. Clearly because I blew my funds on Ajnes. : - )

Hey Muse, I know what you mean about the accident risk aspect. And for anyone half way serious about perfume curation, you would of course never wear a pendant and then walk around outside in bright light, let alone warm sunshine or Florida-style humidity... Why, that would be to commit the al fresco equivalent of the bathroom storage scent crime. : - )

"Musc Koublai Khan of vanilla scents"-- wow!! Now I have a scent idea fixed in my head-- must try to see if they line up!

I love the look, but not the idea of swinging that much bling. If I owned it, I'd probably leave it out so I could look at it everyday, but never wear it.

This is where I should say that the coat was half-price on sale. Brora full price I find quite scary.

Well done you for catching a Brora sale... My finest hour was the Boden clearance sale in Telford last December - everything reduced to £10, even £80-£120 frocks. I bought four.

LCN, I am not sure I am cut out to be a bling-swinger either.

And for the record, I am not even a frock wearer particularly...!