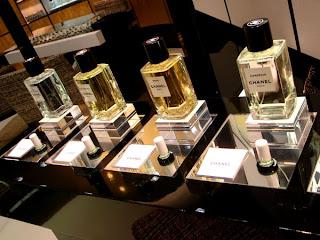 Given my posting hiatus last week, it occurred to me that Bonkers is in danger of grinding to a complete halt if I neither manage to blog while I am away nor when I am at home in between my trips. So I thought I would have a go at writing at least one post this week - which is less hectic overall than the next fortnight in terms of the number of interviews, if not the amount of driving involved!

Three days (and three countries) in, I am struck by the fact that an extraordinary number of things seem to have gone right, contrary to the norm. For starters, Birmingham airport’s duty free shop has mushroomed beyond recognition since my last visit, and the fragrance section is well on its way to rivalling Harrods’ perfume hall. Okay, I may be exaggerating slightly, but...get this...the Chanel counter now carries Les Exclusifs – the only UK airport to do so, apparently. I clapped eyes for the first time on the new, more humane 75ml bottles. These were at “better than high street” prices, according to the sales assistant, by which I presume she means the prices in the Chanel boutiques, as you won’t find Les Exclusifs on any high street near me. There’s a clue in the name, in fact. Now as it happens I am not in the market for even the 75ml size of my favourites from this range, but for anyone who is, and who might be passing through Birmingham airport, that could be good to know. 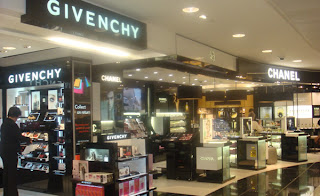 I was pleasantly surprised to see a couple of Miller Harrises in the “New” fixture: Figue Amère and Fleur Oriental. Yes I know, those scents have been around for a while, but they will surely be new as far as the airport is concerned! I spotted my lemming du jour, Elie Saab, and then my eye lit on the new Prada Candy. What between the sweetie shop name and the rather twee packaging, which reminded me of that gimmicky range from Benefit with the silly girls’ names, I very nearly walked on by. However, it just so happened that I had seen Candy listed on a split site recently, so I figured it must have something about it, and so it proved.

I have since caught up with Robin’s review of Prada Candy on Now Smell This: she liked it more than she expected to, and her description chimes with my fuzzier reading of the scent. I found it sweet, but not too sweet – a gourmand woody oriental with a hefty dollop of benzoin apparently, though it isn’t all that obvious to my nose. 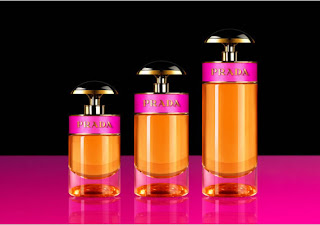 My initial impression is of a scent in similar vein to Kenzo Amour Indian Holi (which is a sweetish, powdery, peppery floral with darker undertones from the woods and incense in the base). However, the vanilla is more pronounced in Prada Candy, and segues into a caramel accord in the drydown. Yes, cross Indian Holi with Ava Luxe Love’s True Bluish Light in a two thirds one third ratio and you might get something in the right ball park. Or there again maybe not(!), but I would sum this up as an edible yet edgy scent…

Although my nose kept nuzzling the spot where I had sprayed Candy, I also tried Narciso Rodriguez for Her In Color on skin for the second time: 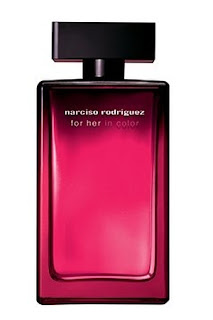 It struck me once again as a deeper version of pink NR for her, NR for her given a sort of Stella spin if you will, as in the original Stella McCartney. Still powdery and super musky, but with a pronounced rosy-amber thing going on. Does the world need yet another Narciso flanker any more than it does another Stella flanker, most of them just a slightly nuanced variation on their predecessor, in a different coloured bottle, or the same coloured bottle with squiggly flowers climbing up it? I think not.

I also tried Lalique Encre Noir on skin because it is such an out and out cult classic, but sadly, it just smelt of ink on me, and rightly or wrongly I couldn’t get images of squid out of my mind.

Then I had a snifter of Guerlain Jasminora (straight up, knock ‘em dead jasmine), and Bouquet Numéro 2 (a watery and rather indeterminate floral scent I couldn’t quite put my finger on, which turns out to have only litchi, rose and iris in it. What's with the "litchi"? I take it that is a more botanically correct word for "lychee"...)

So I have set myself the challenge of acquiring a sample of Prada Candy by hook or by crook on this trip. I failed dismally to secure another Elie Saab sample this morning (the cheek of me for even trying, given my existing stockpile!), but that story belongs in the next perfume "bit"...


Photo of Chanel Les Exclusifs range from thedollonfashion.blogspot.com, photo of Guerlain and Chanel counters from moodiereport.com, photo of Prada Candy from gizmodiva.com, photo of Narciso For Her In Color from fragrantica.com

How generous of you to post while on one of your working tours. When I read your last post my first thought about your upcoming schedule was that old rom-com title "If It's Tuesday This Must Be Belgium", and now you're three days and three countries in.
Good luck on your Elie Saab sample seeking.

I was a little surprised to read Octavian giving Prada 'Candy' a favorable write-up on 1000fragrances today. I haven't smelled it yet-the name was putting me off. It helps that you liked it too.

I've also been wanting to try 'Jasminora'. "a straight up, knock 'em dead jasmine" sounds good to me!

It is generous of you to say that *I* am being generous to post while I am away. The next month or so will be pretty full-on in terms of overseas travel, so I thought I should try to pull my finger out really, or Bonkers will end up being on permanent hiatus. : - ) I am put to shame by bloggers who post on the move perfectly well - on holiday, even!

Do go ahead and try Candy - if you already know and care for Indian Holi I would be fairly confident you will like it.

Jasminora is like a diluted version of Montale Full - to my nose it is still quite potent, but not the full indolic monty, say!

Happy trails, Vanessa, in all senses.

I wish I had known about the Birmingham Airport before you came. :)

I hope we can find a Prada Candy sample for you, but don't hold your breath, I have not seen it here yet. :(

Thanks very much for flagging up Candy V. I must admit I skipped Robin's review based on the name alone. I did assume it was pink fluff not a "woody gourmand oriental" as I have now read. I'll try it when I get the chance, hope you get your sample.

That's a result re Birmingham Airport! I'm put out that I'm flying out of Gatwick in a couple of weeks time instead of Heathrow because of the inferior perfume selection. If they do happen to have any Elie Saab samples I'll be sure to pick one up for you!

Hope you are managing to dodge the festival goers! I know that Sibling Bonkers tends to keep his head down at this time.

Sorry you were having problems posting a comment but that has worked now. : - )

You may not have found me a Prada Candy sample, but you more than made up for it in the fantastic swag bag you gave me!

Thoroughly enjoyed our sniffathon just now - to be documented in due course... : - )

Do not pass up a chance to check out Candy - I think the name is a real misnomer. Or rather it is a caramel-esque scent right enough, but the name lacks gravitas!

Sorry your own airport duty free perfume options will not be "up to snuff". Re Elie Saab, that is a very kind offer to keep your eye out for samples for me, hard on the heels of the Zeta RAOK, but as it happens Olfactoria has seen me right on that front. Of which more anon!

I thoroughly enjoyed it as well!
I can't wait for the Vienna post, it'll be even more fun to read than usual. ;)
I look forward to trying the misnamed Candy as well.

Vanessa, any chance your remember that "better than high street" price for Exclusifs?

I'm still not sure if I want to try Candy. What if I like it? I would hate answering the question... ;)

I hope I haven't oversold Candy, which I have only tried once, after all, but I am quietly confident you will like it. You are fine with gourmand woody orientals, so it is just whether the sweetness level is acceptable.

Go on, bite the bullet and try Candy! How bad can it be to want it?

Every time I logged into this site it seemed to be "down". I've missed so much! Okay, so I just sampled Candy and love it. Completely agree with your assessment! I hope you get a split too :-)

Yay! Yet another fan.

Aha, thanks for the heads up about the downsizing - the Les Exclusifs just got less exclusif! Maybe Birmingham was briefly the first airport to carry the new bottles, or maybe I was just given duff gen!