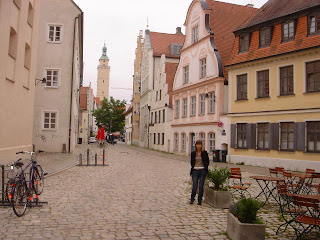 In my last post I made reference to my German friend Claudia, singling her out for special mention as the lone purveyor of authentic croissants in an ocean of stodgy Teutonic travesties. During my recent trip I spent a very enjoyable weekend at her house in a village near Ingolstadt (best known as the world HQ of Audi cars). Claudia takes the phrase “hostess with the mostest” to a whole new level, indeed the entire family rallied round to make me feel welcome.

For instance, her elder daughter vacated her bedroom for me, where I was greeted by the sight of not one, but four packets of Haribo Gummibears on my pillow. On the bedside table stood miniature bottles of red and sparkling wine, plus one of mineral water (presumably to pre-empt hangovers). 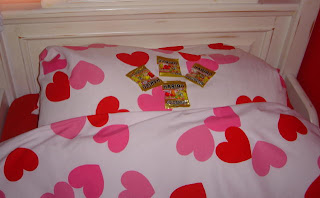 Meanwhile, my friend’s younger daughter had baked some chocolate cupcakes, the icing on which was still wet and glistening as I arrived, while Claudia’s husband put at my disposal a full suite of travel management and business centre services, including questionnaire and map printing. Not forgetting his impressively nimble valet parking of my hire car!

Additionally, it seemed that the whole family had been squirrelling away perfume samples from shops in anticipation of my visit. Claudia presented me with a Douglas bag full of carded samples, including one of that elusive new love of mine, Elie Saab Le Parfum - to which more would be added presently... : - ) There was also a sample of Kenzo Flower Essentielle, which was not previously on my radar, and which warrants a review of its own in due course. So all in all I was very touched at the thoughtfulness and high level of coordination that had gone into the preparations for my stay. 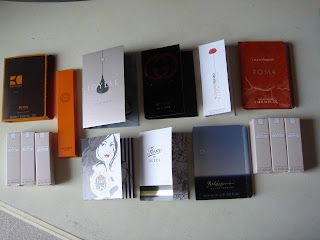 Claudia’s tremendous hospitality also extended beyond the home: on Sunday she took me on a walking tour of Ingolstadt, the highlights of which were the gothic cathedral, the city walls punctuated by turrety gatehouses, and the ghoulishly fascinating museum of medical history, featuring such oddball exhibits (quite literally) as a collection of glass eyes.

And on the Saturday we hit the perfume shops in both the centre of Ingolstadt and an out of town shopping mall. We covered two branches of the “drugstore plus” Müller (more of a cross between a drugstore and a low end department store), and one of the perfumery chain Douglas. My sampling was particularly haphazard on this occasion for some reason – I did test a number of the Korres perfume line, which you don’t often see - well, not in Britain anyway. Korres packs pretty much the entire formulation of its perfumes into their decidedly unsnappy titles: I think the ones I tried were Paeonia Vanilla Amber Pear, Vanilla Freesia Lychee, and White Tea Bergamot Freesia. I remember all three as pleasant but unremarkable. 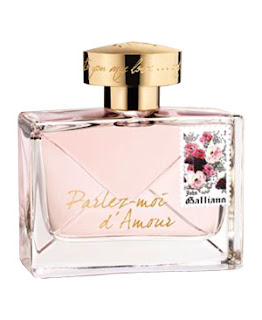 Then some bizarre impulse made me reach for testers of scents in a fixture clearly aimed at a younger audience: first I tried Katy Perry Purr (unexpectedly grapefruity! – could that have been the “forbidden apple” listed in the notes, “forbidden” perhaps precisely because it is in fact a grapefruit?). Next up was John Galliano Parlez-Moi d’Amour. In the case of the latter, my eye was drawn to the cute bottle, that looks like an airmail letter with a stamp on it (the wrong side, by the looks of that picture!). It turned out to be a sweetish floral woody musk scent – not bad, and crucially, not grapefruity. I also sampled Tommy Hilfiger Loud for Women, as featured in the recent BBC documentary, “Perfume”. It was another rose patch-lite number - a bit watery, but a decent option for that demographic, which also holds true for the Galliano. 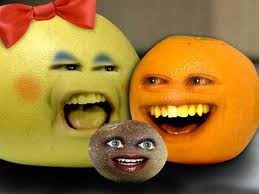 Prompted by a review over on Boisdejasmin, I also gave Ange ou Démon Le Secret a go (another phantom grapefruit composition – I am guessing that here my brain could be misreading the tea and cranberry notes?). Now you are going to say that I have really got a downer on grapefruit – whether real or a figment of my nasal reception - but I would just like to say that I am not the only one. For Claudia’s younger daughter made the mistake of spraying herself liberally in DKNY Woman before I could intercept her and explain that that is the citrus fruit equivalent of a nuclear holocaust. She ruefully agreed with me after the event, whereupon I judged it an appropriate moment to explain the concept of the “scrubber”. If anyone reading this happens to know a snappy German term for this, I would be glad to know it! 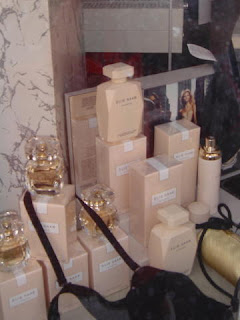 The highlight of the whole expedition was without question the continued garnering of Elie Saab Le Parfum samples. Elie Saab is not yet in mainstream distribution over here, but there was a huge publicity splash about it in Germany. Now you will recall that Claudia had already scored one sample for me in advance of my visit, then I managed to acquire another in the first branch of Müller we visited. In the second branch of Muller I thought I would try to pull the same stunt and the sales assistant pulled out three samples from her drawer! She was apparently new, bless her. The cynical and parsimonious rot will doubtless set in presently!

Then I dived behind the Clarins fixture for a moment while Claudia went up to this generous SA who bestowed a sample on her too – just the one, as she perhaps had been insufficiently effusive compared to me. Anyway, Claudia promptly passed this latest sample on to me, like a shoplifter stealing to order. Well, I must say I felt a little guilty to have ended up with six of the things. I would consider buying a bottle at some point, but not at German retail prices, oh dear me, no. 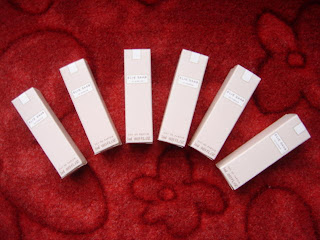 To show my gratitude to the cosmos, I doused myself in Elie Saab for several days straight, and can add a few more thoughts to my initial impressions here. The opening was as bright and radiant as I remembered – it is like a whoosh of Jo Malone orange blossom mixed in with a rosy, smooth skin scent. I am also reminded of various facets of Love Chloe, Stella Nude and Dior 1947 New Look, in particular the latter – there is a definite cold cream-and-slinky-satin-teddy vibe going on here. And there is also….now, please don’t be alarmed by this…a very slight synthetic quality, at the beginning at least. I was so pleased to read that Angela of Now Smell This also gets this radiant quality – to be honest I wouldn’t have had Elie Saab down as her thing! 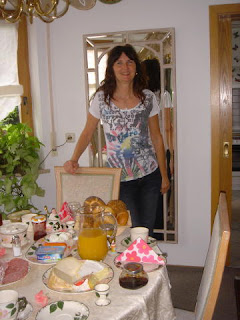 So all in all Operation Elie Saab went like military clockwork to coin a phrase, as did Operation Breakfast on the family’s part on Sunday morning. When I finally ambled downstairs at gone 11am, I was blown away by the elaborate and varied breakfast buffet that awaited me. As I say, I was torn between the cupcakes and the croissants. It was option anxiety, or as they say over there, with a nice touch of assonance: “Die Qual der Wahl”.

Much like the world of perfume, indeed…. Though if I had to wear Elie Saab Le Parfum for a month straight, it wouldn't be a huge hardship… : - ) 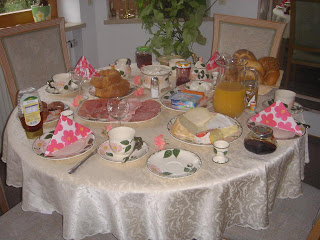 Photo of John Galliano perfume from fragrantica.com, still photo of "Grapefruit's revenge" from hark.com, other photos my own.
Posted by Vanessa at 15:07

Wow, Claudia and her family put five star hotels to shame with that level of personal service. How lovely. Well done on the Elie Saab samples, it's great to get back home and admire your spoils! As for Korres perfumes, it's a wonder anyone manages to remember the names of them.

P.S. Please don't post that grapefruit's revenge pic again, it was so unsettling I couldn't drag my eyes away from it :)

Claudia and family set the hospitality bar very high, it's true! And I do agree that the Korres scents are a bit of a mouthful. My favourite remains the one that goes something like Jasmine Gaiac Wood Passion Fruit - and I think Pepper is in there too!

Sorry for the scary grapefruit image - I must say it does nothing to endear me to the note...

And where can we make reservations to stay at Chez Claudia? ;)

Seriously, though, it sounds like a lovely visit, and I'm glad you had the chance to acquire some samples of Elie Saab. After a few days in your beloved country, I am already refamiliarizing myself with techniques for getting samples out of parsimonious SAs.

You were in our beloved country?!! And may still be? Hope you are having a good time and that your shopping excursions are not being unduly inconvenienced by our riotous youth.

How wonderful and exciting! Claudia and her family are incredibly thoughtful and kind. You're so lucky!

I'm dying to try Elie Saab. A friend is sending me a sample. Can't wait :-)

You forgot to mention a very important detail: what washing supplies were there at your friends' lovely house?! :)
Congratulations on scoring those samples! I'm familiar with the routine (hitting multiple counters, working with a friend, etc.)

Can't wait to hear your feedback on Elie Saab! I am quietly confident you will like it...

Haha, am pleased to hear I am not the only one to deploy such cunning tactics to score samples!

I can confirm that Claudia's bathroom offered a wide array of cleansing agents. I don't recall any specifics, but I know that I was very satisfied with the selection on offer. And I can also report that from reading previous blog entries of mine, Claudia was fully up to speed with my tea and egg requirements.

Ha ha. Yes, I am still here. Riotous youth have been no problem, in fact no youth problems at all, unless I count the girls who wanted to have a long chat about my accent.

Haha! I guess that is an occupational hazard of being so far from home - my British accent has been known to attract comments (usually favourable : - ) ) when I visit the US.

Enjoy the rest of your visit!

Vanessa, you say it's for your job, but with such hospitable friends as Claudia (and Bloody Frida and others), I know the real reason you're always on the road! (I further conclude this based on what you've let on about the food service at Chez Bonkers...not that I'm judging you or Mr. Bonkers, please know. If I had friends like Claudia and Bloody Frida preparing bed-and-breakfast style buffets for me, I'd be hitting the road too - and hard!)

Anyway, I loved hearing about your most recent trip -- and, as usual, laughed very hard, especially when I read your line about DKNY Woman ("Claudia’s younger daughter made the mistake of spraying herself liberally in DKNY Woman before I could intercept her and explain that that is the citrus fruit equivalent of a nuclear holocaust.")

Haha, I think you may very well be onto something there, for the cupboard at Bonkers Towers is often bare, even when I am in residence!

And ah yes, the scrambled eggs chez Frida were legendary. I highly recommend a trip to Ohio, which is more do-able for you, I would have thought... : - )