You wouldn't guess it from my accent, but I was born and bred in Belfast and lived there for 23 years. Until recently I used to describe this as "half my life", but the maths don't quite stack up any more... Then, shortly after I left for England, my friend R moved to Belfast from Scotland and is still there today. She works at a contemporary art gallery housed in a former linen mill: rather aptly, it is called The Golden Thread, and specialises in community outreach activities. So anyway, R and I like to think that we are serving out an entire lifetime in Belfast in relays - hold on a minute...2011 - 1985? (I think she arrived in the mid-80s) = more than 23 years, meaning that it is probably time for me to take over on the next shift...

And if I lived in Belfast right now I would be able to attend this intriguing olfactory event / exhibition / interactive experiment - for it seems to be taking multiple forms. My friend tipped me the wink, knowing of my scented proclivities, though unfortunately I shan't be able to get across to check it out. 'Howser's Law' runs until 27th August at the PS2 art gallery in Donegall Street (full details at the bottom of this post).

Howser’s Law : “The primary personality trait of a given subject is directly determined by their reaction to a smell”.

Here is some background, reproduced from Jan Uprichard's blog: 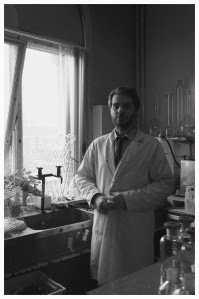 'This project makes a re-presentation of the scientific research undertaken in the West coast of Ireland by a group of pioneering scientists lead by Dr. Douglas Howser in the mid-1960s in the field of Olfaction. They discovered a formula which allowed them to determine the predominant personality traits of individuals by their reaction to a certain smell. However, their work has never been fully recognized nationally or internationally due to the economic constraints and political agenda of the Irish government at that time. This lack of awareness on the international stage meant that through the passage of time the work of Dr. Howser and his team has been forgotten by history. In addition to this, much of the documentation of the group's work was lost to a fire in the storage warehouse of the Natural History Museum in the outskirts of Dublin in 1985. In an attempt to redress this balance what is left of their work is being exhibited here along with the chance to take part in the experiment that proves Howser’s Law.'

Now, this is not the first scent-related project Jan Uprichard has conducted, as noted on the PS2 gallery's website:

'In 2010 she invited people in her "Smell Association Denominator" project to contribute to an archive of smell associations. In practical tests, participants had to mix the smell of home, a clean smell and the smell of Belfast.'

Uprichard had the bright idea - literally, as it was a vivid shade of blue - of using a converted container as a drop-in centre for her experiment. The progress of the project is documented on another of her blogs, Smell Reminiscence & Inquiry Lab. 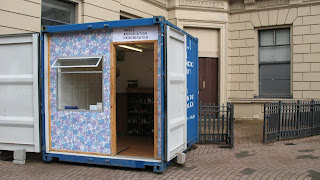 If any Northern Ireland-based fumeheads manage to see and/or participate in(!) 'Howser's Law', do please report back! And meanwhile, I shall puzzle over what my reactions to various smells might have revealed about my dominant personality trait. I am noted for my liking of understated, borderline wimpy scents, so does that make me a shrinking violet? Or a conflict avoider, maybe? Or someone who doesn't wish to draw attention to themselves with their fashion and fragrance choices, at least? Without being able to attend and contribute first hand to the experiment, I can only speculate!

I'm friends with Jan and shared the same studio as her when were on our Masters courses at the art college. The Howser's Law exhibition is really obscure and olfactorily interactive. I'm planning myself to get the blog post up next week myself ssci think her work is really revealing for the participants involved.

Thanks for dropping by and what a great coincidence! I believe I do "know" you under your own name - as in seeing your comments on various blogs... : - ) I will look out for your report on the event and add a link. So sorry not to be able to attend myself, but am in the midst of a spate of work trips.

Hello Vanessa. Just thought I'd drop you the head's up about my post on Jan's exhibition. You can read it here http://personalodour.wordpress.com/2011/08/16/howsers-law/ if you do have the chance to get down, it's very enlightening.

Thanks very much for this link. I shall definitely miss the event, sadly, as I am away for the next two weeks with work. Have you posted anything on Basenotes about it, by the way? I know of one Belfast-based member called Donna, but there may well be more locals who would appreciate the tip off!