Bonkers Is Off Again...! 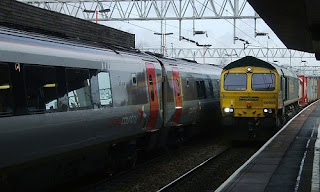 Just a quick word before I shoot off on the next work trip to Germany and Switzerland. I would firstly like to thank my 90th follower for rounding the total up to a nice number, and presumably squaring up the edges of the avatar mosaic. I intend to hold a prize draw (cash in on those bingo searches, why not?!) if and when I hit 100.

I am going to be away almost the whole time between now and Christmas, with short and fairly frantic pitstops at home between trips, so posting will doubtless become "spotty" (I believe this is the correct technical term). Or even spottier than of late, say, for the last two weeks have been largely taken up with appointment-making and travel plans. For anyone who follows me on Facebook I will probably manage to maintain some kind of tenuous stream of drivel over there, though the jury is out as to whether that is a good thing.

While I am away, Mr Bonkers has been instructed to keep a watchful eye on the plants and on Charlie Bonkers, whose incipient incontinence issues gave me cause for concern this weekend, spectacularly derailing my progress through the "to do" list.

Which reminds me - what shall I do with the three parsnips in the fridge?


Photo of Stafford station from flickr.com
Posted by Vanessa at 10:03

Wishing my favorite Bonkers blogger a safe and profitable trip - preferably without too many mishaps? - and hopefully, Charlie Bonkers will calm down a little, too! Do be safe!

Those parnips are good boiled and puréed with a little cream and curry powder...;-) Roasted with live oil and thyme, used as a foundation for chicken soup, sautéed and caramelized as we do here in DK...lots of things to do with parsnips!

But not too much to do with the boredom while you're away!

Happy trails. :)
Say Gruezi to Switzerland for me.

Thanks for that nice send off! I reckon you did mean "olive oil", as "live" oil wouldn't take too kindly to being roasted... : - )

Those sound like tasty ways to jazz up parsnips - I also like to do them in the oven in maple syrup and sesame seeds. However, I realised there were three of the things in the fridge just as I was about to set off. The taxi driver had them in the end, and seemed quite pleased.

Travel safely and come back with more stories and pictures.

Thanks - and I will do my best on all counts!