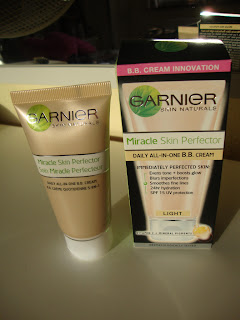 In a comment on my previous post, Katie Puckrik teased me about the ambitious scope of my two hour speed romp through Zurich's finest perfume outlets:

"Judging from the amount of perfumes covered in this post, you have fully lived up to your Flittersniffer moniker. I'm wondering if your Miller Harris ennui had something to do with the fact that you'd already given the best of your love to the 79 fragrances previously sniffed."

I realise that my sniffathon in swish Swiss shops was the perfume equivalent of a supermarket trolley dash, but that is the thing about living in the sticks, as I do most of the time: when you are lucky to find yourself in one of Europe's scent meccas, you want to pack as much in as possible. But between the afternoon in Zurich, the session in Parfumerie Hyazinth in Basel, and the cafe grab-fest that preceded it, I guess I am feeling a bit sniffed out now, while readers' heads may also be spinning. And so I decided to take a break from perfume and write a palate-cleansing post about a beauty product instead. 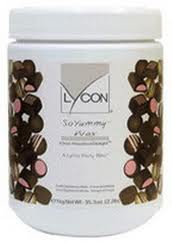 This is also a cynical move on my part to boost my flagging Wikio Beauty Blog ranking, given that I managed to acquire this mysterious categorisation in the first place. And ideally, I guess I should be taking a chocolate-based beauty product as my subject matter, the better to bolster my emerging Klout reputation for chocolate-themed writing. Quite by chance, I did once feature such a product following my initiation into eyebrow waxing, but you can't pull a stunt like that off every day.

So in the meantime I would like to sing the praises of a new all-purpose beauty product that is getting rave reviews in the media, and of which I received three complimentary samples at the time of its launch: Garnier Miracle Skin Perfector Daily All-In-One B.B Blemish Balm Cream. The name of this cream is a bit of a mouthful to put it mildly, but then this is a multi-tasking product with a lot of benefits to convey!

In a nutshell, Garnier B.B Cream (as I will call it for short) is a light foundation and moisturiser combined that hydrates the skin, evens out blemishes (thanks to its mineral pigments), and gives reasonable yet sheer coverage. It has SPF 15 sun protection and is ideal for people like me who dislike the faff of a multi-stage beauty routine.

Here's the official blurb on this product:

"B.B. creams (short for Blemish Balm) are hybrid products which combine the benefits of skincare and make-up in one. 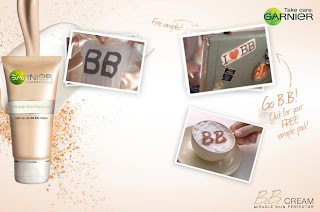 Initially developed by a German dermatologist in the 1950s to soothe skin and provide coverage, B.B. Creams were made famous in South Korea by an actress famed for her beautiful skin."

Now as a rosacea sufferer, I have been loyal lately to the very wonderful (leaving aside the matter of the missing "u") Revlon Colorstay 04 foundation in Sand Beige, which is just a foundation, but covers redness brilliantly and stays put - and stays matte - all day long and all night, should your lifestyle happen to be a tad more exciting than mine.

Given my usual levels of spot outbreaks and ruddy complexion, I wouldn't have touched this product with a bargepole, for I can no more entertain a product offering merely "sheer coverage" than I could wear a diaphanous blouse without a camisole underneath. As it happens though, the launch of Garnier B.B Cream coincided with my skin being in a very good phase (for me). And so, sold on the convenience of a foundation and moisturiser combined, I did not hesitate to apply for my trial pack of three samples, and tested Garnier B.B Cream every day for about a week. I applied it all over my face instead of just to my nose and chin, as I do with the Revlon foundation to avoid too heavy and mask-like a look. 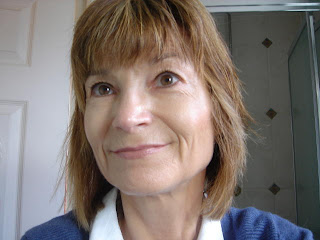 Well, the first thing to say about the Garnier product is that a little of this goes a very long way, and I got about three days' coverage out of a single sachet. I can only imagine that some users have Very Large Heads and/or a worse distribution of blemishes than even me on a really bad day.

The second thing to say is that Garnier B.B Cream goes on beautifully smoothly and does indeed "melt into the skin" as the sales bumf claims.

"Feel the sensation of the light texture that instantly melts into your skin."

It genuinely is a lovely feeling, doubtless due to the moisturising component of the formulation.

You can build up a bit of coverage in key areas, and Garnier B.B Cream does even out skin tone up to a point, but I don't suppose it would conceal my bad outbreaks of spots or redness - it would be hard to top Revlon Colorstay on that score. 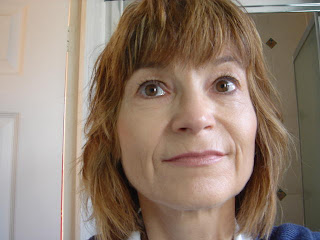 And yes, my skin does feel very soft to the touch with the blemish balm on - "luminous" might be stretching a point, indeed it looks a little greasy if anything, at least initially - but the sensation on the skin once the cream has been on for a while is luxuriantly smooth. So my oily skin does present a bit of a challenge, but I patted powder on top and that takes away most of the greasy aspect. That is the only negative point I can think of really, and for anyone with dry skin Garnier B.B Cream could be just what it is crying out for.

So whilst I wouldn't wear this product on a bad skin day, on a good skin day it is a jolly useful all-in-one product. Like those lipsticks known as YLBB ("your lips but better"), this tinted moisturiser or hydrating foundation or whatever you want to call it in the end is YSBB ("your skin but better"). I shall certainly be buying a tube when I have used up my samples.

Just to clarify, in all three photos this is Garnier B.B. cream immediately after I put it on and before applying foundation (ie when at its most shiny!) 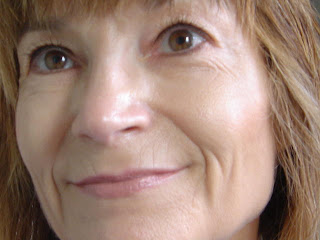 And hold on a minute - I just applied some Garnier B.B Cream to the back of my hand to watch the seamless blending in action again, and something prompted me to sniff it. I can report that the blemish balm does in fact smell (very faintly) of something, which I hadn't really noticed before: a vaguely lemongrassy, spa product-type fragrance. A less herbal, more lemony Clarins Eau Ressourcante maybe - something in that ballpark anyway. Now I see that Clarins Eau Ressourcante includes notes of sarsparillia, robinia and longan, and am frankly none the wiser.


Photo of B.B cream from Superdrug blog and Garnier campaign, photo of Lycon wax from Ebay, other photos my own
Posted by Vanessa at 18:19

Funnily enough I am also a recent convert to this BB cream, using it instead of a daily moisturiser, to give me a bit of coverage as well. (I decided I was looking a bit rough around the edges and wanted to look better for work.)

Like you, I found it good. A slight improvement that feels comfortable, rather than proper coverage from foundation, which always looks cakey on me and feels odd.

I wouldn't be able to use it in the summer, because it would be too greasy for me, but for winter, with the SPF15, I've got to say, it does everything I want from a daily moisturiser with the added 'your skin but better' element, as you said. I think this will be a favourite product this winter, as my skin dries out in the heating and weather.

And I adore the scent. I'm sure someone here will pin it down for us. But I think you're close with the Clarins Eau Resourcante. Want to wear that now...

I hope and pray to the perfume gods that my skin will look anywhere as good as yours! My hives/eczema means that I don't get to wear foundation, but should they ever clear up (perfume gods willing), I will keep Garnier in mind.

Pleased to meet a fellow convert - and as you know, you and Katie P are my "go-to lipstick gurus" - I owe a couple of excellent purchases to your suggestions along YLBB lines.

Yes, Garnier BB is light and slight - and a bit greasy - so high summer might be pushing even the mattifying properties of powder beyond their limits.

The subtle scent is a pleasant bonus, and I would be curious to know what exactly it is meant to smell of. It's a very therapeutic fragrance, certainly.

Commiserations on the hive and eczema front - that's a bummer, though I would never have known from the pictures I have seen of you.

On reflection, this post may be a celebration as much as anything of the fact that for the first time in 37 years (since I was the age you feel you currently look ie 15!) I don't have at least half a dozen red bumps on my chin. I guess I wanted to capture the moment, as it may not last if the drugs stop working (as they are wont to do after a while). But for now, while the going is good, Garnier does the business!

Thanks so much for letting me know about this, V, it sounds perfect for me. I was worried it wasn't because of the word "blemish" which is normally associated with oily rather than (my)dry skin, but not so! I can't stand wearing foundation and usually wear mineral ones but they are quite a faff. I will definitely be giving this a go, especially as your skin looks so good and we have a similar skin tone.

BTW enjoyed your use of "bumf".

I think this would work great - better, indeed - with dry skin, and would feel very soothing and silky. I don't know much about mineral makeup myself, except that it did sound a bit complicated!

My skin is definitely yellow toned - is that the word? Not blue at any rate. It is all rather confusing. I can't wear red lipstick, I do know that.

I am also paying more attention to the smell of this cream, now I have noticed it, and it is extremely nice in itself.