David Beckham: A Premier Division Perfumer Right Under Our Noses! 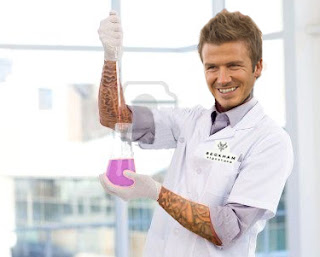 A friend has just sent me a link to a remarkable scoop on the UK online satirical news site, Newsbiscuit, dubbed Britain's answer to The Onion by the Laugh Lines Blog of The New York Times. In this article, international soccer superstar and sometime underwear model David Beckham talks about the intensive training he has put in over the years to become a top nose...to go with his killer right foot, "impeccable pecs" and Goldenballs.

I am kicking myself that I managed to miss this before...

And he even mentions civet!

"Speaking to industry journal Heaven Scent, the tabloid favourite exclusively revealed: ‘People think it’s easy...they don’t realise the backbreaking hours of work you have to put in to get this good. The years I spent elbow-deep in civet, coming home stinking of musk and lavender, awash with essential oils. Those were tough days for a young man.’"

Here is a link to the full article. Having now learnt of Beckham's years of dedication to his fragrant craft, I shall certainly upgrade my view of the for Him stable of Intimately Beckham Men, Intimately Beckham Night Men, Instinct, Instinct after Dark, Instinct Ice, Instinct Intense, Pure Instinct, Basic Instinct (I may have made that one up), and a couple of others that boldly broke with the tradition of having names that consistently include the words "Instinct" or "Intimately", typically in a nocturnal setting.

Speaking of instincts...on a whim I looked up my diary entry for the day David Beckham was born: May 2nd, 1975.

The bits I can make out are as follows: 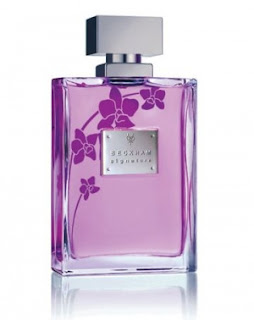 Should "coal" in fact read "goal"? Could it possibly be a strangely garbled prediction of England's 5-1 win over Germany in 2001, a side captained by David Beckham? And does the reference to my autograph book herald the fact that one day Victoria Beckham, former Spice Girl, fashion designer, mum-of-four and wife of Goldenballs, would launch her own perfume range, including the tellingly named Signature for Her? And might the unfortunate incident involving my mother and a boiling can of sweetened condensed milk presage a future flanker from our husband and wife duo featuring a caramel note?

About as likely as the next Beckham baby being called John, I'd say...


Photo of David Beckham from newsbiscuit.com, photo of Signature for Her from fragrantica.com
Posted by Vanessa at 18:40

Good to see him so supportive of his wife's talent too ;)

Have you ever smelled any of those perfumes? I'm not sure I was aware of their existance before reading this post.

I think I may once have smelt one of Victoria's early scents in passing, but it didn't make much of an impression. To be honest I have mostly given the whole line a wide berth, though perhaps I should keep a more open mind about it.

The Beckham range is certainly in wide distribution in the UK, and also routinely pitches up in our T K Maxx, which has tended to reinforce my preconceptions about the brand not being of stellar quality...

Now I know who must make my custom perfume! Forget Ellena, Duchaufour, Aftel - it is Beckham I want!

I know - how could Beckham possibly have been under our radar all this time? And he is easily as easy on the eye as that By Kilian chappy...

LOL! I don't know which excerpt I love more, the one from Beckham or the one from your diary. Your entry is like a cryptic code and could well be Nostradamus style prophercy!

I have no desire to try any of the "Instinctively Intimates" though.

Glad you enjoyed the diary entry - those were the relatively more coherent bits. You may also be amused by these snippets from the day Olfactoria was born, shortly after David Beckham:

Thanks very much for Olfactoria's entry which is equally intriguing and random. Is it a coincidence that there's a German word in there? I think not.

My entry is great! Tara is totally right by suggesting the prophetic power of your diary. Kulturkampf, indeed. :)

By Jove, you may be on to something there - I didn't think of that!

I just had to look up Kulturkampf, because as you can appreciate, my O-Level history syllabus is something of a distant memory.

What tickles me is the thought that I might actually have been speaking German (schoolgirl-style, but still) for a full four years before you uttered a word of your native tongue! Though you had a good excuse for at least three of them... ; - ) ; - )

Part of me really likes David Beckham, he always comes across as genuine and 'nice'. The fact that he seems to put effort into his perfume is reassuring, even if he does seem to bathe in your favourite note 'civet' :P

I must say I have always thought of DB as nice too, and Mr Bonkers once met him and Victoria and Brooklyn in a "queuing in a canteen scenario", and said they were really nice and approachable.

The bathing in civet thing was concerning, I agree, even though he does have pecs that would be a brass rubber's dream.

He's a bit of a national treasure, really...