A Trio of Bonkers Trips: No 1 (Germany & Switzerland) – Doorstepping myBeautyBlog in Lüneburg 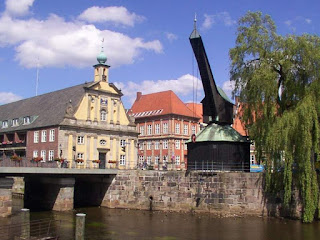 In everyone’s circle of friends, there is supposedly at least one person you could ring up in the middle of the night if you had to, say if you were having a personal crisis of some kind. I believe I have at least a couple of friends like that, but I trust I will never be in such dire straits as to feel the need to take them up on their kind offer. If I were them, I wouldn’t particularly relish being roused at bleary o’clock to lend a listening ear or some more practical form of help.

And then there are the friends you can disturb during the day – by just turning up unannounced, pretty much – and know (or be confident at least) that they will be pleased to see you at virtually no notice.

MyBeautyBlog is such a friend. She is both perfumista and make up blogger, The Non-Blonde of the German-speaking world, if you will - or “DACH-Gebiet”, as it is known in business circles (the acronym DACH being composed of the country abbreviations for Germany, Austria and Switzerland respectively). There may well be others, but I have only come across one other perfume blogger writing in her native German, namely Lena Brombacher of Olfactorialist – well, in both English and German in fact, for there are two versions of her blog. For of course the other well known blogger from that neck of the woods, Olfactoria of Olfactorias Travels, has opted to write in English, giving her blog international reach far beyond her home turf of Central Europe. 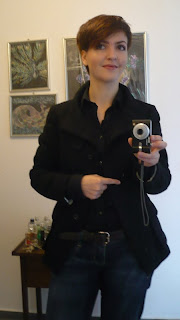 But for perfume lovers in the DACH-Gebiet who prefer to interact in their mother tongue, myBeautyBlog (real name Andreea) fills an important role, and her proudly advert-free blog is still going strong after six years. Andreea is in her early thirties but looks as young as Ari of Scents of Self actually is, though she doesn’t look her age either…! : - )

MyBeautyBlog and I “met” on Now Smell This, the mother ship of blogs where a number of my early fumehead friendships were forged. We first met in person in spring 2009 on a blind sniffing date in Hamburg, and then again in April of this year. We took a sightseeing tour of Andreea's home town of Lüneburg and enjoyed a memorable al fresco meal by the river in the company of her fiancé and his best man-to-be. And then in August it was thanks to a timely text exchange with Andreea that I discovered the Königsparfümerie in Dresden.

And so to the latest bonkers trip… After my first appointment near Hamburg at the start of my itinerary, I called Andreea on my mobile and asked her to guess where I was. “Er, round the corner?” she replied, sussing my game immediately. “Nearly – I am about 16km away. I know it is cheeky to call you out of the blue like this, but would you have time for a cup of tea?” 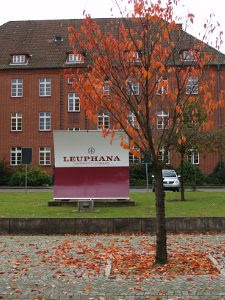 And so it was that some 40 minutes later, myBeautyBlog met me outside the university where she works. After a quick peep in her office, we adjourned to the canteen for that much needed cup of tea (on my side), and had a good old catch up on news, notably how the plans were going for her imminent winter wedding (now just over a week away!) To preempt reader inquiries the groom is predicted to wear Guerlain Cologne No 68, and the bride is hoping to be surprised with a wedding scent gift on the day. Well, I use the word “surprised” advisedly – I think the groom has been given some fairly heavy – and named – hints, including Parfum d'Empire Eau Suave and Kelly Calèche Extrait if my memory serves me.

At some point obviously we needed to sniff one another’s scent of the day: Andreea had applied hers to the nape of her neck, which made for some comical and ostentatious craning on my part, but if they did happen to notice, no one in the canteen appeared to be remotely fazed by this strange friendship ritual. I correctly guessed that Andreea was wearing a cunning mélange of Jardin sur le Nil and Jardin sur le Toit, while my own SOTD of Dior New Look 1947 had her foxed, but that was fair enough given that she had never smelt it. 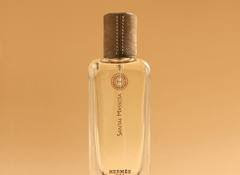 After a pleasant hour or so of shooting the breeze, we said goodbye back at my car, but not before I had extracted my vial of Hermès Santal Massoia for Andreea (a big Hermès fan, as you may have gathered) to try right there on the spot, for those 4ml tubes do not lend themselves to being shared. We stood in the dark and cold for a couple of minutes as Andreea huffed her wrists – she liked what she smelt, but in no time at all the scent seemed to disappear, a phenomenon which she lamented as happening to her more and more often lately.

And I thought how curious we might appear to anyone passing by, two women standing by an open car boot, barely acquaintances really - from different countries and different generations - both intently sniffing the same pair of wrists, united by our passionate shared interest.

And then it was my turn to disappear, off to my next port of call…

Have a wonderful wedding next week, myBeautyBlog! And if and when you have a moment, do let us know what you wore on the day!


UPDATE: MyBeautyBlog's wedding report is now up on her blog here. It is in German, admittedly, but even for non-German speakers it is well worth checking out this and an earlier post for the lovely photos of Andreea's dress, makeup and bouquet.

Photo of Lüneburg from bach-cantatas.com, photo of myBeautyBlog from her website, photo of Leuphana university from ffb.uni-leuneburg.de, photo of Hermès Santal Massoia from stylelist.com
Posted by Vanessa at 12:50

I really think it's beyond lovely how perfumistas from all over the world love meeting each other and sharing their perfume love. :)

All the best to myBeautyblog for her wedding!

It is indeed, and I find it really boosts my morale on these solo work trips to meet a friendly fumehead along the way!

What a lovely outing! It sounds like you both had a great time :-)

I hope MyBeautyBlog gets exactly what she wants/needs for her wedding scent.

Hey, did she happen to suggest any makeup items for you? :-)

I am sure myBeautyBlog will be a "smell-o-vision" of loveliness whatever scent she wears on the big day.

We didn't speak about cosmetics very much when we met, although there have been some interesting posts lately on myBeautyBlog about wedding make up. Also, I joined other readers in choosing one of two pairs of glasses the bride was thinking of wearing!

Scroll down for the two pics...

Well, I may have overstated my nasal prowess - I did the identification *in stages*, getting Jardin sur Le Nil correct straight off the bat, whereupon Andreea prompted me and said: "And there's another one...", so that's when I came up with Jardin sur le Toit. The Le Nil was dominant though - maybe it had been sprayed last!

Very charming and very, very lovely: both your MyBeautyBlog friend and your account of your spontaneous perfume meet-up. Here's wishing Andreea a wonderful wedding day, and here's wishing you safe and happy returns. You're traveling from now almost to Christmas, yes?

Thanks for your kind comments. Just thought that this time next week Andreea will be married (give or take a quarter of an hour... : - ) ).

I am briefly home for a couple of (headless chickenish) days, off again at the weekend for three days, home for one and then away for another week. Not sure how Christmas is going to get done at Bonkers Towers!

LOL! Goodness knows my nose is not normally on the mark like that... : - )

It's so great that you manage to fit in these perfumista meet-ups during your work trips. I'm sure it's some light relief. I can imagine it must be a funny sight for on-lookers though! Must try perfume on the nape of my neck one day.

Many congratulations on your forthcoming wedding Andreea!

Yes, light relief is the word all right!

D'you know, I have never worn perfume on the nape of my neck before, but I believe that is one of ChickenFreak's favourite spots for scent. I like to be able to smell the stuff myself, you see, and depending on any prevailing wind, I imagine that might be problematic in a "rear body part" scenario!

Oh what a lovely description! I was only a bit surprised, and luckily I can be very flexible with my job.
Thank you for your visit once again!

So the wedding is going to be soon, on Friday, thank you very much for your wishes!

So Mr Mybeautyblog thought of giving me the long coveted Hermés Collection with the small bottles, but I refused (or let us say: I can wait for this some longer...) and unfortunately, the Extrait is going to be discontinued.

So by now I am going to wear Kelly Caleche EdT, the only scent a man "dared" to choose for me himself. I know it took him about a week sniffing in my favourite perfumery until he made his choice.
The reward is that I am ging to marry him :-)

I just drenched my dress in the EdT (funny enough just half an hour ago!) and I will spray some Kelly Caleche EdP also (this was given to me by my best friend) so - a mix and match with a lot of background.

We are going to travel somewhere (i do not know where yet, a surprise!) and I will take for sure another Ellena with me... 24Faubourg Eau Delicate or One of the Jardins. They feel like holiday for me.

So thank you once again and visit my blog ;-) for some pics of my dress, made by my friend, cakes - made by another friend and a really fancy makeup :-)

Thanks for dropping by and letting us know how the SOTWD (Scent Of The Wedding Day!) plans are shaping up. Sounds like Mr MyBeautyBlog has come up trumps with Kelly Caleche, and your layering plan will ensure that you will smell lovely all day long...

Can't wait to see the photos over on your blog and meanwhile have a wonderful day! I hope the weather is kind to you, though the forecast for Austria, where I am at the minute, is not too clever.