A Trio Of Bonkers Trips: No 2 (Belgium & France) - A "Drowned And Out In Paris" Sniffathon: IUNX Parfums Revisited

I have been back at work for three days, and am keenly aware that this is the season of "Best Fragrances Of 2011" retrospectives, while I am still have a backlog of (mostly scent-related) posts to write up from my recent work trips. I have enjoyed reading about other bloggers' top perfumes from this year, and have spotted a number of personal favourites amongst them. My own "Top Sniffs And Nasty Niffs" round up will be along shortly, however a chronological imperative(!) compels me to finish my travel posts first, starting with the final instalment of the Paris sniffathon, when I popped into the IUNX shop at the very end of the afternoon.

This was my second visit to the IUNX boutique, which is located next door to Hotel Costes at 239, rue Saint Honoré. I first discovered IUNX back in June 2009, around the time of my 50th birthday, when I enjoyed three gloriously warm days of solo sniffing in Paris. While JAR Parfums has just TWO points of sale in the world, IUNX is even more exclusive, for its dimly lit, dark red boudoir of a store is the ONLY place where you can buy their fragrance line. 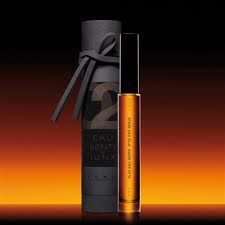 The original visit - or visits rather, as I went back to make a purchase later that day! - predates Bonkers, but even then I kept records of sampling forays, and found these snippets about the IUNX experience:

"Had a great chat with the man at IUNX, who was from Donegal but insisted on speaking in French both times. This may have helped him forget I was from Belfast."

"I bought Eau Frappée, which smells like lemon sorbet and yellow rose petals. Opening is exquisite but fairly evanescent. Mutes down to a gentle musky rose. Bottle is 150ml @ 103 euros, and looks like Luke Skywalker's lightsaber. Comes in a black neoprene tubular case like a policeman's truncheon, topped off with a neoprene bow tie!"

I still have about 20ml? left of my humungous tube, which proved highly swappable on MUA on account of its rarity, and on that Tuesday I had no intentions of making another purchase, not least on size grounds. There simply isn't the room in either of my perfume fridges for one thing! But I did fancy catching up with the latest releases, and on spotting the same sales chap through the store window, put my head round the door and said hello - in English this time - as our French-speaking routine, however it arose last time, was too silly for words! : - ) 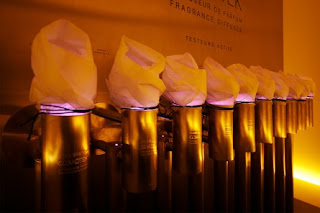 "Hey," I added by way of an ice-breaker: "Aren't you the fella from Donegal?"

"Mayo!" he replied with mock-indignation, and we were off. Ron - as I now found out he was called - remembered my purchase from 2009 and invited me to resniff the other fragrances in their strange Plexiglas trumpets, which wafted the scents by means of a motorised fan. I was especially interested to try Eau Baptiste, which was a new addition to the range since last time. Meanwhile, Ron went back to sorting out a pile of thin white tubes that were mostly on the floor, with a few stuck vertically in the window display. I glanced across and inquired:

"What's with the straws, then? It looks like a game of Pick Up Sticks!" 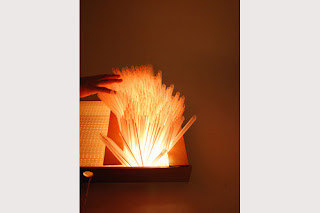 "You are the second person to call those straws!! Those are NOT straws, they are....he mentioned a word I have forgotten, but which began with a "d", I think. Anyway, it turned out that these little straw-like tubes are a light reflecting window dressing accessory. I found an unrelated picture in Google images that nicely illustrates the general idea.

Going back to Eau Baptiste, it was a very "photo-realistic" perfume, to mix sensory terms for a moment. It had notes of wheat, orange blossom and acacia honey, all of which were clearly delineated, and it also smelt green and sappy, like the stem of a rose. It was beautiful and distinctive, but not necessarily what I would want to smell of.

While he carried on creating his straw installation, I asked Ron about his own early scent CV, and quick as a flash he listed his past love perfumes in date order: Azzaro, Eau Sauvage, Polo, Safari and Shiseido Basala. 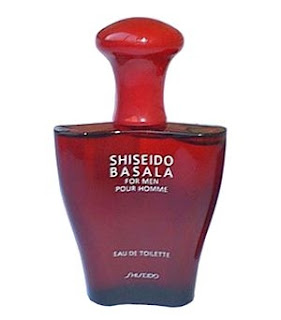 I had not heard of Basala, and have just fetched it up on Google. Interestingly, while the note list has way more going on with it than your average IUNX scent, the bottle is red like the interior of the store....

Here is my quick take on the other scents in the line, created by Olivia Giacobetti, Queen of The Barely There style of scent to which I am generally so drawn myself.

This was moderately spicy, but sadly I didn't care for the combination of notes at all. It was in the same vein as JM Pomegranate Noir, ie reminiscent of a Christmas candle or spicy potpourri. Also, I don't like alcohol in perfumes as a rule - as a note, I mean! - and don't even care for rum as a drink, except in Mojitos. A perfume that smelt like a Mojito I would in fact cross the street to try!

This smelt much as you might imagine from the notes - it was okay, but didn't have the wow factor for me.

I didn't dislike this one, but it was rather too indistinct - the myrrh may have blurred it over in some way.

Now, as a huge fan of Parfumerie Générale's Bois Naufragé (a partial bottle of which came my way this Christmas, courtesy of the very generous Lovethescents!), I would have thought I would have liked this one, but it had a dank, discordant aspect to it. Oh well. 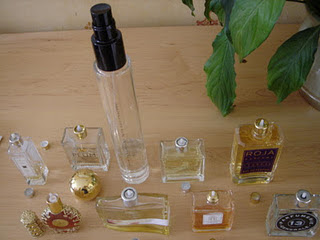 So I will just enjoy the rest of my Eau Frappée lightsaber, I think, though Eau Baptiste was most striking in a "lovely-but-not-really-a-perfume" kind of a way. The highlight of the visit this time was shooting the breeze with Ron about our respective childhoods growing up in Ireland. A beach ball bought in Salthill, a rag doll in Bundoran (on my side), versus Ron's memories of crashing the parental car. : - )

I also inquired about Ines' and Asali's recent visit. "Two fellow bloggers came by the other day - do you remember them? One had a red coat. And red hair. They may both have had red hair. No, don't quote me on that."

I have checked back and Asali is in fact a brunette, which is a good thing in hindsight, as the IUNX store needs all the colour contrast it can get. : - )

For some reason, I still didn't bother trying the Costes perfumes that are sold alongside the IUNX brand. It was the end of the day, and I had got it into my head that they wouldn't be my cup of tea, which may be totally unjustified. On the plus side, it gives me a reason to revisit IUNX next time I am passing. I will remember Ron is from Mayo next time...

Photo of Hotel Costes from tripadvisor.co.uk, photo of bottle from hotelcostes.com, photo of fibreglass trumpets from cafleurebon.com, photo of light straws from designut.org, photo of Shiseido Basala from fragrantica.com
Posted by Vanessa at 18:12

Hahaha, yes it's true Ines did seem dressed for the occasion at Iunx.
Was it only some of the fragrances that had a 20ml bottle? I didn't inquire.

Sorry we missed one another in Paris by a matter of days!

I must say I hadn't clocked that any of the scents were available in a smaller size. We did talk about the price rise since my last visit - I think the 150ml bottles are around the 120 euro mark, or will be soon. Given that I was up for buying one of those in the first place, maybe I would be the last person to know that a smaller size was available... : - )

Those humungous bottles are such a turn-off!
I think there are small sizes of most scents, but not all, the Non-Blonde reported not too long ago.
I think Giacobetti should think about some kind of distribution...

This news about the small sizes is a revelation to me! I was definitely kept in the dark on this point, which was not difficult on a winter's day after 4pm in a store painted a deep shade of red. The fact of the matter is that I am not a natural purchaser of bulk anything, so that gives me another reason to return - to check out the little bottles and maybe spring for that honey wheat one! I must say that 20ml probably excludes it from eligibility as a police truncheon, for when it comes to law enforcement certainly, size matters.
: - )

Ha, I never conisdered the fact that I fit right in at Costes. :)
Is Ron the owner?
If so, he spent most of our visit chatting with Denyse while a really beautiful SA helped us. She really was quite nice and smiling.

Eau Frappee was also on my IUNX shortlist (see, another overlap in our tastes). :)

I didn't know you grew up in Ireland! Ron sounds fun.

I like the sound of L'Ether the most and think Asali wants/has a full bottle, but it's too bad you found it indistinct.

I must tell you that I finally got the Garnier BB cream you reviewed and I love it! Thanks so much for introducing me to it.

Have a lovely New Year's Eve.

I never established Ron's exact role, but he could well be, yes. He was on his own in the store each time I visited, though your SA sounds nice.

PM me if you would like a snifter of Eau Frappee...!

I lived in Belfast till I was 23, and all my childhood holidays were on the west and south west coasts of Ireland, so Ron and I had a lot of common stomping grounds.

So pleased you are happy with your purchase of BB cream. Best on dry skin I sense, but with a bit of powder I can offset the slight oily aspect - that is due to its moisturising properties after all!

I adore Eau Frappee and have you to thank for it <3 Now I am completely intrigued by Eau Baptiste. I had heard of it before but it is difficult to come by. Am wanting to try it even more now. The others don't interest me at all. I have tried Ether and don't like it. It just isn't remarkable, nor is it me.
You STILL haven't tried Costes? Nor the Costes 2? I think we have a mutual friend in Norway that could help there :-)

Interesting to get your take on Ether. It didn't really have much about it, as I recall, and goodness knows I don't usually hold that against a perfume!

No, I failed to try either of the Costes. To have been to the shop three times and still not tried them is poor, I know!