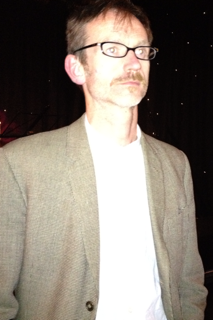 Since my last post, my sister-in-law and I have now met and comprehensively gone sniffing with the delightful Anna of "Anna in Edinburgh" fame. However, I have only briefly popped home before heading off again on a couple more short trips, so I will defer the account of our meet-up until I have a bit more leisure (by which I mean "stationary-and-with access-to-a-desktop-PC" leisure, that special variety which is conducive to blogging. : - )

But meanwhile I just wanted to share with readers the highlight of a night out with friends at the weekend, when I chanced upon this exceptionally tall chap who (to my eye) bears a striking resemblance to Andy Tauer. (I should add that he did kindly give me permission to post these photos!)

Just as the word Tauerade - as in the "signature" metallic/fuzzy base characterising many of Andy Tauer's fragrances - has now passed into the perfumista vocabulary thanks to March of Perfume Posse, I now find myself unexpectedly coining the term "Tauer-alike".

Spotting him across the crowded room in a popular restaurant-cum-nightspot, I went over and came straight out with my request:

"Excuse me, but I wonder if you wouldn't mind my taking your photograph, only you happen to be the spitting image of a well-known Swiss perfumer." 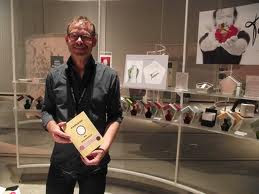 Graeme (as I later learnt his name was) was predictably taken aback, and immediately asked if this was a wind up. I whipped out my iPhone and googled images of Andy Tauer, some of which Graeme felt were a better likeness than others, but he definitely could see my point.

Then I asked if he would mind my featuring him in a "Doppelgänger post" on the blog, and promptly called up Bonkers on my phone to prove that I did in fact have a blog of that name, and to give him an idea of the sort of whimsical spin I might put on the story (or its title, at least!), to which he gallantly agreed. 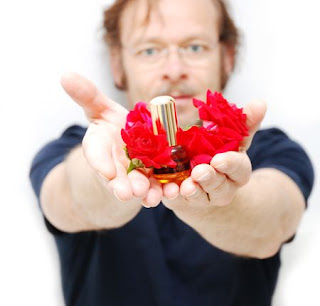 Has anyone else seen a look-alike of a top perfumer?

Do let us know - we could start an online gallery! 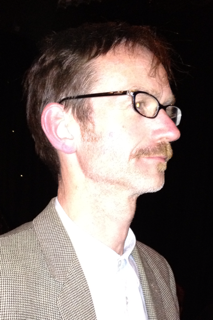 Photos of the real Andy Tauer from Basenotes and fashiontribes.typepad.com, other photos my own!

What a hilarious post!!! And Graeme actually looks a lot like a guy that used to be my neighbor 5 years ago. Unfortunately I've no idea where to find that guy now, otherwise I'd sent you a photo :)

Vanessa, this made me laugh. I hope your look-alike got your blog address down, so he could check this out. (My only experience with meeting a look-alike was my neighbor in Edmonton, Jim, who was a doppelganger for Hugo Weaving. I sat in the theatre watching LOTR, wondering if Jim was actually going to New Zealand to film instead of working in the oilpatch, like he claimed.)

Vanessa this post is a hoot! You also had me fooled! In the brief second that it took the background to load on your post and the text was illegible I thought to myself "Since when was Andy Tauer in Edinburgh?"! Haha!

Vanessa, only you could come up with something like this! So funny ... and yes, he does resemble the Swiss perfumer.

Looking forward to meeting Anna of "Anna in Edinburgh" fame. I always like saying her name in my head ... it sounds cheery and alliterative.

You are hilarious! it's never boring at Bonkers! :)

My only doppelganger experience is with an American dentist bearing a striking resemblance to Kevin Spacey, including prompt crush transfer on my side.

Sadly it didn't work out with either the dentist nor Kevin. :(

Wow, we now have a "Triplegaenger" thanks to your neighbour. : - )

Too bad you don't have a snap of him - this Tauer-alike look is proving to be surprisingly ubiquitous!

I gave Graeme my blog name so I guess he can google it if he is curious to see my post about him. : - )

That's fun about your neighbour looking like an actor from LOTR - what is it with neighbours??! Sounds very plausible to me that he is sloping off to New Zealand to film. Do they have any oilfields round those parts I wonder?, as that would make it easier for your neighbour to combine his two professions...

Btw, I don't know if you currently live in that part of Alberta, but I once stayed in the Hotel Macdonald in Edmonton, and still have a pencil somewhere with the name on it. I also bought a mug in that huge mall that may in fact be the largest in the world? : - )

I am delighted I fooled you, even for a moment or two...!

It made my night, it really did!

And I hope to get to the account of my meet-up with the mellifluous Anna in Edinburgh shortly - have been hither and thither a bit lately, and both writing and blog reading have taken a bit of a back seat.

I can well understand the "prompt crush transfer" of which you speak - my friend Clare, owner of the "perfumista pin-up pooch" I once blogged about, has a massive crush on Kevin, and managed to speak to him after a show in London, or received a handwritten note from him, I can't remember which off hand, but she cherishes the memory of whichever it was!

In the light of this story and your current beau, would I be correct in inferring that you are rather partial to dentists as well as to Kevin-alikes?! : - )

I'm with CPB! When I saw your post in my RSS reader my first thought was: "Vanessa met Andy!" (BTW, your RSS feed is still in "full" mode).
Thank you for the laugh!

And thanks so much for the heads up on my RSS feed. I think I must have forgotten to click on "Save Settings" last time, but it should be sorted now.