Bonkers Is A Bit Behind - And Off To London (Again!) 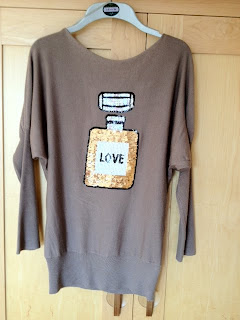 I fully intended to write up my Berlin sniffing sortie (such as it was!) this evening, but got rather overtaken by events and a bit of a bad head. On balance, I would rather give that post my best attention on my return from another flying visit to London tomorrow, and spend the evening instead with a wet flannel and a couple of episodes of Desperate Housewives... An early night is probably also indicated. I don't seem to be managing any of these lately, but rather have been persisting in my attempts to be an American, which can only end - if not in tears necessarily - in chronic exhaustion at the very least.

But I will be back in a couple of days, and meanwhile here are a couple of pics of my latest perfume-themed garment (bringing the total to three now!). This one is the blingiest by a long chalk, though I like to think it redeems itself with the subdued taupe background and intriguing batwing sleeves. I wore this sweater on my recent sniffing outing with Hazel and Anna in Edinburgh, and neither of them appeared to be visibly fazed - or dazed - by its glittering central panel. The ensembles both my companions were sporting were of course also on the colourful side, but for sheer razzle dazzle, my jumper was in a class (I use the term advisedly) of its own. 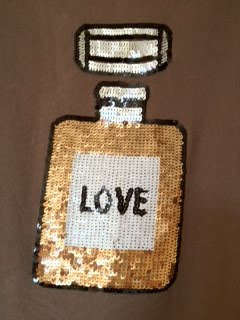 Cool top Vanessa, and enjoy your brief visit to London. Any plans for perfume shopping?

Thanks! I might be lipstick shopping on this trip, but will do my best to resist making any perfume purchases. : - )

Vanessa, I'll leave you to the lipstick shopping then - I'd prefer if it was perfume!

I managed to resist both in the end, helped by the unseasonably fine weather and the fact that I was encumbered with my luggage and generally hot and bothered.

I like that sweater - just enough bling to keep it interesting, but not over the top. I'd wear that in a heartbeat.

Am so pleased you approve of my sweater! I think it would go very well with your colouring.

The blingy part is curcumscribed, I agree, which is the secret of its success.

We need to see a photo of you in said sweater!

Oh and being an American is exhausting! ;)

There is a snap of me in it on my FB wall somewhere, but I look a bit ratty, so when it is out of the wash, I might try taking a better one! : - )

I am glad to hear it is not just me who finds the whole business of being an American so tiring. Beyond your 8pm I am really beat, and don't get me started on those Pacific Rimmers! (For some reason that term sounds a bit rude...)

And guess what my captcha words are "asster ingracti" tee hee!

Not intentionally naughty - the word just rang a suggestive bell that I couldn't quite place...