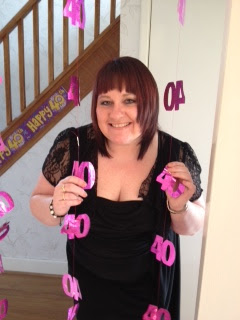 My friend Sharon (my first and most resounding convert to Roja Dove Scandal, as some readers may recall), turned 40 on Friday 13th and celebrated in style. It turned out to be a more auspicious date than it may sound, for some 30 family and friends converged on her home town from all over the country, bearing gifts and trailing party outfits in garment bags. Sharon's birthday haul included some beautiful pieces of jewellery, flowers and champagne, while I gave her a bottle of Piguet Fracas, having noted that it was her favourite of the "big white floral" samples I had given her lately to try.

As I was getting changed at Sharon's parents' house (from whom I am equidistant in age!), I cast my mind back to a few of my own milestone birthdays, which went roughly like this:

18th: Revised for my English Literature A-Level on the fire escape. Parents gave me a suitcase. Was that a hint?

21st: Cleaned the bungalow I had been sharing with two other teaching assistants in France, my housemates having already cunningly skipped the country. Then treated myself to a solo moped ride and a picnic. 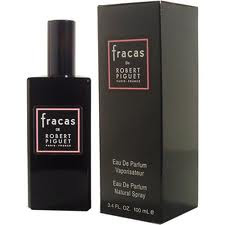 30th: Unintentionally played gooseberry on a yomp in the New Forest with a friend and her...person of interest. Ended up lost - possibly deliberately shaken off - and covered in nettle stings and scratches. This was in those dark pre-GPS days when (as I learnt to my cost) orienteering skills really counted for something.

40th: Checked into a spa for a day of solo pampering. Failed dismally to crack any of the yoga positions, and had a blart in the grounds when I realised I would never receive another greetings card from my mother, who had died a few months previously. Spent the evening doing serious damage to a bottle of Bollinger, which rallied and ended up doing considerably greater damage to me.

So in view of my own mixed bag of mostly solitary birthday celebrations, I was pretty confident that Sharon's 40th would comfortably top them, and so it proved. She had booked a table at a popular nightspot with panoramic views of the sea from its upstairs bar. When we arrived, we were already several sheets of pink cava to the wind, and if I am honest, not all the squinting I found myself doing could be attributed to the dazzling rays of the setting sun. 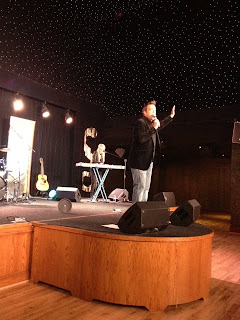 By 8pm, after more pre-dinner drinks, we were seated at our table in a prime spot close to the stage, all set to tuck into a surprise three course meal (surprise in the sense that none of us could remember what we had pre-ordered back in February...), and to be entertained by a Robbie Williams tribute act with the disappointingly normal name of Paul Reason. Now I am not saying we would have preferred the more punningly satisfactory "Blobbie Williams" instead - that's with or without "Gary Lardo" in tow - for that particular Robbie Look-alike-ish is reputed to be quite large, and this Paul chappy was on the stocky side as it was. He did, however, have the obligatory weird eye/eyebrow combo, and a lot of Robbie's moves.

Understandably, given our high liquid intake over the course of the night, repeated trips were made to the ladies, not least by me. Both in the toilets and on the dance floor, I was struck by how fragrant the air was, and enjoyed deeply inhaling this pleasant pot pourri of contemporary women's scents. Everyone at the venue was very dressed up (well, I say that, but we did also spot one or two vertiginously high hemlines, which skimmed their wearers' bottoms more by luck than design. Which in its way I suppose is a sort of dressing "up".) And though people may have skimped on fabric (not in our group, obviously), crucially, no one seemed to have skipped the finishing touch of applying perfume. 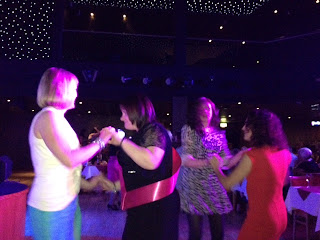 For example, in our party there was birthday girl Sharon, wafting her freshly opened bottle of Fracas on the dance floor, Angela in Gucci Guilty, Ruth in Chance Eau Fraîche, Max in Parisienne, Sarah Jane in Gucci II, while I gave Amouage Honour Woman another spin (chosen with care for its tuberose note, which Sharon loves, but no vanilla, which she hates!). And beyond our table there was the throng of unknown women contributing to this beguiling cocktail of scent...

And my overriding feeling at that moment was one of pride. Pride in my relative sobriety such that I could capture highlights of the night on my camera phone. And I'll admit to a bit of self-satisfaction at the part I had played in helping Sharon find another diva scent to love.

But most of the pride I felt was directed towards women in general - all these unknown women at large having a great night out, myself included. Proud that they cared enough to wear fragrance - any fragrance - not that I smelt a duff one. 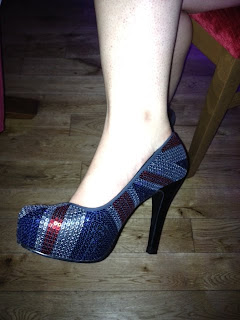 OUR PARTY WINS THE AWARD FOR BEST SHOE OF THE NIGHT! 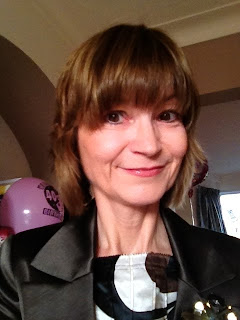 
Now they say that alcohol oils the wheels of a great party, and it would be fair to say that the wheels of ours were pretty darn lubricated. Yes, we bonded through sharing a drink, through making fools of ourselves on the dance floor, and through making light of the burnt bacon (my fault!) at our fry-up breakfast the next morning.

But over and above that I felt an invisible extra connection with every woman in the room who had chosen to put on a Scent Of - and For - The Evening.

Yes, it was as fabulously fragrant a fortieth bash as you could wish for, and I look forward to doing it all again in ten years. Which gives us ample time to find a Robbie act with a snappier name. And next time, I shall remember to smell him as well when he does his mock stage diving routine... 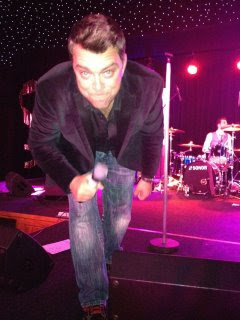 Photo of Fracas from perfume-malaysia.com, other photos my own

I think your parents *knew* you'd be flitting about hither and yon when they chose a suitcase for you:-)

As a fan of Fracas, I'm thrilled to hear that she was out whooping it up on the dance floor with you all (and being worn by the birthday gal at that!). Loved your account, a mix of wistfulness and happiness ... a good read. :)

And you may be right at that about the suitcase. Flitting is definitely in my genes...

I think Sharon would also like Petales, but forgot to bring my sample up with me. It is sitting on the shelf above my computer, waiting for me to blog about it, but I keep "line skipping" post topics, as we fumeheads are wont to do with our perfume purchases.

I guess there was a bit of wistfulness mixed in there - milestone birthdays bring out a reflective frame of mind, I guess!

PS I have dug out a number of photos for the Petales post, uncharacteristically in advance of actually writing it... : - )

Well, now you've got me intrigued thinking about what photos you've chosen for Petales. I don't picture Petales whooping it up on the dance floor, so I suspect they'll be more sedate ... but then again you might just surprise me in that regard. :-)

Haha! I guess I would describe them as sedate, though not necessarily of anything one might describe as obviously connected...bonkers tangents as ever coming as standard. : - )

Oh, blogger ate my first comment! So, sounds like you had a lovely night out - those shoes are pretty awesome! One of the reasons I love reading your blog is all the fun British-isms I learn. Usually, Google helps me figure them out, but not today. You must tell me what the heck it means to play gooseberry on a yomp!

Sorry Blogger is up to its tricks again...and thanks for persisting with your efforts to leave a comment!

Yes, the shoes were pretty special, and she had a matching handbag that was also jolly snazzy!

Glad you enjoy the Britishisms. A yomp is a long and strenuous hike, and to play gooseberry is to be "the fifth wheel"? To tag along with a loved up couple and consequently be in the way is the general gist. Do let me know what the equivalent phrase would be in your neck of the woods?!

Thanks for taking the trouble to do a straw poll of what perfumes women are wearing on a night out, these days. Very interesting. I can see that most Gucci perfumes would be a popular choice.

So nice that you chose Honour to fit in with your friend's tastes.I'm sure she'll enjoy her Fracas and be reminded of you.

BTW your hair is looking great in that pic!

Ah, that makes sense now! No wonder I couldn't find it - it was a combo of yomp and playing gooseberry that befuddled Google! I can't think of any such colorful phrase here, other than just being a third wheel, which I have done plenty of myself!

Vanessa, as always, enjoyed your story: you make them so vivid and live that I can perfectly imagine everything you describe. I even liked Fracas in your story!

I also spent some time with Google deciphering your berries ;)

I'm glad you and your friend had great time celebrating her FFF Birthday.

Sorry for the delay in replying to people's comments. I am away with limited Internet access, and though I did try the other day from my iPhone, Blogger just seized up on me. Back on Sunday and will catch up with everything soon!

Finally home, and hoping that Blogger won't misbehave this time...

Yes, it was interesting seeing what everyone was wearing to the "do". I agree that various Guccis make a good choice for evening, indeed I remember wearing the same frock with Gucci EDP to another birthday bash a few years back!

Thanks for the compliment about my hair. It seems to have lightened up considerably since that shot was taken, but I am still happy with the way it is going (over which I have limited control, it would seem!)

Ah yes, I must apologise for my tendency to mix metaphors - which if they happen to both be Britishisms, could result, as in the present case, in a very strange turn of phrase... : - )

"The third wheel", that's it! Of a bicycle I assume, while if it were a car it would be the fifth wheel that was redundant. But there again, a third wheel would transform a bicycle into a perfectly serviceable trike!

I was most amused at the thought of your spending time with Google deciphering my berries!

The thing is with Britishisms, I never know in advance which they will turn out to be - or not for sure, anyway - until some kind reader reports their puzzlement. : - )