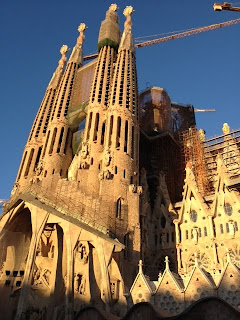 Last month I spent three nights in Barcelona on a mini-break of such spectacular cost-effectiveness that I shall undoubtedly go again, just to feel smug about my holiday bargain, never mind the fact that the city is awash with visitor attractions. These include broad, tree-lined boulevards such as the famous La Rambla, Parc Güell with its "kimono dragon" standing sentry at the entrance, numerous other quirky and satisfyingly wavy structures by Gaudí, a dazzling palm-lined marina, the spiky, brooding squares of the Gothic quarter, not forgetting the curious Christmas log novelties that reminded me compellingly of Thomas the Tank Engine in a Santa hat. If I am totally honest, you could actually spend an entire weekend in Barcelona just browsing in the many branches of Zara, but I valiantly resisted the urge. 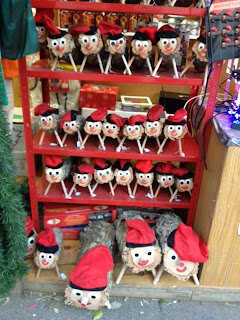 APPARENTLY YOU TAP THEM AND PRESENTS SPILL OUT - I REMAIN SCEPTICAL

For Barcelona is also a prime destination for the travelling perfumista, not least on account of its small but perfectly formed perfume museum, or MUSEU DEL PERFUM in Catalan. Housed at the back of one of a chain of niche perfumeries called Perfumeries Regia, you have to ask one of the sales assistants for the key and pay an entrance fee of 5 euros. I usually go out of my way to avoid fee-charging museums, but decided to bite the bullet and enjoy having this one all to myself for what was by no means an excessive entrance charge. 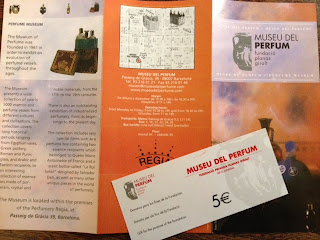 And am I glad I did! The place was a veritable Aladdin's cave of vintage perfume bottles and other artefacts charting the evolution of perfume vessels - nearly 5000 of them all told - from the very beginnings of fragrance. As regards the exhibition of industrialised perfumery, the scent bottles were arranged (very loosely) by brand and chronology, or so it seemed to me - and to fully appreciate this arcane and somewhat bizarre collection you really needed to press your nose right up against the glass. As no one was looking, I did just that. 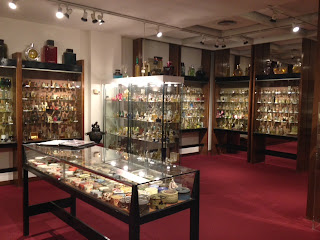 I noticed a couple of sub-themes (not all intentional) to the exhibits, eg PERFUMES WITH PROVOCATIVE BOTTLES OR NAMES. In this category fell the now controversial series of Golliwog perfume bottles, and a handful of scents with the amusingly unsettling names of ORGIA, SNUFF, GONG, COCAINA & ECHO TROUBLANT. 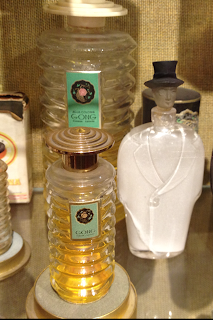 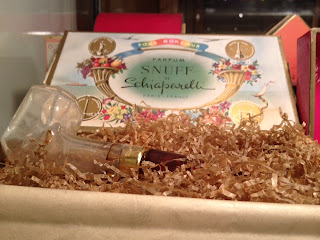 There was also a cabinet devoted to perfumes from different countries, one devoted to puffer bottles, and here and there, examples of arrestingly beautiful packaging whose inventor had truly thought outside the box. 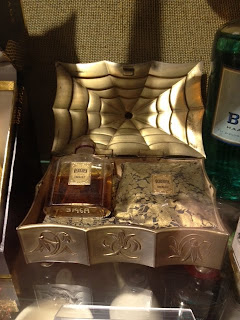 Another thing that struck me forcibly about the collection was the sheer number of vintage brands of which I hadn't heard - these may even have outweighed the ones I did know, though it was a close call. I noted down a small sample of perfume house names that were unknown to me including:

CORYSE SALOME
COLGATE(!)
G DANFRE
CIRO
MISTINGUETT
MADELEINE DE RANCH
ZOFALY (not a high end wallpaper brand, as you could be forgiven for thinking)
MORABITO (not to be confused with an inner city district in Berlin)
MURY
LEGRAIN
JEAN BOUVAIST

After the sensory overload of the museum, where I must have spent a good three quarters of an hour gaping in wonder, I emerged into the body of the Regia perfumery, with its fine collection of contemporary niche scents. 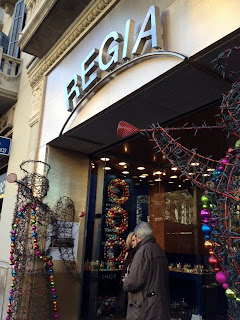 I had rather shot my bolt, however, in terms of absorbing any kind of information - olfactory or otherwise. So rather than sniff any of the testers that were new to me (of which there were a goodly number), my eye was drawn to the curiously named scent, EIGHT & BOB. A pamphlet explaining the charming story behind this cologne - which involves the son of a French aristocrat turned amateur perfumer, Albert Fouquet, his trusty butler Philippe and a young J F Kennedy - was placed on the display and the full text is also reproduced here.

Sadly, the scent itself was not to my liking - a rather soapy cologne that put me in mind of Maison Kurkdjian's Cologne pour le Matin - but it gets huge props for the off the wall nature - and origins - of its name. I do urge you to read the full story! 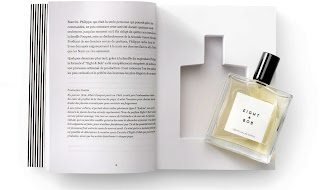 EIGHT & BOB - ONE SAMPLE WOULD BE QUITE ENOUGH FOR ME, THANKS

Apart from visiting as many tourist sights as I could cram in in the time, there were two other things I had hoped to do during my stay in Barcelona: identify the statue in this painting of mine, which inspired my review of Carner Barcelona's scent D600, and visit the headquarters of the Carner perfume house itself. 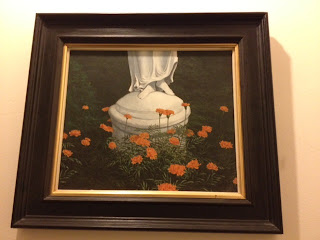 Well, I kind of failed on both counts! I did visit some gorgeous parks, and scrutinised the feet of the many female statues contained within, but failed to locate THE ONE. 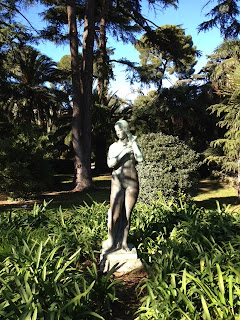 Aborting the statue quest, I turned my attention to the Carner Barcelona trail, but though I spied my first Carner nameplate pretty smartly at the bottom of La Rambla, it was a red herring. 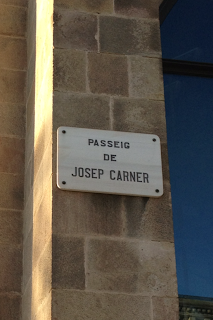 So I got out my map and pinpointed the offices of Carner on 600 Avenida Diagonal (the clue in the name D600, hello??), and hotfooted there by metro and bus, only to find them shut. Doh! Well, it was a Saturday, after all. Turns out that this address is the administrative office of the company, but there is no associated perfumery, like that time I went to the wrong address of L'Artisan Parfumeur for the launch of Séville à l'aube. 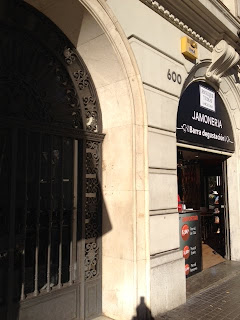 Not to worry, I thought to myself, and repaired round the corner for the crepe of my life and a cup of tea. Not even a crepe so much as a farinaceous mixed media food collage. 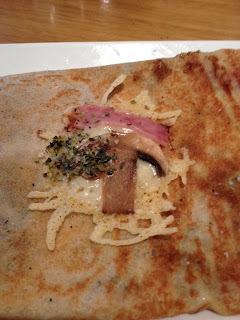 And finally, here are a couple of snaps of OTHER people posing with the "kimono dragon" at the Parc Güell. It was impossible to get near the poor creature, he was in such demand! 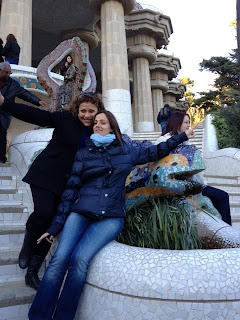 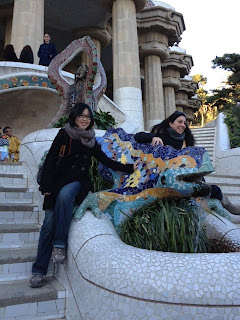 Oh, and one last snap of someone I met in the street... 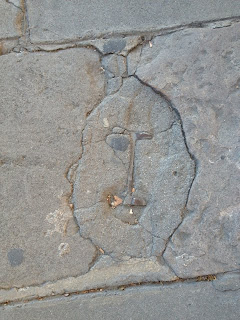 Photo of Eight & Bob from roullierwhite.com, other photos my own

Well, isn't Barcelona beautiful? I was amazed with La Rambla. I was playing tennis at the time and couldn't leave nike store. Anway, I like Eight & The Bob a lot. Really reminds me on suits, classic man, grooming type. I would call it as bussiness type of scent :)

It is an amazing city, and I hope to return to explore more of it. You appear to have had the same problem with the Nike store as I did with Zara, haha!

I can imagine Eight & Bob being classic and clean on a man just as you describe. My skin (wrong gender for starters!) tends to amplify soapy notes, so it was too much for me at the time of testing, though the fragrance blotter smells rather pleasant now, several weeks later.

Juraj, i have been Barcelona many time its a quite nice city i like it ... I prefer if you can go in spain Valencia ... with the great hudge science city ! Nice post Vanessa ! kiss to all here ! Marie

Thanks for dropping by! I haven't been to Valencia, but have heard good things about it. I also love Seville, Segovia and Toledo. I bought two patchwork tortoises in a flea market in Madrid once, and called them Segovia and Toledo in fact. :-)

How nice to have a perfume museum all to yourself! I hope to visit Barcelone one day. I'm glad you got such a bargain break.

BTW I just caught up with part 2 of your KP post. How cool to hang out with the celebs at the Groucho Club! I do hope Helen Lederer has recovered from her appearance on Splash Saturday night :)

I am sure you would love everything about Barcelona, even if it didn't have special attractions for the perfumista.

The visit to The Groucho Club was totally surreal, and Helen very down to earth and non-stuffy. And of course we weren't even meant to be there, but in a little noodle bar Katie likes that was somewhere in the general vicinity!

Why don't you like paying for museums? Do you have a formed position on the subject?

Did they prohibit taking pictures in that museum? If not why do we see so few of them? ;)

Good questions both. The Gaudi houses and church were something like 16 euros each which just seemed a lot to me, much as I would have liked to see inside. I guess I like to see how far I can get enjoying a city for free, and when I have run out of free sights, then I'll consider forking out for the museums! The weather was so glorious the weekend I was there that I wanted to be outside mostly. I did spend 24 euros on an all day "hop on, hop off" city bus pass, and that was well worth it.

Re the museum, I took a ton more pictures, but was concerned about making the whole post too long and also had a sudden wobble about copyright or giving too much of the game away in terms of the museum's exhibits. I could be wrong on all counts, though!

Ha! It is like a "Strictly Go Diving" and I don't remember a show getting such a panning in a long time. Helen was very game though, as you can imagine. No many women would want to appear on live TV in a swim-suit and wet hair. Not me for sure!

Have since read a bit more about it and I totally agree about the not wanting to appear in a swimsuit with wet hair. She is very game I say!

For health reasons I can't travel, but if I could be magically transported somewhere I would definitely pick Barcelona as one of my prime choices. Love all things Gaudi and can't imagine being in Park Guel. AND, my number one fragrance is D600!

I hope you enjoyed it for both of us!

Thanks for your comment! I am sorry to hear you are unable to travel, but hope I was able to "transport you" to some of the sights of Barcelona - the Gaudi stuff is as wonderful as it's cracked up to be, if a little pricy to visit inside.

I am happy that you have a favourite scent from that city, D600. Isn't it great? I spied a tester for their new woody oriental one that I briefly sniffed and liked a lot, but must see if I can find a sample to test at more leisure.

I'm happy to leave the traveling to you, Vanessa, as long as you continue to share the fun :)

I will pursue the new Carner one (well, fairly new and new to me!) and post more thoughts in due course.