By George! - and By Terry - Woodforde Perfumery in Regency Sidmouth 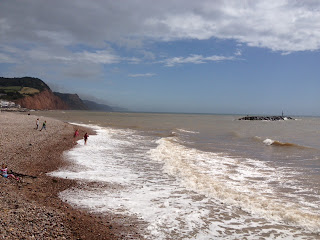 So I have come back from my mini-break on the South Coast to find that I have three new followers - hurrah! - and my patio plants haven't died.  I actually had a lady lined up to water them, but in the end nature did the job for her; it also comprehensively watered my holiday destinations in several counties, though it couldn't put a dampener on my enjoyment.  The novelty hat party was a great success, featuring some very fine specimens, including an entire beach scene, an allotment with integral garden tools and vegetable matter, a traffic cone, a putting green, and a funny construction fashioned from a low slung fez lavishly accessorised with bunting and sailing pennants.  (Picture on request.)

Next stop was Devon, where I stayed with an old school friend who has recently retired to the Regency resort of Sidmouth.  Apparently the demographic profile of the town exactly represents how Britain as a whole will look in 2050, when my generation will also swell the bulging ranks of the elderly - if we are still about!  It is the sort of place where the fish and chip shops do 'pensioners' specials' and 'senior suppers', and where you are never more than 100 feet from a seller of mobility aids - even the charity and 'pound' shops had a selection, prominently displayed.  Well, not 'pound shops' exactly, but those bargain chains that stock a changing kaleidoscope of stuff they got in cheap.


As well as being an architectural delight, and rather sedate and slow-paced - the mobility scooters have a top speed of 8mph I gather, and that's only certain models - Sidmouth boasts a traditional-style niche perfumery called Woodforde & Co, of which my friend thoughtfully apprised me within minutes of my arrival! What a serendipitous bonus to my weather-challenged holiday, and Woodforde's was our first port of call as soon as the shops opened the next day. 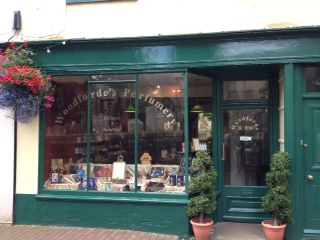 Situated in a picturesque spot opposite the church, Woodforde's is run by John and Jane, who made us very welcome.  We chatted about the latest releases from the various houses they carried.  On the shop's website I found this summary of their brand strategy:

'Sourcing original ranges from small, individual perfumeries that rarely make it to department store shelves, some of our fragrances are the creations of new, up-and-coming perfumers; others perhaps are the neglected classics from small, historic perfume houses that modernity has (thankfully) passed by.'

So without further ado, here is a brief run down of what I sniffed in store - mostly on card - as my friend stood patiently by...

Carven Le Parfum - a pretty, generic, sheer and slightly watery floral.  I was reminded of Balenciaga Paris L'Essence - it was very much in that light register.  In hindsight, I do think I should have tried Carven Le Parfum on skin, for Robin (whose taste is very similar to mine) is pretty complimentary here, and counsels against testing this one on paper, where it reads as too clean.

Carven Ma Griffe (reissue) - fierce green chypre in that general 'retro' Fidji / Givenchy III vein.  I could imagine this being much like the 1946 original, though I haven't smelt it.

Acqua di Genova Contessa di Castiglione - Lucy Raubertas of Indieperfumes bottled!  Well, it has her Facebook avatar on the box, certainly.  Woodforde's helpfully explain the background to the scent on their website here. 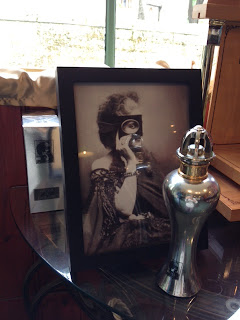 This was an instant 'high level like' for me, and it was the only fragrance I tried on skin.  I should have asked for a sample really.  I should have had one of my little snap-on vials with me in case the owners didn't have any samples, or the wherewithal to make one. Contessa di Castiglione was a milky, slightly almondy - but not too much, as I don't usually care for the note - delicate floral.  A bit like PG Bois Naufragé without the fig or the wood - and with extra flowers.  I know that is a totally lame description, but my blotter doesn't smell of anything anymore!  But let's just say: 'Lucy, if you are going to be a perfume, you could do a lot worse.'

Well, well!  Another almond, redcurrant, musk composition - who'd have thought it? And I also liked this one very much indeed - it was the highlight of the line, and were I not in possession of not one but two bottles of Bois Naufragé I would have been very tempted to make a purchase.  It had a sparkling quality that Bois Naufragé lacks, giving it a bright, upbeat aspect in addition to the comforting milkiness that I enjoyed in Contessa di Castiglione. 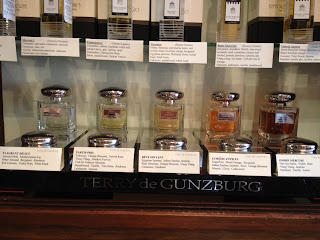 Of the rest, I would like to try Lumiere d'Epices and Parti-Pris again (respectively a spicy orange floral and a big floral oriental).  Ever the good sport, my friend tried Parti-Pris on card and likened it to high end bath and body products - which I can kind of relate to - though I liked it as a perfume all the same.  Rêve Opulent, a very diffident gardenia scent, also fitted that bill for me. It was extremely faint, and the not remotely the grand kitchen sink production its name suggests.   Then the opening of Ombre Mercure reminded me hauntingly of Lalique le Parfum, noted for its bizarre cumin-heliotrope accord.  That said, I am becoming increasingly suspicious of card-only trials, so I wouldn't pass up the chance to try this or any of the line again on skin to be sure.

So as with Sidmouth the town, I would like to spend more time with the Terry de Gunzburg range - and the milky almond Contessa / Lucy. ;-)  Meanwhile, here are a couple more holiday snaps, as if any further enticement to the area beyond a bijou niche perfumery were needed...


If anyone else has stumbled across a niche perfumery in an unexpected spot, do let us know in the comments!

How wonderful to come across such a wealth of new perfume experiences in an unexpected place -- and I am going to have to hunt down the Countess perfume of course to try it for myself. Must be a sweet scented population around about there. I wish we had such a place in Brooklyn nearby, considering the numbers of people who live here.

It was a real find, and a lovely way to kick off a day's sightseeing. I assumed you had tried the Countess perfume so now you absolutely must! Sweet scented population indeed - certainly a bit almondy. ;-)

How nice to find a niche perfumerie in such an unexpected location. Wish that happened to me. I found one on the last day of my holiday in Sicily which was rather frustrating. I wonder how Juliette Has A Gun goes down with the local demographic!

Isn't it always the way to discover something good towards the end of one's holiday? I have also been on quite a few where the sun didn't come out till the last day. ;-) I have never been to Sicily and I hope you had a great time!

This post was pure nostalgia for me becaue I spent a summer in Sidmouth as a child and it was wonderful. We had cream teas, and miniature sailboat races, and the most delightful cat( she came with the house). She would listen to everybody's bedtime stories in turn in a very dignified way, and leave mice on the kitchen mat next to the milk every morning!

Carven's Le Parfum has ended up on my skin quite a lot recently. A real fresh floral, very pretty.

Lovely to hear from you and I am so glad this post struck a chord! I would never had guessed that a US-based blogger like yourself would have had childhood memories of Sidmouth - I bet you would find it just as elegant and charming today. I am not sure I would have relished the cat's antics, mind!

I am determined to try Carven Le Parfum on skin next time. My taste is so closely aligned with Robin's for one thing, plus the notes sound as though it should be something I'd like, but on paper it fell rather flat.

I like reading your travel stories since mine are usually less... exotic(?). Most places I go to you would expect to find a perfumery or two, so it's not a surprise.

Out of all perfumes you've mentioned I've recently tried Carven Le Parfum and completely unexpectedly liked it. A friendly SA gave me a sample and I tried it without expecting much because I hadn't read anything about the perfume before and I didn't know that brand. It wasn't until I told myself: "Hmmm... I like it. It smells not bad at all" that I went online and found out who was the nose behind the perfume (to my disappointment, I must say, since I try really hard not to fall for this perfumer's creations - because of his attitude towards bloggers).

I know what you mean about the places you visit - if by that you mean larger conurbations / cities as I gather you favour in your travels - but when you factor in the population of Sidmouth of 15,000 (albeit swelled by tourists in season), I found it a pleasant surprise to come across a niche perfumery of that calibre. Stafford has four times the people and nothing to compare in terms of perfume outlets!

The more I hear and read about the new Carven, the more I feel sure I need to give it another go, on skin next time, so thanks for giving us your take on Le Parfum. I understand your reservations about its creator, but his work is all around! ;-)

Dear Bonkers
One wonders how on earth one didn't know about your splendid site before, or at least how one failed to stop of and stay for a while.
So many splendid things here, as indeed there seem to be in Sidmouth.
Such a little perfumery sounds delightful to me, especially as so few places stock Caron and Etro these days, both woefully overlooked.
As to Carven's Ma Griffe, the current is the best version for many a long year... though my knowledge doesn't stetch quite far enough back to the original.
Keep travelling, oh and consider me another new fellow traveller!
Yours ever
The Perfumed Dandy

Thanks for your charming comment. I do believe you have dropped in before, but it would be grand to have your travelling company on a regular basis. I would liken Bonkers to a rather wiggly B-road in the blogosphere. I am approaching the 400 post mark though - I am surprised I have been that prolific. ;-)

Woodforde's had a fine mix of fragrance houses in my view, and they have told me since I wrote my post that they plan to add some other modern brands. The overall ambience of the place will always remain traditional, unless on a mad whim they suddenly refit the shop along the lines of Space NK, which I very much doubt.

Interesting to get your take on Ma Griffe - it is not a style of perfume I particularly care for, but I thought it very well done.