My woman in Havana: a friend visits Habana 1791, a historic Cuban perfumery

Shall I just stop here? I'll be honest, this entire blog post is but a flimsy vehicle for its winning title. But though it is tempting to quit while I am ahead, I will carry on, because there is a genuine perfume-themed story in here too. And then of course there's the fact that President Obama paid a state visit to Cuba this week, which finally galvanised me into blogging synchronicity.

Now I like to think of myself as having been good at geography from an early age. Even at 11, and living in Northern Ireland, I could have told you that Peterhead was noted for its fishing industry, Derby for lace and Redditch for needles. But Cuba? I fear I have always been shaky on Cuba. I associate it (rightly or wrongly) with cigars, sugar cane, and bananas. And waterboarding in Guantanamo Bay. And whirring ceiling fans and Mojitos. Not forgetting photo shoots featuring vintage Cadillacs in eye-popping shades of pink and powder blue, parked in front of crumbling mansions - the perfect backdrop for that models-draped-on-bonnets-style of ad campaign and calendar. And as it happens, I have been to Little Havana, but it is in Miami, so doesn't count.

Okay, so I know my perception is rather superficial and cliche'd, even if I am right about the bananas, which is moot. Obama announced that his historic meeting with Raúl Castro marked the end of the Cold War, but I gather from the news that his discussions with the Cuban President were at the far end of the full, frank and robust spectrum. For ideologically the two leaders are poles apart, and life in Cuba under a Communist regime is no picnic for its citizens. That said, an online article from WSVN News last August points to changes afoot...


"Since the Cuban government began to allow residents to open businesses, there has been an explosion of restaurants, vendors selling handbags, art and jewelry in the capital city."

The article goes on to mention a couple called Javier and Shona, who opened a Californian cafe recently, but have difficulty getting hold of food:

Now there's a scary thought for a turophile.


So enter my former English teacher, Sheila, who, as you may recall, was the first to be featured in my perfume protege series. She went to Cuba on holiday the winter before last (I know, I know!), and wrote to me on her return:

"I did try to boost your blog readers - by one - in Cuba, but hit a wall when I realised that the young travel guide I was speaking to didn't seem to know what the Internet was and certainly had never heard of a blog. This is someone who spoke 4 languages and had a degree. That's Cuba. The reason I mentioned your blog was that I had managed at one stage to drag her into a perfumery away from the official government approved route she was determinedly following, from one statue or square named after a national hero to another. We had been headed for a museum of the guns used in the Revolution at the time."


Sheila was pleasantly surprised to have chanced across the perfumery in question, given the dearth of shops generally in the city.  Habana 1791 describes itself in fact as a 'perfume shop-cum-laboratory', and is housed in a beautiful 18th century mansion, complete with a striking collection of vintage perfume making equipment. Habana1791 offers 12 'ready-made colognes', many of which have their roots in Cuba's colonial past: Rose, Jasmine, Violet, Orange Blossom, Lila, Ylang-Ylang, Patchouli, Vetiver, Sandalwood and Tobacco. Custom blends / mixtures of these scents are also available. Sheila mentioned a chocolate-forward scent as well - as with all the other ingredients, the chocolate was grown on the island, though local sourcing is reportedly not without its challenges. Oh, cocoa - a crop I forgot!

Much emphasis is placed by the owner, Angel Martinez, on the aromatherapy value of specific perfume notes - here are two examples:

"Rose oil is aromatic and intense. It is always linked to love and sensuality. It counteracts states of violence and aggressiveness.

Orange blossom causes a feeling of peace and relaxation. It is revitalizing and gives joy to the body and mind."

Oh, and they also offer massages with perfume oils!

In terms of prices, I read varying reports of the perfumes costing between $5-$20 US dollars each, which would still be out of reach to most Cubans, for whom the average wage is more like $15 a month.

Then the bottles - which the customer can choose - are very distinctive. Some are made by local ceramicists, others are imported, and they have a cork sealed in wax. Not unlike the raspberry gin my friend David gave me for Christmas...! 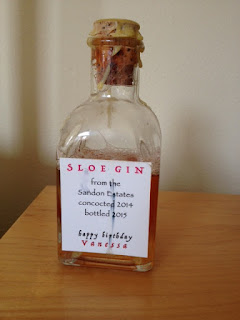 Have you been to Cuba? Would you like to go? Can you confirm or deny if they grow bananas?

I've never been to Cuba, but want to. And I should probably hurry, because I'm not so sure that everything will change for the better on the island. Before the revolution it was a playground for a corrupt and brutal dictator amd his family, the mafia, and the CIA, and I fear in a few years it will be Chinese and American investors buying of half the land and digging for gold. (figuratively).

I hadn't thought of that possibility, but you could well be right. Cuba would offer a great deal of bargain real estate - much more so than the Docklands area in London, say, yet the foreign investors still pour money in there.

Ha! Brilliant. I can neither confirm nor deny the presence of bananas but I'd love to visit and find out. I also keep hearing that it's best to go soon, before it changes out of all recognition.

Well done, Sheila for the diversion.

Who could resist a bottle of wax sealed Tobacco Cologne? Not me!

Turophile! Never knew, certainly qualify. I've never been to Cuba, but my sister and brother-in-law have visited, and a close friend has gone twice (escaping winter while working in Ottawa). Have to admit that my first thought about the rapprochement was that all the American tourists would overtake the Canadians' secret. As well as the US taking over everything.

I have to say that I do think that the title plays a great part in your story's success :) (in general, love your titles!)

I've never been to Cuba and I don't think I'll ever go there, even if it becomes an allowed destination for the U.S. citizens: it hits too close to home, figuratively speaking ;) (I think I had all the socialism I could stomach in this lifetime).

I think we should send you on a banana reconnaissance mission. ;)

Yes, I am glad Sheila steered the guided tour in a more fragrant direction.

And I can imagine you'd like the tobacco cologne!

I count myself as a turophile myself, but had never known the term before. ;)

Glad your friend and family have enjoyed a visit to Cuba while it is still relatively undiscovered.

And that is one of my most satisfying titles, though I say it myself. I should maybe read the book now, hehe.

You do make me laugh! I can well imagine you have had enough socialism in your youth to last you a lifetime.

I don't think Cuba is high up my bucket list, to be honest, but I like the sound of the architecture.

They've GOT to do a good tobacco scent, though, right?

I have not been to Cuba, and I have no idea if they grow bananas! Nonetheless, the talk of bananas reminds me of my mother - she grew up in (barely) post-war Korea, and for the longest time bananas were a rare delicacy in Asia. She has an acquaintance now that was part of the Korean aristocracy before the war, and his family was so rich that he got to eat bananas as a kid though. It's hard to imagine something as (dare I say) mundane as bananas being a rare and exotic treat!

One day Vanessa I will get to Cuba. It's been on the list for years.
The friends who have been speak so highly of it as a destination..
Portia xx

If I have a chance, I'd go to Cuba tomorrow. Fantastic photo opportunities. Even if I have to go without cheese for a few days, I'll manage.

I'm a turophile (I didn't know the term. Thanks for enlightening me) and I guess I eat cheese almost every day but there was a time when I had to ration tiny pieces of cheese or not having any at all for weeks. I was living in Zanzibar at that time and cheese was such a luxury item and wasn't easily available there. It was a tough time.

I loved this post but the lack of cheese in Cuba does make me pause.
Unfortunately haven't been, but would love to, and now know I would go to Habana 1791 when in Havana. Sounds like a place IFRA and time forgot-how wonderful!

Hang on, did we mention rum? I am now going to seek out my ancient sample of Czech & Speake Cuba Cologne -- purports to have both rum and tobacco notes. Nice!

I was interested to hear about your mother's childhood, and its dearth of bananas. Her experience reminds me of ex-Mr Bonkers' mum, who saw her first banana after the war. A schoolfriend's dad brought it home from somewhere exotic, and sadly it was already black and overripe by then!

Well, if your friends speak so highly of Cuba, I should perhaps place it higher up my bucket list after all. If you make it there yourself, do report back! Xx

I never cease to marvel at all the places you have lived! Sorry to hear you had to seriously pace your cheese eating over there. ;)

Glad the potential lack of cheese wouldn't deter you from a visit to Cuba. I so agree that the place is a photographer's dream!

I laughed at the idea that this perfumery has escaped the watchful eye of IFRA.

Good to meet a fellow turophile. You and Magpie might wish to travel with your own supplies and a mini fridge. ;)