The Smell of Despair: random off-topic post on how not to sell a sofa

Apologies for the lack of squarely perfume-centric content of late: I do have a couple of perfumes I quite fancy writing about, but before I get to those something else always seems to catch my fancy! I am gearing up at some point to write a piece on skincare, and one on sleep, and one on "life hacks" I was surprised to discover recently. But I'll admit to having been majorly sidetracked by a full-on house project lately that has taken the best part of a month, involved preternaturally early starts, and consumed my attention - and an entire jar of sugar in the workmen's tea. ;) I could write a post about that experience perhaps, as lessons have been learnt. Much as they were when I had the main bathroom refurbished back in 2016, and reported on that process, which was harrowing and instructive in equal measure. 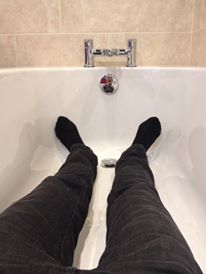 And because of my distracted state, instead of something more germane (feeble pun in the title notwithstanding), I have decided to split an infinitive and finally do the silly post I threatened to write some years ago (bet nobody remembers!) - on how not to sell a sofa. I don't believe I have ever sold a sofa myself, but I have bought a few...er...a lot, even. Looking back, I bought five for the house I shared with ex-Mr Bonkers (they are all still there too); then I have shoehorned five into this house, which I am astonished to realise on totting them up, and have two in France - one a cast off from my friend L, which was gathering dust in her barn, and goes back to her student days. Of the sofas in this house, two were bought on eBay, two on Facebook Marketplace, and only one was new - bought at a very good price from a manufacturer near Nottingham which deals directly with the public in a limited way, but doesn't advertise the fact. The company allegedly made the chairs for the film Dark Shadows, starring Johnny Depp, but I certainly didn't run into him browsing through fabric books on my visit to their showroom. Finally, the one in France that wasn't a gift was another eBay bargain. So I may be a bit of a sofa tycoon, but I am a canny shopper with it.

Now the fact that I have searched for so many sofas online - sofa surfed, you could say! - means that I have seen a lot of listings, and formed a view as to what is and isn't conducive to making that sale. There will undoubtedly be other factors, but for my money these are some of the problem areas that occur in adverts:

Now I accept that in order for a sofa to be comfortable, a degree of padding is required. But these examples of "extreme upholstery" take the concept of pneumatic seating to a whole new level. 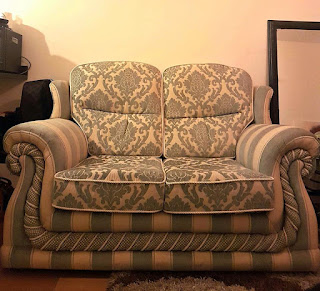 This one arguably has a 'Birth of Venus' scallop shell vibe going on? 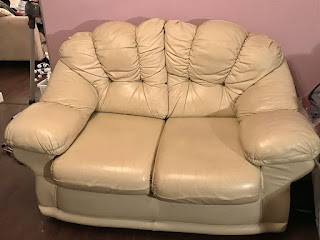 This imposing black and beige model is free to a good home! 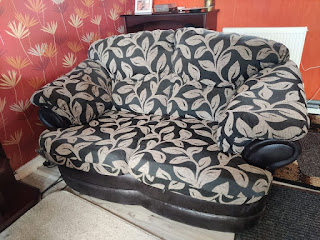 I nearly named this "implausible antimacassars", for that is what the fabric draped over the back of the sofa below reminds me of. 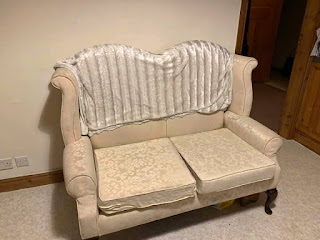 And here is a covert operation involving cushions AND strategically placed fabric. 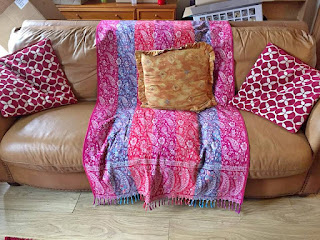 And another one... "Throwing" everything at the cover up operation. ;) 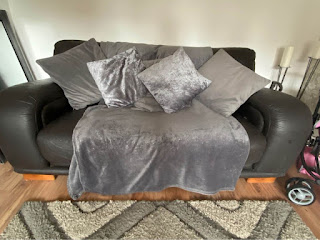 Sofa is not "staged" to its best advantage

I have a friend who - as a kind of running joke - posts photos on Instagram of furniture he has spotted abandoned on street corners. The photographs below are not quite that, but not far off it! 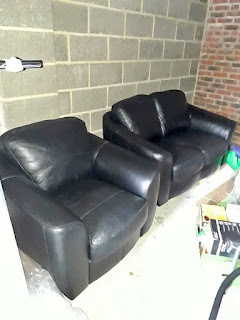 Not a very scenic backdrop, but a bonus pouffe. 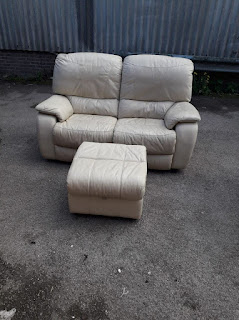 This point is related to the staging one above, but concerns the accessories placed on the sofa itself rather than the background of the photo.

Strangely, it IS possible to have too many cushions, and I speak as someone who errs on the side of profusion. 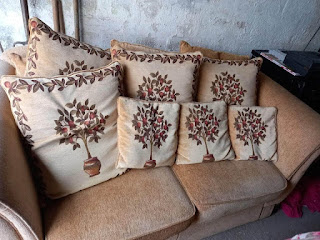 Meanwhile, this sofa strikes me as crying out for a "balancing cushion".

Actually, this category has some overlap with the others - or probably would have if you could see all the items in question. Full marks for transparency, mind. 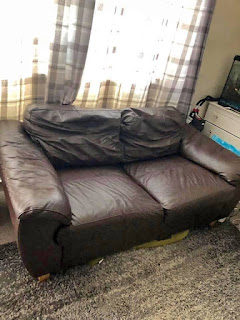 At least this throw and baby drink paraphernalia? are not disguising any imperfections as such, but it doesn't make for a smart presentation of the goods. 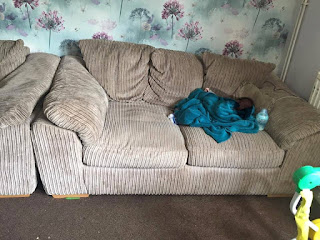 The seller of this one is both transparent - and persuasive... 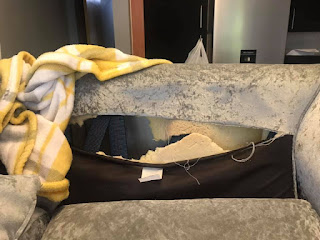 By way of contrast, here is how the sofa that ended up in France was displayed by its owner: 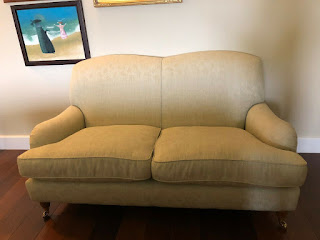 I kept it for a while in the garage until I found someone to transport it over there (see photo at the top of the post). If I ever decide to sell it I have the listing photo ready to go! ;)

Have you ever bought or sold a sofa on the Internet? Do share your good or bad experiences!

Labels: hiding flaws with bits of fabric, how not to sell furniture, overly padded sofas, selling a sofa on the Internet, staging a photo

Only ever bought sofas from furniture shops (I know. Weird.) But I remember as a very small child, the arrival of a 2nd hand Chesterfield and my mother reaching down behind the seat cushions. And coming up with a horn-handled bread knife which we used for year until it was accidentally destroyed. The sofa was eventually replaced by a 'contemporary' early 60s suite upholstered in red and black moquette - which promptly disappeared under blue chintz loose covers.

Furniture shops were the way ex-Mr Bonkers and I went - all five were purchased in conventional outlets, but it was when I struck out on my own that the thrifty MO set in...

A horn-handled bread knife sounds a great find! Over on Facebook, Jim Fogarty mentioned finding money and a frog down one sofa, which reminded me of the maturing bond with the Royal Sun Alliance that magically emerged from Father's ancient grey settee in Lampeter.

Hi Hazel- i think it is incredibly brave of your mom to reach down behind the seat cushions""! Did she use gloves or did she go barehanded ? *shudder*... The knife does sound cool, but still...
@Vanessa: i have to say that the sofas you showed here are rather, erm, eclectic? (what's a nice synonym for fugly...) To be honest, the only one i actually liked was the last one (the one that's in your French house) with those adorable claw legs! I am still on my first-bought sofa (which i think is 20+ years old now?) and thankfully have no space for more. Keep wanting to get a faux-Chesterfieldy one but ... the one i have is still soooo very comfortable! (So i just bought myself the new and first Guerlain advent calender... just to make this a bit about perfume haha!) have a lovely day, Wendy

Very much appreciateded the accumulated knowledge gleaned from your sofa surfing.
Particularly enjoyed the pics of those adly misjudging the sofa to cushion ratio.
I bought my current sofa new from the Internet. It looks good and is the right size but not comfy enough for protracted lounging on really.
As ever,you have great taste.

Nice to hear from you! Some of the sofas pictured are quite "out there", I agree, and the unifying factor seems to be bulk.

You obviously made a wise purchase if your sofa is still going strong after 20+ years. One of the ones I left at my last house was from the late 80s, so though a bit saggy looking now is still good enough for occasional use in ex-Mr Bonkers' music room.

Enjoy your advent calendar - though obviously not just yet! Thank you for turning the topic back to perfume...there are some more fragrance-inspired Christmas accessories in this post. ;)

The cushion ratio is more of a thing than I would have imagined. Of course, there are also those so-called "sofa sets", sometimes arranged in a corner formation, where the sofa has no back *except* that provided by an array of cushions, so an exception may be made for those. Don't like the look of them myself, I must say, not least because they must take a lot of re-plumping!

I agree tha it is ideal to be able to sit on a sofa first to test the comfort factor. I only managed to do that with one of my secondhand purchases, because I went to look at it at the owner's house first. The others were just bought on a 'hope for the best' basis. If you are like me you probably don't do much extended lounging anyway. ;)

5 (five!) sofas in one house? I didn't realize your house was that spacious!

In my lifetime, I bought 4 sofas (one of them was a sofa bed), none of them I owned at the same time. I also used a free... well, not exactly sofa but rather a sectional construction - we got it from relatives of a friend when we just arrived to the US and couldn't buy anything. We paid it forward, and 2 of the sofas we bought here found other homes for free before we bought the next one. I don't think the current one will go anywhere but a junk yard once Rusty is done with it.

Haha, one sofa is in a bedroom...I did say they were shoehorned in. ;)

Interesting to hear about your own sofa owning past: a sofa bed is something I have never bought but I really do see the value you could get from one.

LOL at the thought of Rusty laying waste to your current couch!