Another Bonkers Road Trip: from Boppard to Saint Gotthard, and Plopsaland to Piddlehinton 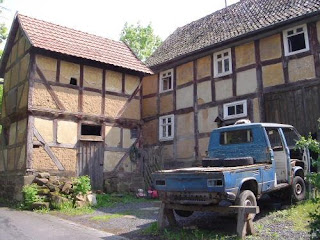 Okay, so that title was a bit of a mouthful, and I fully intended to put: "Part One - The Work Bit" or some such qualifier afterwards, but that might have subjected the title box to unreasonable pressure. And after all, the 4000+ mile itinerary was the motoring equivalent of a mouthful and a half, so an unwieldy title seems fitting.

I am still embroiled in the final phase of my project, but on the basis that a change is as good as a rest, thought I would get cracking on the trip report, starting with the non-perfume related aspects.

In terms of the travel itself, there was a lot of rural driving through sleepy villages, as well as the usual long motorway stretches. The hairiest moments occurred in the windy back streets of Soest, near Dortmund. I narrowly avoided colliding with a bus, which swerved abruptly to avoid another bus that had got itself wedged against a Ford Fiesta in a narrow lane. Right after I dodged the second bus, an old man fell into the road in front of my car, but luckily I spotted him in mid-teeter, and braked in time. 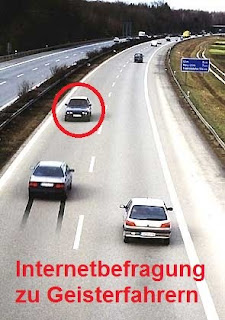 A more routine traffic phenomenon in Germany (and there are radio bulletins dedicated to this very subject) is the surprising number of dangerous obstacles on the motorway. These range from vehicular and other detritus (tyre shreddings, bumpers, planks of wood and bits of exhaust - for which the charming word in German is "Auspuff"), to farmyard animals, dogs, children playing, bicycles, and cars driving in the wrong direction (so-called "ghost drivers"). My favourite carriageway hazard this time has to be "people stopping to pick up parcels".

The Satnav was mostly a help, apart from the odd navigational equivalent of an epileptic fit to which it is prone - twice in fact in the same stretch of Autobahn near Moenchengladbach, where the dense motorway network caused the device to suffer a fatal bout of option anxiety, trapping me in another of its endless loops between two junctions on the A61.

Then again, I wasn't exactly a model motorist myself: I was caught by a speed camera in Germany and nearly got towed in Switzerland when I parked on the wrong side of the market square on a Friday. Towing would have been preferable I guess to the car being trampled underhoof by a herd of beribboned bell-wearing cattle.

On this trip I continued to notice subtle cultural differences. Small German children are not afraid to say hello to passing strangers. Ditto the knots of youths roaming the streets at night, where their British counterparts might swear, snigger or - if you are very unlucky - pull out a knife.

In France only the disabled toilet in a layby could be relied upon to have "above ground sanitary ware" as opposed to the Turkish, "Squat" style of facility.

German branches of Starbucks give you the choice of full fat milk, skimmed milk and condensed milk aka Kaffeesahne, in deference to the national preference for cream - even with tea.

Town halls in Germany offer a fax sending service to the public on a walk-up basis (for a fee!). Churches in certain parts of the Harz mountains are corrugated. 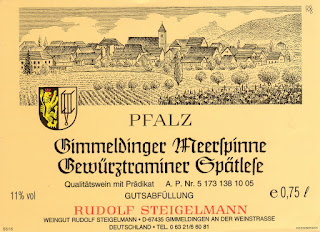 There were a few new experiences this time round: for example my first ever interview conducted in a garden. Every now and then I had to swipe small money spiders from the end of my nose, only to flick them inadvertently on to my respondent's face. And by a strange "quirk" of fate, I "quizzed" not one but two people with surnames beginning with "Q". This was also the first time a respondent has briefly climbed onto the desk and lain across it Odalisque-style (as he couldn't see something his colleague was working on further down the large conference table).

There were a couple of linguistic oddities that made me smile: the wine I drank on my birthday - GIMMELDINGER MEERSPINNE - and the translation in a corporate brochure of a flame resistant product as "flame retarded".

I also puzzled long and hard over a strange bit of advertising puffery on a road sign: "LOWER SAXONY - ALWAYS A GOOD IDEA". 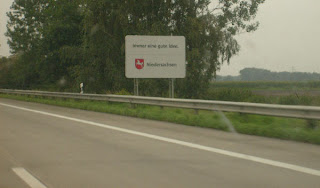 The weather went through every permutation over the four weeks: from 9 degrees with flurries of hail to 32 degrees and blazing sunshine. I wore almost every item of clothing I had brought with me, and even one or two I hadn't: for in the absence of socks, I improvised by wearing gloves on my feet during the colder nights.

On this trip I also visited former East Germany, which I could sum up in three words: "cheap", "cobblestoney" and "open". By "open" I mean that businesses ignored certain public holidays celebrated in the west and also didn't seem to close at lunchtime. So if you can remember not to wear heels in the streets of the Innenstadt, and aren't spooked by old water towers, the East is the place to be.

I could go on with my usual rant about creamy sauces and the ubiquity of asparagus at this time of year, but that is probably enough NOT about perfume to be going on with... I would just like to say RIP to my laptop (which died near Mannheim on 2nd June) and to the many insects of sundry nationalities who met an untimely end on my windscreen.

Yay! Great Post! And great to have got to see you and the Gals again.
I always thought the 'decorated cow parade' was a tourist thing, but in our little village the cows are indeed crowned with flowers, hung with bells and led out to their summer pastures.

Well, it certainly was an eventful trip. :) Can't wait to hear more.
And I'm late but happy birthday! :)

A most entertaining account...my heart leapt at the near-miss, and mourns your laptop, but I'm pretty sure it will be "Lower Saxony: Always a Good Idea" which haunts me with a chuckle (and a hint of wariness) for quite a while. ;)

Love the gloved feet; I do believe you may start a fashion trend with that one.

Thanks guys! I will report on the perfume related aspects of the trip soon, when it has cooled down a bit in my office.
: - )

This blog is great fun! I'm putting you in my bookmarks bar. :-)

Thanks, Haunani! I must confess it is a major reason why I have not been on Basenotes very much in the last nine months...that, and reading other people's blogs I have discovered since starting my own.

I'm still laughing about the poor old man who fell in the road! I mean, I know I shouldn't be laughing, I usually don't laugh when people fall down. But the image you described is just too funny! Oh I'm going to hell. Sigh.

It was a comedy moment, I can't deny it. Jolly good job I was going at a crawl speed, still shaken from the narrow squeak with the bus!

Hello FS! Late to this party but...here in good ol' Atlanta, Georgia, USA, the variety of objects in the road (and I mean our ring road, I-285, where if you're not doing 80 mph you'll get run over by a truck) is astounding. I mean Mattresses. So many that it's a sort of local joke. And Ladders -- ditto. Sofas. Took kits. A home made wooden platform with wheels on it, meant for working under a car, which I hit once -- in the center lane. And so on.

How funny about mattresses being such a frequent form of detritus on your road network. I remember a lot of HGV tyre shreddings in Florida - so much so that driving there was a bit of a slalom - but your collection of random objects takes the biscuit! The wooden platform on wheels is wonderfully obscure, though clearly a major menace in situ. I remember a lawnmower once in Germany, but Georgia is clearly the place to go to get the full set of highway flotsam and jetsam!

That tower was jolly creepy, I must say. That was its least sinister angle - well, I use the term "angle" loosely, obviously.