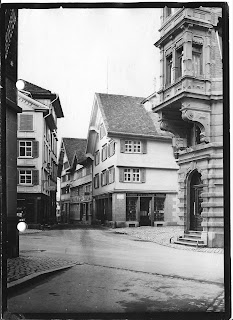 I have been back just over a week, and the scents on the blotters I keep finding at the bottom of handbags have long since become an indistinct blur. This actually matters less than you might think, as the perfume names I had scribbled on them were illegible from the off. But I reckon it is time I wrote up the perfume related aspects of from my recent travels - before the memories also become irretrievably fuzzy.

Mileagewise, this trip was 37% longer (in duration) and 48% longer (in distance) than the one in March, yet I seemed to have had less time to explore any perfume outlets that crossed my path. The extra miles covered may have had a lot to do with this, for on three occasions I spotted interesting perfume shops but made myself drive on by because I needed to be somewhere at a particular time. Should anyone be familiar with the Parfumeries in Stolberg, Erkelenz and Herisau (Switzerland) please tell me what I missed!

The few perfume outlets I did manage to visit - in shopping malls near Stuttgart and in former East Germany - barely left an impression: there seemed to be a disproportionate amount of Joop! and Bruno Banani, I do remember that. Well, that is not strictly fair: I did try out a few things that were new to me, for example the Chloe trio (Eau de Fleurs Neroli, Lavande and Capucine). The Neroli was too aggressive; I don't like lavender, and the Capucine was a sort of indeterminate green scent (with nasturtium!) That would explain my nose's complete inability to place it...

I also tried the new Dior Escale flanker a couple of times (Escale aux Marquises), and while I thought on first encounter that I might like it better than the previous two scents in the series - it lacked the sharp edge of Portofino and the overt herbiness of Pondichery - after prolonged wearing I decided it was rather odd: a sort of upmarket fruity floral marred by a faintly unpleasant note I couldn't quite put my finger on. Odd in the way Byredo's Bal d'Afrique is odd, but that is "good odd" and this was "bad odd" - a dubious accolade I would also award to Comme des Garcons' Daphne.

Okay, so far so unremarkable. After all, on my previous trip - as I later learnt - I managed to interest an online retailer, Parfumerie Nidderau, into stocking Kristiansand NYC. And here I was, over two weeks into the trip, having only tried a couple of Chloes, a Dior flanker and Lancome's Tresor In Love (which I wasn't even going to mention). 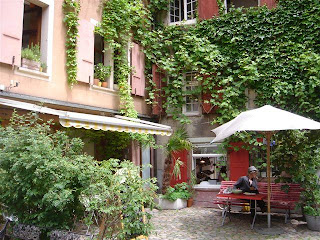 But things started to look up on 12th June, when I hooked up again with that cosmopolitan trio from Basenotes: Alicka61, Potiron and Wordbird. We agreed to meet in the Marktplatz in the centre of Basel, in exactly the same spot as back in March. This time, as it was the weekend, I was glad not to be suited and booted, or carrying a briefcase. 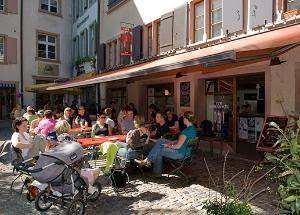 After a bit of excited chattering on the spot, we installed ourselves at an outside table attached to a quiet courtyard cafe recommended by Potiron: Der Rote Engel. The others ordered mouthwatering slabs of fruit tart, for which I inconveniently developed a major craving a couple of hours later, but I just felt like a cup of tea at the time. 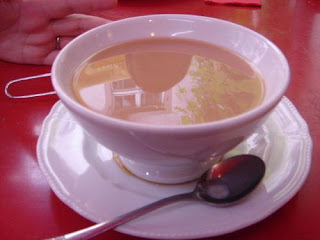 And what an impressive beverage it turned out to be! For it came in the largest cup I have ever seen in commercial use. Mr Bonkers' mother, who has a bit of a phobia about disproportionately large tableware, and who, on our way back from Bruges last year, famously complained in Costa Coffee at Watford Gap Services that the cup her tea was served in was unacceptably large, would have been outraged and totally spooked by this freak of the ceramics industry. (Wordbird kindly placed her hand in the shot to give you a sense of scale.)

Then it wasn't long before we did that "upending of the handbag" trick and samples poured out on to the table. Wordbird was even looking for a new home for half a bottle of a natural floral perfume I had not heard of before. She kindly gave me a selection of Possets' perfumes, one of those kooky indie brands I had been curious about. (I will test and report on them in due course.) I have already sneaked a trial of the whimsically named Ghost Fart, and am bracing myself to try the rest!

After this pitstop - and given that we had loitered last time (without making a single purchase between us) in the niche perfumery Hyazinth for an indecently long time - none of us felt bold enough to return so soon, and instead checked out the perfume section in Globus, Basel's high end department store. I didn't spot any new launches, but we all found scents that were new to us - whole swathes of the Acqua di Parma or Bond No 9 ranges, for example, plus the odd Prada, Marc Jacobs or Etro. I gave Annick Goutal's Ninfeo Mio its fourth or fifth trial but my original verdict still stands: way too sharp!! 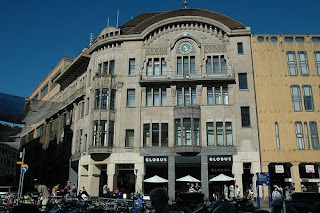 From Globus (having said goodbye to Alicka61, who had to head home at this point) we went to Import Parfumerie and had a very satisfying scavenge in their bargain bins. These were crammed with deeply discounted perfumes - some to as little as 10 or 15 euros (a steal for Switzerland!) - but most of them were not on my radar and for the most part looked like Swiss equivalents of Elizabeth Arden's Red Door and things in that vein.

I thought I had found a true bargain in a 30 SFRS bottle of DSQUARED She Wood, only to discover that it was the body lotion. But let me not downplay the thrill of the rummage, which was considerable, and enhanced by Wordbird's helpful commentary about the general style of different brands. 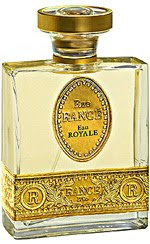 By now my stomach was rumbling, so we popped into an Italian cafe (another Potiron haunt) and ordered freshly made paninis, and in my case a cup of tea served in a receptacle of conventional dimensions. Our energy levels restored, we hit Douglas, where I made a purchase! (Two metal decanting funnels for 2 SFRS apiece, which struck me as pretty good value.) And Wordbird's more substantial purchase of a small Steiff bear bought us some more valuable "loitering time".

In Douglas I used my prime skin sites to retry Rance Eau Royale (fresh, foresty) and Laetitia (woodier than I remembered, doubtless due to the heat). My first trial of Guerlain's Flora Nymphea was a nondescript disappointment on skin - I had expected some kind of honeyed beauty like Chanel Beige. I also sampled DSQUARED Crystal Creek Wood (intrigued by the blue colour of the juice), and found it a pleasant, vaguely aquatic number, just as you would expect.

After Douglas and a mosey round a nearby shoe store (some interesting Camper-esque styles here and there, but with prices to match, sadly!), Potiron suggested taking a ferry ride across the Rhine. It lasted all of 3 minutes, but it was fun to look back at the city skylines on from the water. On the other side of the river we wandered along the tree-lined promenade bordering Klein-Basel, before stopping for a beer within the grounds of a former army barracks (now a green area fringed with cafes, bars and an arts venue). We were dimly aware of the early English goal against the USA in the bar next door (it has been downhill ever since!), and before we knew it it was getting cold and dark and time to accompany Wordbird to the railway station. Potiron and I rounded off the night with an Italian meal, and it was after 11pm when we went our separate ways at a tram stop near the centre.

Summing up, it was fantastic to see everyone again, and this meeting further cemented our international friendship. To the point where - while perfume will always be the interest that first united us, and we will probably brave Parfumerie Hyazinth again one day - I think we could have just as much fun next time hitting the shoe shops instead.
Posted by Vanessa at 19:40

OH, thanks so much for the virtual hangout with like-minded folks! I envy you this lovely day, in a good-natured way, of course, and wish you many more!

You are a very lucky woman!

I am fortunate that my job involves as much travel as it does. And if I ever get a project in North America again, the dot-joining potential between American and Canadian perfumistas would be huge!

the phobia of large cups really really made me laugh!!

Rose, you should have seen that cup - it was immense! It would give most bowls a run for their money. : - )

Oh that cup sounds fantastic! I should send you a pic of the mug I drink my tea out of every morning....remind me! It was a bit disconcerting to note that your cup seemed handle-less...what if you had just applied hand cream!

Now as for the Chloes, it's a shame you didn't try the Eau de Lavande. I'm not a huge lavender fan either, but I found this sophisticated and smooth. Agree with you on the other two ;-)

Yes, I do believe it was handleless - and I would be interested to see your mug. Meanwhile, I am enjoying the one you gave me. : - )

I did try the Chloe Lavande actually, and it was as you say a smooth rendition of the note, but just not my thing.