My Bonkers Birthday Card From Moonpig's "Scent To You" Range 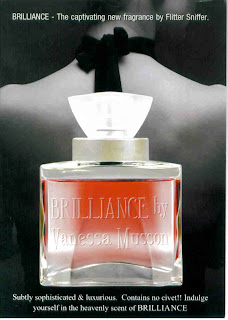 Well, I am just back from the Bonkers Road Trip (4207 miles aka a more metrically impressive 6731 km), but sadly facing a completely bonkers work deadline. As a result, it may be a little while yet before I can report properly on my latest overseas adventures, including the reunion of the Ladies of Switzerland (Resident and Visiting).

So I thought I would do a quick post about one of my birthday cards instead. The actual day was nearly four weeks ago, and I spent it interviewing a manufacturer of hydraulic and pneumatic seals, so it was only last night that I caught up with the bulk of my birthday post, including this rather splendid custom-made Moonpig one. (All the images may be enlarged by clicking on them.)

There are 12 different designs on the theme of perfume in the Moonpig catalogue, some of them rather crass and risque, such as the ones featuring women's fragrances named "Foxy", "Insatiable" and "Pornographique"(!). The men's card templates are not much better, with several scantily clad male models prominently displayed. By contrast, my friend chose a very tasteful and aesthetic option, added her own personalised text, and created the perfect greetings card for a fumehead - indeed I would go so far as to say that it is a present in its own right! 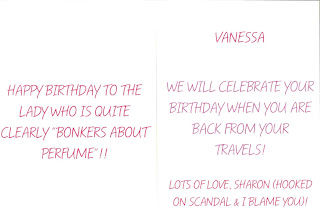 Receiving such an apt card made me aware of how few there are out there in outlets like W H Smiths, Clinton Cards etc that are targeted at lovers of perfume. Motifs of sailing boats, cup cakes, red wine bottles, Venetian canals, handbags, shoes, Japanese bird etchings, butterflies and even sock monkeys abound, but perfume bottles are virtually nowhere to be seen. 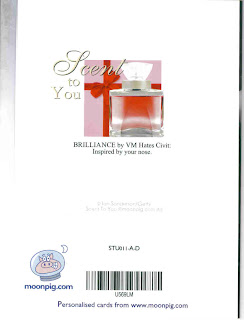 NB "VM Hates Civit" is an approximation and slight misspelling of my other screen name...
: - )

So there we go - another market opportunity joins the calendar idea that...er... is still languishing on the drawing board!

PS "Scandal" is not an allusion to the scurrilous content of gossip magazines, but refers to the scent by Roja Dove, to which I introduced my friend, and of which she is now the proud owner (albeit some £125 lighter!)
Posted by Vanessa at 20:54

What a wonderful gift! Had never heard of such a sit but isn't it fabulous what you can find on the net these days??? :-)

Glad that you're back! Looking forward to more posts soon.

So you spent a good portion of your personal anniversary discussing hydraulics and pneumatic seats? Am I really supposed to resist a chuckle and a silly comment?

There. I have resisted. A gift from across the sea. ;)

However, I will say that I am happy for your friend that you introduced some Scandal into her life.

happy birthday, belated!! so good to hear from you!!!

Thanks, guys! I hope normal service will be resumed shortly. To quote another of my birthday cards:

"It was a nuisance call from her boss telling her to do some work."