"Lord Mandelson Creates His Own Perfume" 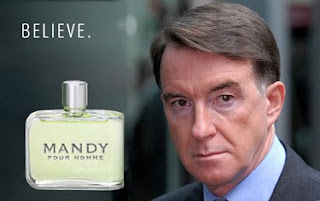 The release of former Cabinet Minister Lord Peter Mandelson's much awaited autobiography, "The Third Man", has has sent shock waves rippling through UK political circles. This is a no-holds-barred insider account of spin and plotting, of frustrated ambition, hissy fits and general skullduggery in the corridors of power, in which his troubled triangular relationship with Tony Blair and Gordon Brown is painfully laid bare.

And now, according to Newsbiscuit, the satirical current affairs "ezine", Lord Mandelson has allegedly released his own perfume, MANDY, which - even more than Roja Dove's creation - will truly capture the scent of scandal...

You don't have to be remotely familiar with the UK political scene to find this article an utter delight! Read it here.

Photo image from Newsbiscuit.
Posted by Vanessa at 12:24

so Mandy is Grenouille's magic juice!? ;)

The name Mandy alone is HILARIOUS!!!

This is so funny!

hilarious! I absolutely loved this

Isn't it a joy! The bit about "malignant narcissism" totally cracked me up...