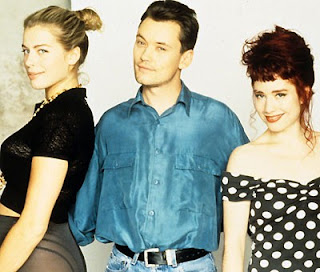 Apologies in advance for the obscure nature of this post, which may only be meaningful to British readers of a certain age - and quite possibly only to a subset of those. : - )

At the heart of the story is the concept of "Six Degrees of Separation", which has always fascinated me, not least because its first proponent rejoices in the name of Frigyes Karinthy. Wikipedia gives a neat summary:

"Six degrees of separation (also referred to as the 'Human Web') refers to the idea that everyone is at most six steps away from any other person on Earth, so that a chain of 'a friend of a friend' statements can be made to connect any two people in six steps or fewer." 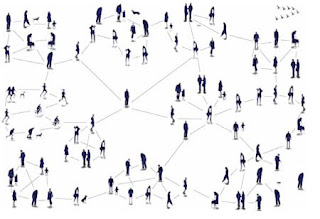 As the following story illustrates, certain media personalities may only be a single step away...

Mr Bonkers - as you may have gathered from our guitar collecting mission to London last April - is a professional musician, and plays electric bass with a variety of bands, most notably Roy Wood's Rock 'n' Roll Band. (For anyone not familiar with Roy Wood, this famously bearded singer songwriter is perhaps best known for his involvement in '60s and '70s bands The Move, The Electric Light Orchestra and Wizzard.) 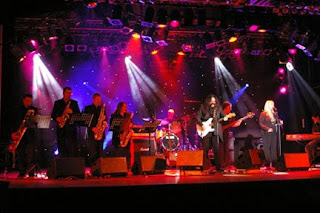 Last month Roy Wood headlined at Stockport Rugby Club, near Manchester. Also on the bill were The Rubettes (another pop act I remember well from the '70s), a Beatles tribute band, and local DJ Mike Sweeney.

After the gig, everyone was unwinding with a few drinks when Terry Christian (who had attended the concert) appeared backstage, and was introduced to Roy Wood and the other members of the band. By way of background, in the 1980s Terry Christian was a music promoter and band manager who went on to become a journalist, radio presenter and TV host. The TV show for which he is most famous was The Word, which Wikipedia describes as "a mayhemic mixture of pop music and teen attitude". It ran for five years in the 1990s, and reportedly attracted up to a 49% share of the viewing public in its Friday night slot.

"The magazine format allowed for interviews, live music, features and even game shows. The flexible late-night format meant that guests could do just about anything to be controversial.

There was also an 'I'll do anything to be on television' section called 'The Hopefuls' in which people ate worms, bathed in maggots, licked sweat off fat people, and did generally repulsive things in order to get featured on the programme." 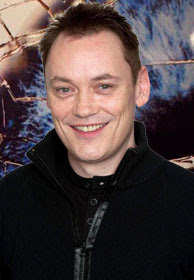 But of more, much more interest than the worm-eating and maggot-clad contestants is the fact that one of Terry Christian's co-presenters was none other than KATIE PUCKRIK...

The initial introductions over, it wasn't long before the other musicians drifted off to get changed and Mr Bonkers found himself alone with Terry, propping up the free bar. The conversation immediately turned to important matters such as the World Cup and Terry's recent stint on the radio show TalkSPORT. They also talked about his appearance on Celebrity Big Brother last year.

And then the subject of The Word came up, and Mr B asked if Terry was still in touch with Katie Puckrik. And before they knew it, the pair were discussing Katie's new career in perfume, and Mr B mentioned that his girlfriend was also one of those fanatical fumeheads, that I followed Katie's blog, and had exchanged a couple of emails with her (in connection with a hard-to-find scent by Les Parfums du Soleil). 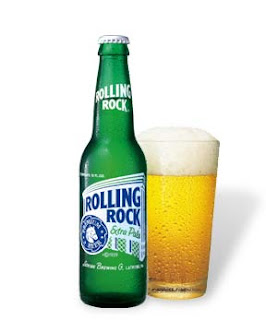 When I heard this account, I couldn't help thinking how incongruous it was that two straight-talking northern blokes, drawn from different walks of the music business, should be sharing a beer in a rugby club on a Saturday night, and end up talking about Katie Puckrik and me, their parallel perfumista pals...

I can in fact add a further strand to this "human rectangle" linking Mr Bonkers, Terry C, Katie P and me, for I once spotted Terry in a payphone at Euston station, presumably before the days of mobile phones. He was talking very animatedly in his unmistakable Lancashire accent. Little did I imagine back then, as I shuffled impatiently from foot to foot jangling my change, that his path would randomly cross mine some twenty years later, as part of an even more complex set of connections... 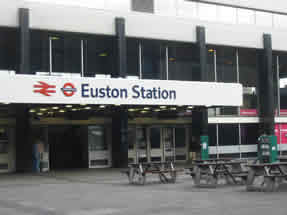 (PS The reference to Rolling Rock may be erroneous, but a little poetic licence was called for in the interests of alliteration and general symmetry.)

Photo of Amanda de Cadanet, Terry Christian and Katie Puckrik on The Word from MSN TV
Photo of Roy Wood's Rock 'n' Roll Band from the band's website
Illustration of the principle of Six Degrees of Separation from clever-linking.net
Photo of Terry Christian on Celebrity Big Brother from the show's website.
Posted by Vanessa at 09:11

It was quite surreal for him, for sure!

Every once in a while I get surprised all over again about the fact that our world is such a small place. :)
Katie looks really young on that picture. If you haven't said it was here, I wouldn't have realized it myself.

Rolling Rock was a cheap favorite of my father's...my father was once on the Ted Mack Amateur Hour...I considered stopping at the Rock and Roll Hall of Fame on my recent "tour" of the northeast in my own country...I'm going to applaud the reach for the green bottle. And register my amusement at your tale.

I await the sequel, wherein you find yourself with a MAJOR scrubber, using Survivor-like tactics to make it through the day and consulting Terry for assistance. ;)

Good heavens, a *phone booth*?? Careful, now...there's a reference that's getting lost further and further to the mist on a monthly basis...

I guess Katie would have been quite young - mid-20s maybe? It was all a long time ago!

Interesting to hear about your dad's TV appearance and beer predilections. The Rock and Roll Hall of Fame sounds like a fun place to visit! I note that it is in Cleveland - I have been to the city a number of times and failed to clock this, though I did once stay downtown at the same hotel as Simple Minds in 1984.

Men discussing perfumes is weird, but nice, for sure. Mind you, I am sure they didn't dwell on it longer than necessary!

Bonkers (and all) - if ever you're in Cleveland, please let me know - and I may have been hanging out in that hotel bar in 1984 (was it Swingoes?)

Ah, the name is sadly lost in the mists of time along with the concept of phone booths, even though I still have my diary from that year - I only refer to where we stayed as "the hotel"! It did have a pool and I seem to eat a lot at somewhere called Rascal House - I wonder if that might be nearby?

hahaa, yep that was it! I spent too much time back then at the Rascal House - they used to have $1.00 shot and beer (ouch!) and that 'new' thing called music videos!

So if Rascal House was the one on Euclid, am wondering if we stayed at the Marriott, which has a pool? There must be a finite number of hotels with pools within staggering distance of that particular branch of RH! : - )

oh gees, you're probably right - Swingos was quite a dump and didn't have a pool. But I'm thinking we probably passed on another at some point!

Very possibly! - I was there for a fortnight as a student, attending lectures at the university as part of an exchange programme.

Flittersniffer, I've just stumbled across this post, and am experiencing 6 Degrees of Separation fireworks. Or at least the frisson of coincidences. One being that you posted this on my birthday. Another being that Terry Christian actually knows a thing or 2 about perfume, because one of his brothers runs an online fragrance business. Third is your mention of Roy Wood and The Move, because my buddies Sparks (the band whose song "Perfume" is my KatiePuckrikSmells theme tune on YouTube) adore him, and his work was a huge inspiration for them when they were starting out.

Ahh, I love that photo of Amanda de Cadenet, Terry and me. We were all so fresh faced! And dig how pregnant Amanda was wearing see-thru lingerie - au courant, fashion-wise...as it is again!

Oh, and Terry would be scandalized at having his accent attributed to Lancashire - he's from Manchester!

Thanks for stopping by in your important capacity as the fourth corner of this curious human rectangle. : - )

I showed your comment to Mr Bonkers, who NOW remembers Terry bringing up his brother's perfume business during their conversation. Men...I don't know, half a story!

I loved Sparks as a kid, but had no idea they were inspired by Roy Wood. Another spooky coincidence worthy of mention perhaps is the fact that "Flowers in the rain" was the first 45 Mr B bought with his pocket money as a lad of eight. Little did he know that some 30 years later, he would be playing bass in Roy Wood's band...

Apologies to Terry for wrongly attributing his accent to the surrounding area. Time to get out the atlas!