Fragrance Blotters And Other Absorbing Matters 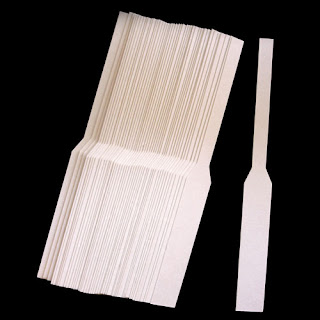 Regular readers of Bonkers know that I am much exercised by issues of perfume storage in all its aspects. I worry about condensation and heat, about leaky decants and warped boxes. Well, this week I have mostly been worrying about keeping my....paper whatya-ma-call-its separate. I can't believe I have been a perfumista-type person for more than two and a half years, yet until today I wasn't sure of the correct term for those paper tester strips you spray perfumes on in shops to try them. Yes, I have been mightily confused on this point, and some extensive googling has thrown up a bunch of alternatives, all with equal currency as far as I can tell:

I also found one or two mentions each of "perfume test blotter", perfume blotter", "fragrance strip blotter" and "touche à sentir" and "mouillette", though the latter two are of course French phrases not in general use over here - except possibly in very chichi circles. And what these things are NOT called are "fragrance strips" or "scent strips" - I can confirm that both terms refer specifically to those peel off flaps in women's magazines which are impregnated with a scent.

But come on...do you refer to these small, thin absorbent lengths of card - because they are more the gauge of card than paper, and of course sometimes they can be square (Chanel) or oblong - as "fragrance blotters", or even "smelling strips"? The very first phrase I came up with when I sat down to think what I do call them is "perfume tester strips", and that didn't come up anywhere in my Internet research. Terms like "fragrance blotter" and its ilk are simply not top of mind for me. Indeed, I would be more likely to use a roundabout locution, along the lines of: "Excuse me, have you got one of those paper strip thingies I can spray this perfume tester on, please?" But that may just be me...

Mind you, based on a cursory trawl of common search terms thrown up by Google Keyword Tool, it would seem that the public at large shares my uncertainty. In fairness, there were 91 global monthly searches for "smelling strip", but crucially NONE for "fragrance blotter", "scent blotter" or "perfume blotter".

Out of interest, I put the word "mouillette" into Linguee, an online dictionary, and it gave me this translation:

So, you see, the Linguee people are not making any assumptions either about the public having especially high levels of blotter awareness.

Going back to the Google keyword searches, I suppose you might not expect anyone to be looking for these things at all, as they are usually provided in-store. Even on the swap scene, while a perfume swapper might routinely purchase decanting supplies, there is no obvious need to purchase blotters for home use. 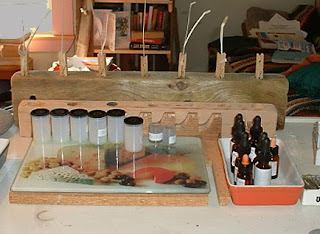 But....and this is a big but....I think I have identified a gap in the market for retail sales of blotter HOLDERS. By this I don't mean the devices known in French as "porte-mouillettes", certain designs of which resemble the smelling strip equivalent of a kitchen knife block. And I certainly don't mean this curious homemade contraption fashioned out of clothes pegs.

No, I mean the little greaseproof?/tracing? paper bags/holders that I was once offered in a branch of L'Artisan Parfumeur in Paris to slip my smelling strips in. The idea is that they preserve the scent for longer and also keep the strips from cross-contaminating one another at the bottom of your handbag, which is the place the strips inevitably end up getting tossed when I go on a serious sniffing outing. 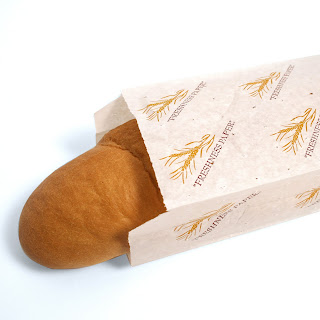 Now at the Roja Dove master class last year - about which I may do a retrospective post some time - one of my suggestions for improving the session was the provision of just such bags, in which to keep the strips Roja circulated of his semi-bespoke range. For these are very rare and special scents, and we all wanted to preserve our tester strips for as long as chemically possible, knowing that we were unlikely to encounter them again. But apart from that one L'Artisan store, I don't remember ever seeing such bags anywhere else.

That said, the principle of the protective bag is perfectly commonplace for other products - that is how you buy a French stick in the supermarket, for example. And let's face it, you're not even likely to have a load of loaves knocking about at the bottom of your handbag. And then you've got things like these eye shadow applicators, which come in an articulated plastic case with a slot for each sponge, a bit like an ammo belt.

Whilst separate bags would work fine, a single holder with compartments for each would be an ideal way to keep all the strips in one place for ease of reference. I also checked out artists' pastel boxes and screw organisers, but the compartments were not long or shallow enough. So the perfect "smelling strip organiser" continues to elude me.

Meanwhile, however, I tracked down a French supplier of "touches à sentir" to L'Artisan Parfumeur, and gave them a call. The first thing I wanted to confirm was the name for these individual test strip holders and it is "étui en papier cristal" or "étui cristal" for short. Predictably, these things are not sold in retail outlets, but only to perfume companies, though the chap I spoke to would have cut me a deal on 500 for 250-300 euros. Why, that is about 45p each! Gallic robdoggery of the first water! 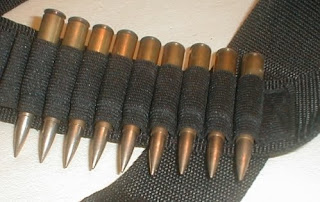 So the search for a suitable "touchebag" - or bags - continues. :- ) And meanwhile, I have got a whole bunch of smelling strips stuck between the leaves of a plain notebook and I am hoping for the best.

Wow, I've never kept the blotter strips, but I can see where you would want to for something rare. Maybe something like a little photo album, with the plastic pockets?

I'm still trying to figure out how to keep my testers. I have them in ziplock baggies, labelled and organized alphaetically in a bin, but I worry about leakage, since they don't stay upright that way.

A photo album might be worth exploring, while such things still exist in our increasingly digital age!

And see, you said "blotter strips", quite unprompted. That is yet another variation to add to the pot...

When I refer to them, I call them 'touches', like the French. Does that make ma a bit wanky and full of myself? Oh dear. Hope not. Though generally, I don't refer to them. Small calls them 'papers', but that makes me think of Rizzlas and my mis-spent youth.

And if they're neither hideous nor rare, I use them as bookmarks, quite a lot. It makes my books smell nice.

Not at all - it would only make you a bit wanky and full of yourself if you were living in Swindon, not Switzerland. Where you are, it just makes you sound like the European expat melting pot person you are! : - )

Right, I'm adding Small's "papers" to the blotter lexicon, though I agree that it has connotations or roll-ups and "wraps" of the non-floury tortilla variety.

I guess if nothing comes of my other storage solutions, I could take a leaf out of your book and do more reading...!

I call them "paper testers", and store them in the relevant page of my Turin/Sanchez guide.

Hmmm. Interesting food for thought - and some creative ideas for storage!

Thanks, but I sense the perfect solution is still out there!

I suppose my two names are "testing strip" or "thingie". :)

As for storing them, I'm wondering if something in the stamp collecting world might work. A stock book, for example, would at least let you slip them in and probably keep them from touching each other, but they'd still be in the same airspace and touching the stockbook page. Hmmm.

See - neither "testing strip" nor "thingie" are received terminology either!

Thanks for the philatelic suggestion. It may involve the same airspace issue that I have with my blank notebook, but in this case there are snug pockets to keep the strips secure and visible. And the "double glassine interleaves" could just be the clincher...

Perfume test strips. That's what my brain says before I get caught in the linguistic research/pondering muddle.

You know, of course, that I enjoyed this rumination very much. Food for thought. Chewed on it for a while.

Chicken Freak already got to the philatec option; I remember those "glassine envelopes" quite well, as my father collected stamps in my youth, and my first thought for your storage issue was also of them. I think a narrow version would work quite well. I remember being quite fascinated by all the sizes, for singles, blocks, strips, entire envelopes, etc etc etc.

(I cheated there with punctuation. Not conscious, just lazy. I knew you would notice. You're welcome.)

Anyway, other than glassines...what I have done is slip them between pages of a small notebook. I always have at least one small notebook with me. For a while there, I had a *perfume-specific* small notebook, and it, and decanting supplies, with me at all times. I've relaxed somewhat since then, but all's I'm saying is...the notebook thing worked as an easy-access low-budget solution.

Have I mentioned how much I love notebooks?....

There you go - "perfume test strips" is not an official term either. There may be no one out there off whose tongue "fragrance blotter" routinely trips.

And that's another vote for stamp stock books. I have a very good feeling about those glassine envelopes, especially the narrow gauge ones. Will definitely pursue this idea, and meanwhile I will continue to use the plain notebook, which I note you also favour as an easy-access expedient. : - )

Just found this post while doing a search for "fragrance test strips". Have you thought about storing the strips in glassine envelopes (the waxy translucent envelopes that postage stamps used to come in here in the United States)

Yes - I have now followed this advice, which one or two other people also mentioned.