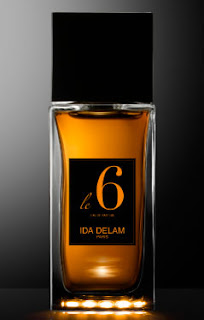 Ida is not a common name. When I was a kid, I knew a farmer's wife in Co Down called Ida Thompson, and in perfume circles there is of course Cafleurebon's Senior Editor, Ida Meister (known to many by her screen name, Chayaruchama). But those were the only two Idas I had come across, if we exclude the Hindu goddess, and sundry sacred mountains in Greece and Turkey.

Until, that is, lovethescents sent me a sample of Ida Delam Le 6 as an extra in a swap. This third Ida is the founder of a spa called Le Six, located (quite properly) in the 6e arrondissement of Paris. She has a quirky, primitive logo, that looks rather like a sixth eye, and one of those irritating animated websites with an arthouse film intro, on which you click furiously in a futile attempt to skip it. I never did manage to bring up the perfume page, but I doubt I am missing much, for the website seems heavy on mood creation and light on information. 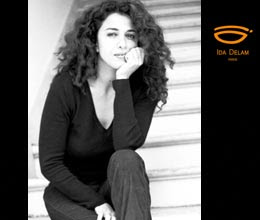 Of more interest perhaps is this video, which gives us a bit of a clue about the intended positioning of the scent. Extra bonus points for anyone who can identify the precise game involved. Not roulette, rummy or fruit machines is all I could say with confidence. Check it out HERE.

What I take from the video is that the wearer of Le 6 perfume is a risk taker: she gambles, she wears a top hat, despite the very real risk of being mistaken for a bunny girl, and she walks home alone late at night. She also appears to throw her winnings away (assuming those are chips and not a useless jigsaw with some pieces missing). This suggests a complete detachment to material wealth or a supreme confidence in her ability to win her discarded winnings back again. My money's on the latter.

Okay, so.... based on the video do you feel an affinity with this top hatted totty target wearer? Please all form an orderly queue, while I dredge up any other sketchy info on Ida Delam Le 6... 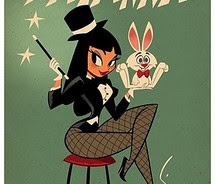 According to The Scented Salamander, who seems to be one of the very few perfume blogs to have featured this scent, Le 6 was inspired by "the personal fantasy of the soul of Gabrielle Chanel having crossed Delam's path one day". Pardon? I don't know about you, but bumping into Coco Chanel is not high on the list of my fantasies... I am not even terribly bothered about meeting Keira Knightley.

And as for the scent itself, it is apparently a "a wink at or homage to" Chanel No 5. So what we have here basically is a self-possessed, A-type gambling bunny girl with classic perfume tastes. Personally I am not convinced that the girl in the video would aspire to wear a perfume as iconic yet conventional as No 5. I see her more in the likes of Armani Code - something she would perceive as mysterious and slutty based on the TV ads - but which the perfume community (or me, anyway!) might dismiss as just another cheap, synthetic take on orange blossom. 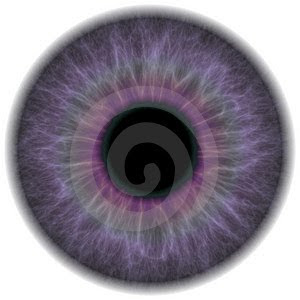 Having sampled Ida Delam Le 6 on 3-4 occasions, I can't say that I see much of a resemblance to No 5 - and the notes are very different too, so as winks go, I'd say it's more of a barely perceptible twitch:

Both fragrances have iris, violet and musk, and - crucially - both have an unpleasant opening. In the case of Love in Black, this has been described in reviews as a "tarry note", which I'd go along with. The opening of Le 6 is more like a musty violet-scented patchouli, even though I see no patchouli listed. But "dirty" or "musty" is the overriding impression. Fortunately, both scents get appreciably better as they develop, but I can't help wondering why perfumers make scents that get off to such a disagreeable start - if indeed they do so by choice. Is it a non-negotiable characteristic of iris (known for its rootiness, which for all I know may be the half-sibling of mustiness)? Ah, but not all iris scents have a nasty opening, so it cannot be iris per se, though iris and violet together may be unhappy bedfellows, or at least until they have got into their stride... 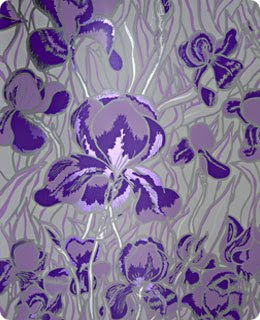 Thinking about it, there are quite a few other perfumes I like a lot, except for their musty and/or medicinal top notes eg Strange Invisible Perfumes Magazine Street, Damien Bash Lucifer #3 and Parfumerie Générale L'Ombre Fauve. Why can't the perfumers sort out the openings of those otherwise great scents? After all, you wouldn't invite guests to a dinner party and line them up against a wall and whip them savagely, before offering round the sherry and the salted nuts as if nothing had happened? Well, not at any normal kind of dinner party, you wouldn't. Does the perfumer think we will appreciate the rest of his/her creation disproportionately if the top notes are downright horrid - ie the olfactory equivalent of beating your head against a brick wall - because "it's so nice when you stop". That remains my working theory until I learn otherwise.

And certainly the latter stages of Le 6 are very enjoyable - a soft, musky, iris-violet accord, warmed by a hint of amber in the base: rich without being heavy or cloying, and neither noticeably powdery nor sweet.

Ida Delam Le 6 isn't strange enough to warrant inclusion in the "Weird Waft Series", but it IS "difficult" and involves "work". And as with my day job, sometimes I am in the mood for grafting, while at other times I fantasise about winning the lottery. And just occasionally I have even bought a ticket, which is a bit of a prerequisite, I suppose. Hmmm...next time there's a rollover, I really should try the top hat too...

I'm so pleased you've been enjoying it. I also didn't care for the opening, but everything that follows it, makes it worth it. You do bring up a good point: why can't certain fragrances open as well as they close?

I don't mind a difficult opening...we've referenced the opening of SIP Black Rosette, which to this day I am not sure that I like, but am certainly fascinated by. Repelled a little bit, even. And yet, intrigued.

I don't think I'm a masochist; I'll run screaming from an aldehyde or a cloying white flower. But I have to admit, there are perfumes with openings that I could without too much trouble call "difficult," but I enjoy. Silences' opening, for example, puzzled me at first. And No. 19 threatened to slap me silly. But both are now loves.

Like I said, I don't think I've a fetish. I came to love those, and yet not others. Why one should be a rewarding challenge, and another perfume an annoyance, is not always clear. You raise an interesting point...but I'm still ruminating.

Oh, and L'Ombre Fauve is such a happy place, it's one of the reasons I embrace when autumn arrives. ;)

I am grateful to you for the heads up about Ida Delam Le 6 - it is worth the work, though I wouldn't say that of every scent with a weird opening!

You seem to share my general stance on "difficult" scents: interesting to learn which styles you find most repellent and a "challenge" too far!

Ah, so glad you share my love of L'Ombre Fauve... A bestial shadow I also like to lurk in in the autumn.