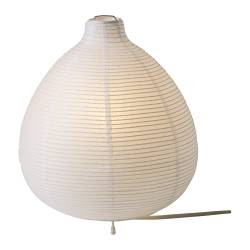 Last Friday I took Mr Bonkers' mother to IKEA: partly because I feel everyone should go at least once in their life to this Scandinavian temple of budget chic, and partly to buy a mirror. In the event, I also came away with two bedside lamps for the spare room - of that globular paper kind that has been in vogue ever since the 70s, or such is my hope. Mr Bonkers greeted their arrival with dark mutterings, dismissing them as "studenty" and "cheap", which I took to be a kneejerk reaction to the fact that he had not been consulted in a home furnishings purchase. Now that they are erected, and emitting that cosy, dull glow characteristic of the new energy saving bulbs which have supplanted the old incandescent variety, Mr B has conceded that they are "better than what was there before", namely ripped paper shades of a flower pot shape, but otherwise similar construction and quality. 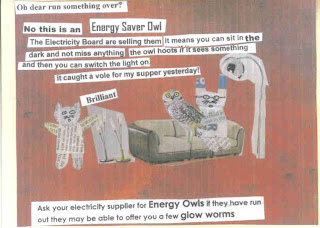 The lamp buying trip put me in mind of a birthday card I received this year on an energy saving theme. In case the text is hard to make out, the basic premise is that you sit in your living room in the dark, but with an Energy Saver Owl on hand to hoot if it sees something, whereupon you can switch the light back on for a brief moment to attend to whatever it is. The card goes on to mention that glow worms may also be available from your electricity supplier.

And glow worms reminded me in turn of a summer holiday in France just after my final exams at university. The evening I heard about my results, a former Mr Bonkers and I were walking along a country lane at night, marvelling at the myriads of glow worms by the road side. "Since you did so well", he remarked, "if I ask them nicely they might put on an extra bar for you..." 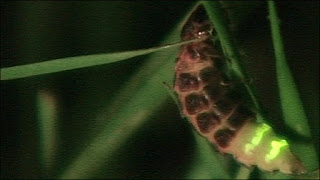 And all this talk of glowing in the dark leads me ineluctably to perfume (at last!), to wit - to give it its full title - Jennifer Lopez Glow after Dark by J-Lo. Thanks to lovethescents for the purse size roll-on of this. I am not familiar with the whole "Glow" line by J-Lo, indeed I only really know Deseo, which I like and own. Glow after Dark is in fact the fourth in the series after Glow, Miami Glow and Love at First Glow. She is clearly on a major luminaire kick here...

I would not say this is a great scent, for it smells a bit synthetic and generic - quite musky (fine) and possibly fruity (less fine) - but as celebrity scents go, it is fairly understated and I could just about see myself wearing it occasionally. For the first time yesterday I actually googled the notes, and was dismayed to confirm the presence of several kinds of fruit - including two about which I am most snobby, namely cherry and passion fruit. For some reason I have it in for peony as well - probably owing to their relentless ubiquity in Stella flankers. And I'd be lying if I didn't say that the respective qualification of the musk and woods as "pink" and "blonde" also troubles me. 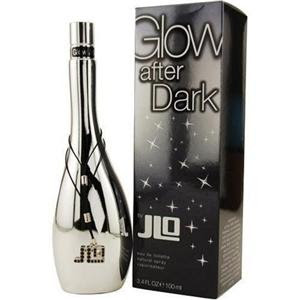 Yes, I would like this fragrance more if I didn't know what was in it, that's for sure. But let us not forget the energy saving potential of Glow after Dark. The advertising campaign billed it as “wild. sexy. breathless.”, which is okay as far as it goes, but of much more interest to today's thrifty and ecologically minded consumer is its radiant power, although the exact wattage isn't stated on the label. I wore it all day yesterday - right up until bedtime - and Mr Bonkers and I didn't feel the need to put the light on once. The owl was hooting its head off, mind, and the glow worm on the mantlepiece was on full beam, but they were probably just miffed at being sidelined.


Photo of lamp from IKEA website, card by Sue Cathcart, photo of a glow worm from the BBC website, photo of Glow after Dark from Google images.
Posted by Vanessa at 10:17

Not a fan of that JLo which is why I'm glad you find it semi-wearable, after all. In terms of the Glow range, I really prefer the original, although I don't remember the last time I reached for it.

As for your lamp, a bit too New Age-y for this girl, I'm afraid. It should be perfect for the guest room, though ;-)

I must try the original Glow when I am next in Boots - don't know how the rest of the line has managed to pass me by.

I know what you mean about the lamps - they were an emergency purchase in anticipation of imminent visitors. I think you would like the ones in the main bedroom - they have a tall, cylindrical base in mahogany and brushed steel, with cream shades.

I haven't tried Deseo, but have read good things about it. There are so many Glow flankers that they now seem a little trashy, for lack of a better description. How many versions of Glow can there really be?

Still, I'm digging the retro lamps. And your new background. What happened to the travel vibe?

Here in Bristol there is a family run ice-cream business - Tarr's. Glow After Dark smells exactly like their Cider apple ice lollies. Which is definitely a weird smell :)

I think too many flankers of anything is not a good thing, especially when they have such similar names. I was even moved to write a post a while back on "Confusing Stella Flankers".

Re the background, this design is also from the Blogger Travel selection, as it happens. I lost the blue skies one as there was a report from a reader viewing in wide screen of "distraction activity" by low flying aircraft . : - )

Gosh, I remember cider apple ice lollies too - though not that brand, obviously. But am darned if I can remember exactly how they smelt! They tasted quite nice though, I think.

I would like to try this fragrance I love it good that you shared this.