The Bonkers Rail Trip: Part One - The Travel Bit 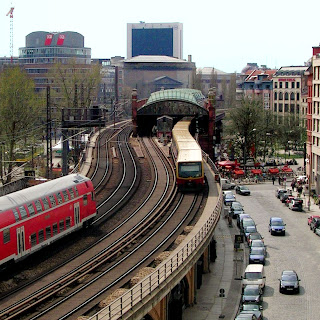 When I went away last weekend, I thought I might have overcooked things again (as is my wont) with the title of my last post, for a train trip between Frankfurt and Berlin sounds on the face of it like a fairly sedate exercise. This was to be supplemented by a little light pootling around these cities on public transport to get to my appointments, which were all with nursing and procurement staff at hospitals.

Light pootling? An utterly bonkers and borderline impossible multimodal trip, more like. For I had divided my time exactly between the two cities in anticipation of five meetings in each, but in the end the recruitment agency only managed to set up two interviews for me in Frankfurt, and banged the remaining eight into a two day period in Berlin (plus one late evening slot!). Each appointment was one and a half to two hours from the next, which meant some seriously fancy footwork using all the available transport modes to which my day pass entitled me: U-Bahn, S-Bahn, regional train, tram and bus - I rode them all. Yesterday, for example, I took an S-Bahn, then a bus, then another bus, then an S-Bahn, then a tram, then another tram, then an S-Bahn, then two tubes, then two more tubes, then an S-Bahn, then a regional express train, then a plane, and finally an airport transfer taxi. Oh, and there were some meetings in there too somewhere. 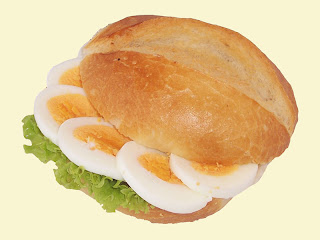 This punishing travel schedule meant that sleep and food rather went by the board, and I was typically surviving on 4-6 hours' kip a night, McFish Menus, bags of pretzels (of which I still fail to quite see the point), egg rolls, warm miniature bottles of Sekt, potato crisps (you can have any flavour as long as it is paprika), and the odd croissant snatched from the breakfast table. Well, I use the word "croissant" advisedly, for this particular morning good is not a croissant as we know it and should be approached with caution, even if bearing the label "französischer Art" (French-style), which it very likely won't be.

Oh, and a few cups of tea "to go". And I fear there were the inevitable tea issues again on this trip, if anything more acute than usual. My hotel in Frankfurt, for example, had run out of Klassik Tee, perhaps precisely because it WAS a "classic". McDonald's at the Frankfurt Hauptbahnhof had no black tea either, and tried to fob me off with a selection of green and berry-centric varieties, which are not to my liking at all. Then yesterday in a kebab shop in the centre of Berlin I was offered black tea from an urn, which looked characterful, however, the black liquid emitted was so stewed and bitter you could have stood the Berlin wall back up in it. It was at least mercifully cheap. 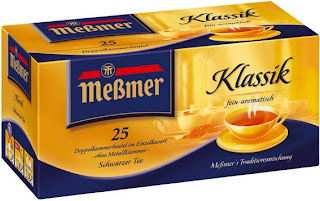 So it gives me great pleasure to give the award for the most anglophiliac purveyor of tea to the Deutsche Bahn, for the buffet on the train to Berlin offered not one but THREE sorts of black tea: Earl Grey, Assam and English Breakfast. I was surreally spoilt for choice!

And while we are on the subject of awards, the one for the most heroic act of customer service goes to the barman at the Hotel Ibis in Berlin-Ost, who came up to my room to remove a large spider just to the left of the lavatory cistern, even though he readily admitted to being frightened of them himself. Then, in the act of explaining how the flat screen TV worked, to which end he set the spider in its toothmug down for a moment, I fear he may have unwittingly given the creature a window of opportunity to escape, for after he had gone I spotted another, remarkably similar looking, spider hanging from the edge of the shelf beneath the TV.... But if I was too afraid to watch television now, I could at least use the loo with confidence. : - )

Having made it through the week, I can also comment with authority on the pros and cons of carrying out interviews in hospitals. On the plus side, they are open 24/7, which means that - depending on the shift patterns of the people you wish to see - you may be able to make a very late or a very early appointment. Now YOU might not wish to keep those hours yourself, but that is another matter... And because hospitals are public buildings which are open all the time, if you arrive early you can just wander in and find somewhere warm to sit, freshen up in the ladies, or get a drink in the cafeteria without asking permission, which is not the case with the normal sort of business premises I visit. And the very fact that I was able to make such spectacular use of my travel card is proof that hospitals must be well served by public transport links and accessible to all, which again is not typically the case with the industrial companies I interview. (Hence the bonkers road trips...) 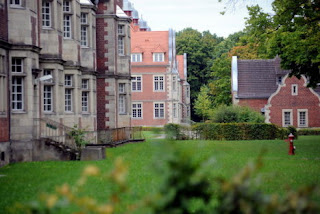 The main downside to hospitals is that they are such large places that reception staff may well not have heard of the person you have come to see. There may not be a telephone directory as such, or if there is, not everyone will necessarily be listed in it. Two reception staff even denied the existence of my respondent point blank, which caused my heart to lurch a little, while two others gave contradictory and airy sets of directions, which had me running round in circles looking for a building that was either up and to the left, or behind and round and to the right, but exactly how far either way was anybody's guess. Most of the time, the person I am meeting comes to the foyer to collect me, or sends an assistant, but here the onus was very much on me to winkle these people out in their far flung buildings. Even though this seems to be general practice for visitors, several nursing staff declared themselves to be astonished that I had a) found their office at all and b) showed up on time. Arriving by bus or tram garnered extra Brownie points for initiative and thrift. 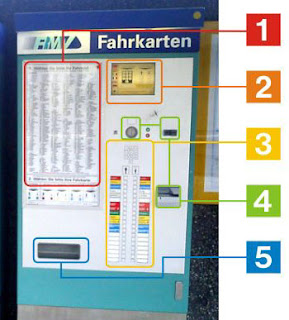 There is one shameful incident to which I should perhaps own up, namely that while the caning of my travel pass in Berlin was legitimate, I did also get caught without a ticket on a short tram journey in Frankfurt. I had attempted to feed a 20 euro note into the automated ticket machine, which was the smallest note I had on me, but to no avail. I tried it facing both ways - and even tried buying a more expensive ticket than I needed - but the machine wasn't having any of it. I decided to chance it on the three stops to the train station, but kept the 20 euro note ostentatiously visible in my hand in case an inspector jumped on. And sure enough, an inspector did get on at the next stop and having heard me out, said that I should not have tried to pay with anything larger than a 10 euro note, as per the illustration of accepted coins and notes displayed on the front panel of the machine (a minor visual detail which had completely escaped my notice). Luckily, he let me off the 40 euro fine as I was "not from Frankfurt". Had he enforced the letter of the law, I would not only not be "from Frankfurt", but not planning to go "to Frankfurt" again any time soon. 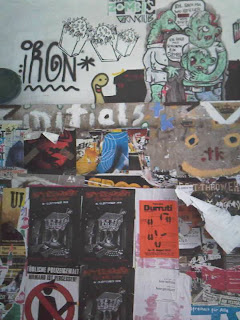 The perfume aspects of the trip will, as ever, be covered in a separate post. Perfume sniffing was confined to Frankfurt, and to some fairly mainstream outlets at that. I can't be sure, but I sense Berlin might have been a better hunting ground. Mind you, I am a huge fan of the city, and my default position is that it is better than anywhere else in Germany for most things. Or let's just say that for graffiti, edgy clubs, wacky clothes shops, atmospheric courtyard cafes and all manner of bizarre and random stuff generally, it is simply unbeatable.


Photo of Hackescher Markt from Wikimedia Commons, photo of egg roll from stadtbaeckerei-gatenbroecker.de, photo of tea from food-shop24.com, photo of hospital from morgenpost.de, photo of ticket machine from trampage.de, graffiti photo my own.
Posted by Vanessa at 17:24

Your journey sounds rather high drama - I love that! Food and drink issues can be very important, especially when you don't get what you want and need (one of the things I can be fairly high maintenance about).

I will look forward to hearing about your sniffing adventures as well.

I do need tea to be just so, it is true, though mostly the local cuisine is a highlight of any trip - when I have time to enjoy it, that is!

Glad to know you're home safe. What a tumultuous trip! Not to mention the poor opportunity to eat. You must be starved!

Welcome home! I can imagine that it would be even harder to travel around UK hospitals by public transport, but not withstanding that, what an epic journey!

"Tumultuous" is the perfect word to describe my week! And a visit to the supermarket to stock up on lots of fortifying foodstuffs is imminent...

Thanks! Hmm, I expect you are right about transport links to UK hospitals. I had an outpatients appointment at my own hospital this morning, and it would never have occurred to me to take a bus. Mind you, the rush hour traffic is no picnic for drivers either at that time of day.