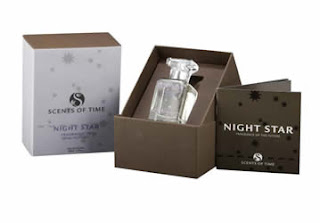 It is two years since David Pybus, author, “(al)chemist” and “aromancer” - a "dealer in aromas" - presented his idea for the Scents of Time range to the team of business investors on the Dragon’s Den TV programme. Two of the dragons, Peter Jones and Theo Paphitis, were impressed by Pybus’s concept of creating replicas of historical perfumes, and each bought into his fledgling business to the tune of £40,000. Pybus’s swashbuckling pursuit of ancient smells earnt him the nickname: “the Indiana Jones of the perfume industry”, and much has been written about the stories behind each scent, five of which have now been marketed (Night Star, Maya, Nenúfar, Ankh and Pyxis), with one more release planned each year. Originally stocked by John Lewis, the full range of scents is currently available via the Scents of Time website and its exclusive US distributor, Aquadeluna, while all the scents except for Night Star are also on sale in the British Museum shop in London. 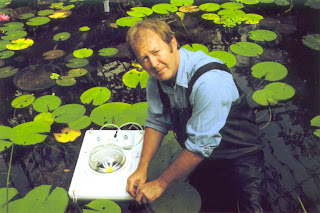 Lovethescents kindly sent me a smidge of her own tiny samples from The Perfumed Court of three of the Scents of Time range, and as there are relatively few reviews of the actual perfumes themselves, I thought I would add our twopennyworth. On the Scents of Time website are links to pdfs of booklets accompanying each scent, with the rather thoughtful warning that the white writing on a brown background “might not suit your eyesight”. : - ) Fragrantica has reproduced the story behind Night Star here. The Scents of Time website also gives details of the exact techniques used to recreate each fragrance, comprising a mix of headspace technology, found materials, old formulae and anecdotal records.

Mr Bonkers’ ears pricked up when I mentioned that a number of scent samples went down with The Titanic (in the luggage of a German perfumer, Adolphe Saalfeld), but had been recovered from the ocean floor in 2001. One in particular - the so-called “Rosa Maris”, or “rose of the sea” - was subsequently recreated by the Scents of Time team with slight concessions to modern taste. The reason his curiosity was piqued by this perfume is because according to Mr Bonkers, Titanic is “the best film ever made”, even though it doesn’t feature Nicolas Cage, “the best actor ever made”, and - unlike his usual fodder of corpse-strewn zombie films - only has “minimal violence”. (That's if you exclude the not inconsiderable impact of ship against iceberg.) Mr Bonkers has another personal interest in all things Titanic-related, for rumour has it that his family is directly descended from Captain Smith, who, like Mr B, was born in Stoke-on-Trent. You may say that that is not the most auspicious of family connections to broadcast, but still. 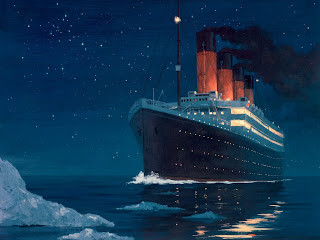 But anyway, Night Star is NOT the replica of the scent that sank with the The Titanic. Out of deference to the deceased perfumer and to the last survivor of the wreck, Elizabeth (Millvina) Dean, who was consulted on the matter, a completely different perfume was developed instead, which was to be "a fragrance of the future" - Night Star. As Pybus explains: "For steam ship read star ship. For latitude and longitude read galactic coordinates. And Night Star, a symbol of future hope, would be dedicated to Millvina, who, along with Adolphe, has now joined the night stars above."

The planet that was singled out as the destination for the "star ship" was Gliese 581d, which astronomers believe may be similar to Earth. The brief was to create “a fantasy fragrance based on earthlike aromas which would be both alien in make up, and yet have a comfortable, earthly feel, reflecting Gliese 581d’s potential as our new home.”

“I'm a bit disappointed because all three have a bit of a cheap quality to them in the opening, something I did not expect. After about half an hour, that alcoholic-y start disappeared in all three and they all improved.”

And specifically on Night Star…

“Night Star- reallllllly wanted to love this. Lots of violet and hints of powder in the middle, base is probably the best part here with less powder, although more violet than I would ever want/need.” 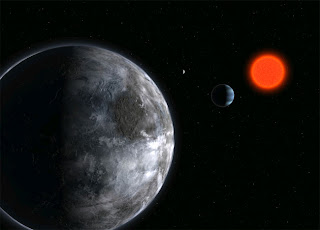 When I first tried Night Star, I also got this alcohol-y, oily note, which jarred with the powderiness of the formulation as a whole. Today, however, the opening was less rasping, and the scent dried down to a much smoother and almost creamy finish. Fundamentally, however, for at least some of its development, Night Star still has that austere, powdery iris-violet thing going on which I struggle with in Creed Love in Black (even though I own a bottle). So, texturally speaking, for me it lacked the crisp, bright feel that I would expect from a perfume inspired by a star in a clear night sky. I do detect the “earthlike aromas”, however to my nose there is an old fashioned quality to Night Star (thanks to the violet and iris), which would have fitted right in with the original Titanic scenario, but seems at odds with its positioning as a symbol of the future, and the notion of intragalactic travel. I guess I was envisaging something clean and futuristic like Thierry Mugler Cologne, say, or one of those ozony, "now you sniff it, now you don't" Escentric Molecules.

Below is a short excerpt from a description of the story behind this scent on the Aquadeluna website, involving chocolate and the watery sacrifice of young Indian women: 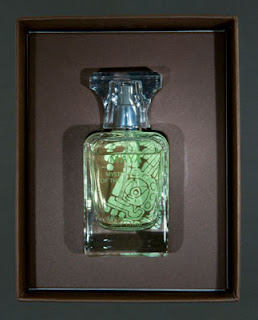 “Maya (Mystic Scent of the Americas) takes its name from the central and North Americans who inhabited present day Mexico and Guatemala…. It is believed that young maidens were drugged at a temple by concoctions using the narcotic effect of tropical flowers, vanilla and chocolate as well as the smoking incense of burning copal resin and that this aroma was their first sense of eternity and led them more willingly to sacrifice.”

“Maya - hints of bitter chocolate with some light florals and light incense. A bit bland; might be better with more incense.” 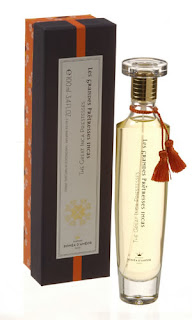 Although the notes are only broadly similar, Maya reminded me stylistically of Romea d’Ameor’s Les Grandes Pretresses Incas.

Both scents combine fruit and chocolate, which has always struck me as a curious match, and while this is my "favourite" of the three tested, I didn’t really care for it. I certainly didn't find it compelling enough to allow myself to be tossed into a Sacred Well.

Nenúfar (The Sacred Scent of Cleopatra) is based on a recreation using headspace technology of the blue lotus flower or blue water lily, which was a sacred bloom to the Pharaohs. According to Pybus, Nenúfar "is as near as we can get to the aromatic experience of the ancients". 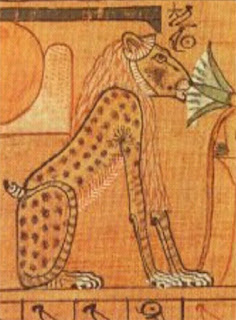 Pybus adds that the blue lotus flower's chemistry contained a hallucinogen, myristicin. Egyptians apparently made a kind of home brew by steeping the flower's petals in wine and drinking the resulting heady concoction – as recounted in Tennyson’s poem, The Lotus Eaters. Myristicin is also found in nutmeg, which has been included in the formulation for reasons of pharmacological exactitude!

“Nenufar- a very familiar floral-aquatic. Nice enough, but completely unoriginal. Reminds me a bit of a high-end body wash in 'water lily' or the like.” 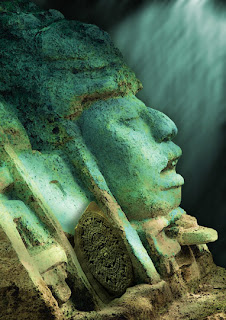 And finally, on the FAQs section of the Scents of Time website, I was surprised to read the following answer to a customer’s question – which may have been prompted by the limited distribution of this range:

“Q - Can the fragrances be in any way linked to modern perfumes - just so I know without testing that I would like them?

A - Well we use Michael Edwards' fragrance families to describe my perfumes so there is a loose connection as follows:"

The perfumes listed to illustrate the fragrance family of each scent are as follows:

Light Blue? Sunflowers? I know the aim is just to convey the "vibe" of each fragrance category, but hello...? Actually, Sunflowers is not a bad analogy for Nenúfar, but Light Blue is a million miles away from Night Star. I suppose L’Air du Temps has a similarly spiky quality, but completely different notes. Bvlgari Femme or Creed Love in Black might have been a bit nearer the mark.

And anyway, what in the world were the Scents of Time people thinking of, encouraging blind buys in this manner, even had the scents listed above been a closer match?

So in summary, I think the concept is a great one, in tune with the growing lobby for more memorable and interesting perfumes outside the tired formulae of the mainstream. Two of the three scents are unusual, but not particularly to my taste, while the third – though historically authentic - smells remarkably like a mass market fragrance to me. For anyone familiar with the Romea D’Ameor range (which also takes its inspiration, if not its formulae, from historical figures and cultures) - and purely based on the three I have tried, which is not strictly fair, I know - I'd say that the Scents of Time are similarly mixed in style and execution: for example, Romea d'Ameor's Les Princesses de Venise is a fairly bland fruity floral, and though others in the line had more of a twist, none moved me.

Historical replicas of scents lost in time? It is only one (highly subjective) opinion, but some things are lost for a reason...


Erratum - Mr Bonkers has asked me to point out that his comments about the film Titanic and Nicolas Cage were ironic. He does like zombie films though.

All photos from the Scents of Time website except the photo of The Titanic (from cruiseline.org), the Romea D'Ameor bottle (from dameor.fr) and the photo of Gliese 581d (from textually.org)
Posted by Vanessa at 13:35

I love the idea of re-creating ancient lost perfumes. It seems romantic and scientific and utterly useless fun at the same time. (Like my Art History degree). Too bad these were umimpressive.

I really wanted to love these, and you should definitely check them out if you get the chance and make up your own mind. Marla of Perfumesmellingthings is a fan of the line, for example, but sadly these three were just not my style.

Yes, the idea is a fantastic one. Each tells a story and you want to believe those stories...but then you try the fragrances :-(

I would love to get anyone else's views on the range, though I realise that the limited distribution means that not very many people will have tried them. Perhaps the British Museum have testers if there are any Londoners reading!

PS I have gone back and expanded/amended my potted version of the Night Star story, which should be clearer now!

the inca priestess by romea d'ameor is fantastic, it is not an old potion, but a really great moder perfume which uses forgotten flowers.
Pierre Bourdon is the greatest perfumer of this century !

Glad you love Les Grandes Pretresses Incas and Pierre Bourdon is indeed a great perfumer - his recent creation, Plum for Mary Greenwell, is very fine. A relative of mine owns a bottle of the Romea D'Ameor one and it smells great on her.