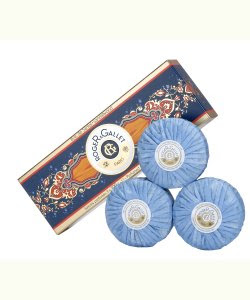 Roger & Gallet is a well known brand of toiletries comprising perfumes, "fragrant water", solid and liquid soaps, body lotion, hand cream, shower and shaving gels, and scented candles. Ever since I was a child, back in the distant heyday of Bronnley lemon soap, Baededas bubble bath and Yardley talc, Roger & Gallet soaps exuded an air of luxury and were the ultimate aspirational gift. Today I would probably accord that status to small leather goods from Aspinal or a silver locket from Penhaligon's, however, I would still place Roger & Gallet solid soaps pretty high in the gift list pecking order.

Curiously, I don't feel the same about the other products in the range, least of all the perfumes. This may be due to the fact that they are extensively stocked in my local department store, which I regard as the kiss of death to all things fashionable and in good taste. To my mind, the other problem with the brand is that it has wide distribution in pharmacies, where it takes its chances alongside the depilatory creams, lip salve and dental floss. 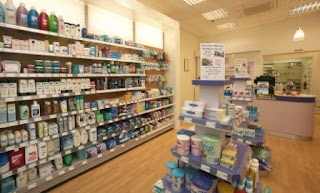 Ah, I hear you say, but the perfumes in Boots also live cheek by jowl next to a motley assortment of corn plasters, Frizz-ease and cotton wool balls, so is the fragrance section of Boots also to be written off on account of its chemist-y contiguity? No indeed, for the perfume counter in Boots is big enough to square up to the rest of the store and its array of glamorous and not-so-glamorous medicaments and toiletry staples.

But the distribution of Roger & Gallet products through independent chemists troubles me for some reason, and undermines the credibility of its perfumes. Though not, crucially, that of the soaps...

Bois de Santal (Sandalwood) is my personal favourite. Many perfumistas are on a permanent quest to find the ultimate sandalwood fragrance. I believe I have found it in Damien Bash Lucifer No 3 - or I have until something better comes along - which I doubt it will. But for anyone still out there chasing their HGSS (Holy Grail Sandalwood Scent), there is a lot to be said for cutting your losses, aborting the quest - Damien Bash has discontinued its perfumes anyway - and sniffing this soap instead.

For Roger & Gallet is without question the ne plus ultra of sandalwood soaps - and I speak from a position of some authority, as we are a two brand sandalwood soap household, the other make being Taylor's of London. Taylor's is also round, and teasingly wrapped in that familiar ruched paper spiral, secured by a central circular label. Moreover it does smell somewhat of sandalwood - admittedly, more when it was new - for the scent seems to have faded in use. 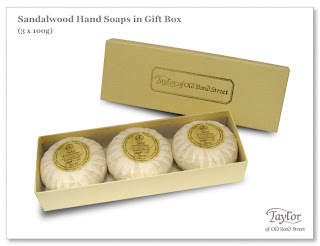 Yes, the Roger & Gallet has the more robust sandalwood fragrance of the two. It is richer and more woody, incensey even, which makes the experience of pressing your nose to the paper almost meditative. You don't even need to take the paper off to get an uplifting lungful. And that way you can also savour the conspiratorial crackle of its wrapping. This is the Musc Khoublai Khan of the sandalwood soap scene. I almost feel like a member of a secret sect when I sniff it...

Now my special bond with this soap may be enhanced by associations with someone from my past. I don't wish to overplay this connection, because he also used another soap from the R & G range which didn't move me especially, from which I deduce that the primary appeal remains the sandalwood itself.

Mr Bonkers, meanwhile, has a much more matter of fact approach to soap, and has never to my knowledge cared for a specific soap fragrance, let alone been bowled over by its smoulder. His main requirement of a bar of soap is that it should be free of particulates (petals, lavender sprigs, poppy seeds and other "encrustacea"), not smell too "poncy" (frangipani, lily of the valley, magnolia, rose) or too "weird" (hemp, black pepper, tar, algae, olive oil, also anything dark and inherently sinister, not forgetting bile - see photo below), and most importantly that it should produce a good lather. I agree with him about the particulates, and my other two bêtes noires are strongly scented soaps of any kind, and ones that either crack, or conversely, turn to mush. 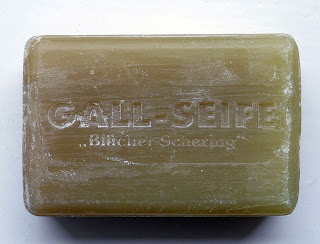 For although I may reserve the right to turn to mush emotionally when sniffing this transcendental rendition of the sandalwood note, it is imperative that the soap itself stays firm, right down to the last little sliver...Which this bar of Roger & Gallet has every chance of doing, since it has never been in contact with water, and only briefly came out of its handy plastic carrying case long enough for me to write this post.

I am SO totally with you about the Roger and Gallet soaps!
The plastic case in my own washbag contains R&G's Carnation, but Big has Sandalwood and I will confess to pinching it semi-regularly.

Soap is one of those strange things that can lift a simple act like washing your hands from the mundane to something more rewarding. I love using posh soap - it's cheap compared to most luxe items but you get a disproportionately big thrill every time.

And if you store unused bars in your sock drawer, your tootsies smell delish as an added bonus.

Love Wordbird's idea of putting the soap in a sock drawer....I'll have to do that now.

As for Roger, well I find the soaps rather drying. I am a bit of a moisture freak, though. I love ultra-hydrating soaps and lotions/butters. I find that some highly fragranced soaps have this issue: ie, being stingingly dry, unless of course they're topped up with shea or the like.

For a sandalwoody fix, I really enjoy Chapney's Oriental Shower Cream (know it? :-i). It isn't drying in the least, and smells rich and wonderful. In terms of bars, I do love our local Lucia brand which is heavy on moisturizers as far as soaps go.

Getting back to SOs and Roger, my DH's favorite is the Lettuce Leaf one. It's very refreshing. Maybe your man might enjoy it too? Plus it's ultra-sudsy :-)

Well, well, so Big is a Sandalwood man himself - am delighted to hear it! Must check out the Carnation, which is not one I have tried.

And you are right that for a relatively small outlay, posh soap can have magical transformative powers... : - )

I had never really noticed the drying out aspect to R & G soaps. This may be due to the fact that I am from the generation that didn't bother moisturising till they were about 40, just as we didn't begin using high factor sun cream till about the same time. Hydrating effects or otherwise of toiletry products simply passed me by until comparatively recently. Perhaps I should get this particular Roger out of its case and put it to the test!

Oh, and I do agree with you about the Champney's oriental shower cream - the sandalwood note is lovely in it. After using that in the morning I feel that only Bois des Iles can do it justice as a SOTD.

Sudsy lettuce soap? That sounds innocuous from a fragrance perspective, and suitably lathery. Will point Mr B in its direction - or rather the soap in his.

I simply adore the carnation R&G soap, spicy, warm and not in the slightest bit flowery or sweet, it's amazing - personally, I'd love more products with the same scent, a body lotion would be amazing, but they only make the soap in Carnation.

I can see I'm going to have to check out the Sandalwood now too. These are amazing soaps, I always have a couple around.

Another vote for the carnation soap - it is definitely going on my "must sniff" list.

I am aware of having written about some pretty random things on this blog over the past year, but it seems as though the Roger & Gallet soaps strike a chord with everyone!

Y'know, I've always thought of sandalwood as being about soap, with sandalwood perfume being a sort of odd take on the theme. But I never knew which was the "right" sandalwood soap; now I do. Time to buy a bar.

R & G Sandalwood soap -- (many) years ago I bought some in London as a gift for a friend -- carried it all over Europe in my backpack, thinking it was unavailable in the US, only to find when I returned that they sold it at the posh drugstore on the corner. I didn't realize they still made it!

Yes, I would say this was the "right" sandalwood soap, and I know you love your bath products, so I commend it to you!

Yes, Roger & Gallet seems to be available the world over, though it hasn't found its way into the supermarkets yet - that would probably be a distribution channel too far, given my reservations about pharmacies. : - )