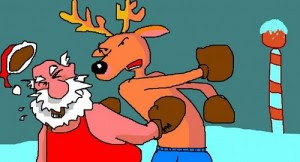 Thanks to a curious unseen algorhythm, my first two posts for Ça Fleure Bon have been published the day after a public holiday involving the consumption of copious amounts of turkey - "holiday feasts", no less.

This remarkable pattern may be broken in January, for by my reckoning my next post should fall after Martin Luther King's Birthday (not that that holiday is especially associated with poultry, to my knowledge), and if it happens to coincide with the day after Burns' Night, at least the protein element will be different, and the presentation (in a sheep's stomach) radically so.

So here is a link to the latest one: Boxing Day "Bah Humbug!" And A Glut Of Gift Giving Gaffes

Christmas in this household was decidedly low key this year. Mr Bonkers has unfortunately been struck down with an unpleasant combination of flu and a stomach bug. He struggled up at 9am, laid the table, and went back to bed until Mrs Bonkers Senior arrived in the afternoon. Our usual Christmas tipple of champagne was put on ice, and Mr B opted instead for pints of Ribena, which at least matched the place mats. This may have been the first Christmas ever when he has not been well enough to devour a whole Terry's Chocolate Orange in one sitting, though he did manage a second helping of his mother's trifle - because the jelly "slipped down nicely". Then he manfully lounged around on the sofa till just after The Royle Family, and I say that without a trace of irony - it took all his reserves to manage even short stints of festive slumpery.

On the present front, I did pretty well on the whole. Mr Bonkers gave me an I.O.U., Sibling Claus gave me a big bottle of Diptyque Eau Duelle, Mrs Bonkers Senior gave me a pretty silver bracelet and half a radiator to take the chill off Charlie Bonkers's quarters. Indeed the only gifting gaffe which I could have included in my Ça Fleure Bon post is the present a good friend gave me, which comprised four different foodstuffs. The only one of the four I liked was the packet of chicken soup.
Posted by Vanessa at 14:08

I shall head over to CaFleureBon shortly, but wanted to register my stop at your doorstep with a "Happy Boxing Day."

And to note that it took a trip to Google, but I confirmed my understanding of the color of your placemats. Ribena, eh? I'm going to guess the red. As a child, I would have undoubtedly been a fan of the purple, as my favorite flavor in pop (soda) and pop (sicles) was generally "purple."

Oh, I'll also congratulate you on the Eau Duelle here, as well as the silver bracelet. Half a radiator sounds suspiciously like a brick shy of a load, though the warming properties felt by Charlie Bonkers help the raised eyebrow descend again.

Does Ribena come in a Chicken Soup color flavor?

As cordials go, Ribena is a bit of a chameleon in the sense that it is a deep maroon in its fully concentrated state, but when diluted in varying degrees it can be made to turn most shades of red. The blackcurrant berries on the label veer more to the purple side, but as far as I am aware there is only one version of the drink. Well, aside from low and lowest sugar versions, that is.

Ah - I should have explained: the other half of the radiator was gifted to Mr Bonkers, so I am happy to report that the cat has a whole, intact heating appliance to herself.

Sorry to hear about Mr. Bonkers! It truly sucks to be sick on Christmas, but appears you all made the best of things. Are you enjoying your guest blogging? Anything different than what you expected? Charlie Bonkers should be very happy with his gift.

Yes, Mr Bonkers is seriously under the weather, sadly. Charlie Bonkers (who is unexpectedly female : - ) ) currently has access all areas, which only happens in times of great sickness or inattention.

I tend to think of my contributions to Ca Fleure Bon as "infrequent scheduled blogging" rather than guest blogging - ie I think of "guest blogging" as a one off, but I could be wrong. If so, that would be a way in which it is different from what I expected! : - )

Poor Mr. Bonkers. :( Whenever a vacation is pending, I always eye sneezing and snuffling people with great suspicion, because I fear that fate is determined to ruin my time off.

And congratulations on the infrequently scheduled blogging. :)

Thanks, CF! I must say I have been eyeing Mr Bonkers with suspicion for some weeks now. Longer, even...

Oh dear , I got through the two most important two days but am aching and coughing. I really feel for your husband . My sense of smell is not great either but so far I have managed food a little too well. I hope you don't come down with what sounds like Noro virus ?

Hopefully Mr Bonkers gets better very soon! Sounds like he's not doing too badly if he was able to eat, though :-)

Congrats on the Eau Duelle! Yay!

Loved your article in CFB, by the way. It got me thinking about worst gifts ever: for me it might be a pack of plastic tops for opened tins. Useless since they're an odd size and fit nothing.

I'm so happy you got Eau Duelle as I know you love it so!!

Sorry to learn that you have been suffering as well over Christmas. Mr Bonkers is no better, but the suite of viruses he has caught does not include the vomiting one, so for the moment I have ruled out the possibility of the Noro-Virus. Mind you, I have an outpatient's appointment at our local hospital so he may yet acquire the viral equivalent of a Royal Flush!

Mr B has gone backwards in the eating stakes, I am afraid, even though I have tried to fashion him nourishing concoctions out of the vegetarian remnants of Christmas dinner.

Those plastic tops are right up there with the holey Marigolds, I'd say!

Afraid Mr B is a long streak of misery and snot, and I am concerned as to how he will cope when I go to Holland tomorrow.

The Eau Duelle is a shining beacon in a rather low key Christmas, indeed!