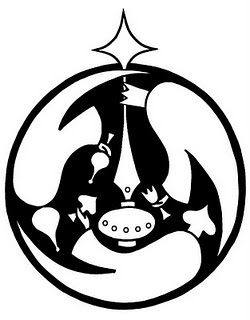 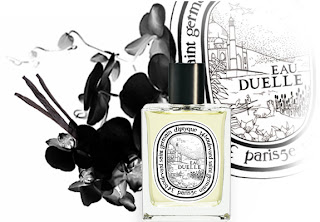 I love the word “frankincense”. It rolls off the tongue in the same satisfyingly clunky manner as the name “Blenkinsop”. I may in fact love “frankincense” as much as my other favourite words: “gutta percha”, “tangerine”, “susurration” and “kibble”. That said, I had to trawl pretty widely to find a perfume featuring frankincense with which I had a particular rapport. I was initially going to choose Flower by Kenzo Oriental, but on checking the notes found that the incense in that one is “Chinese”, which, like that country's livelier styles of fireworks, is something else altogether. A blend of agarwood and sandalwood I believe, whereas frankincense (and myrrh) are of course both fragrant resins.

Then I remembered my newest fragrant squeeze, Eau Duelle by Diptyque, which I am quietly confident of Sibling Claus giving me for Christmas this year. Classed as a woody oriental and created by Fabrice Pellegrin, it has a number of my favourite notes in it, notably saffron, but also pepper, which was in the Kenzo that failed on the incense technicality. And while Eau Duelle is primarily a soft, cosseting scent featuring not one but two types of vanilla – the lighter firnat and the darker bourbon – its beguiling appeal is also due to the smoky tendrils of frankincense in the base.

The duality of Eau Duelle works on a number of levels: the internal light and shade of the vanillas themselves, and of the vanillas versus the incense, all echoed by the contrasting monochrome livery of the Diptyque brand. And beyond the frankincense connection, there are other tie-ins with the Christmas theme: Eau Duelle is both comforting and mysterious, like so many aspects of Jesus's life, if that is not too crass a comparison. And as the Son of God, Jesus embodied the duality of the divine in human form – “by flesh embound”, indeed. 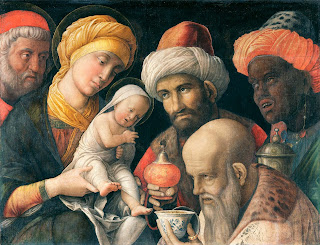 Moreover, the wise men are traditionally depicted as being both black and white – well, one or the other, I mean, not both colours in the same Magus. That would give a very different spin to the term “Bah! Humbug”...

Then I guess there is the uneasy duality of Christmas itself, for somewhere buried underneath the groaning mountains of food and presents there is a religious festival struggling to get out, though every year it slides a little further into secular oblivion. Which brings me to that other, politically correct, duality of “Christmas” versus “the holidays”, a phrase I heard countless times during my recent trip in the States - it is standard usage over there but still sounds strange to British ears. There are holiday cards, holiday trees, holiday pies, holiday feasts, holiday wines, holiday gifts, holiday traffic and (presumably) “holiday holidays” - as distinct from “holiday holidays” - which as their name suggests are at a completely different time of year. Intriguingly, I heard on the news the other day that President Obama is planning to take a “holiday vacation”.

So yes, Eau Duelle would have been a good choice for the baby Jesus all ways round. Perhaps, in the next edition of the Good News Bible - or whichever one is the latest update of the original King James version – we will read that the wise men brought gifts of shares in an Emerging Markets Technology Fund and a £10 mobile phone top up, a bottle of Eau Duelle and....er....some myrrh.

But then again, nothing has quite the ring of frankincense. And a word that is at once a perfume and an object lesson in the beauty of the English language – why, that is a very precious gift indeed.


Photo of Eau Duelle from the Diptyque website, photo of the Magi from Wikimedia Commons
Posted by Vanessa at 18:41

Another beautiful review.
I really do like this fragrance and it's a wonderful choice for frankincense, which types just as well as it sounds :)

Haha - I must do the typing test!

I've just been over on your blog reading your very comprehensive review of Ineke's Evening Edged In Gold. Coincidentally, I tested pretty much the whole Ineke line yesterday at Newark airport, except for this one! Which took some Derring-Do when you are about to sit in a confined space for 7 hours...

Now there was an Ineke scent in a deep red box called Gilded Lily that could have been another golden contender, in terms of the name at any rate. : - )

Decided the monochrome icon would be more apt for this post!

Gorgeous review. But then, you had me at Blenkinsop. :D

I once watched an interview of Eau Duelle's perfumer and translator discussing the "duality" of the fragrance. It was the fragrance industry's version of the hockey player interview...no real insight, just a bunch of words. You should have been interviewed instead!

Vanilla is a touchy note for me, but I am very drawn to this fragrance. Juniper, tea, saffron, frankincense...I just might make myself face up to vanilla!

I couldn't decide between Evening Edged in Gold or Gilded Lily. After sampling, I realized that EEiG seems more "festive".
It's a San Francisco based house :)

I still haven't tried Eau Duelle but you make it sound bottle worthy. :)
Love the review!

Bah humbug indeed , lol ! I do so agree that saying "happy holiday" is so very difficult . An asian girl served us at the supermarket yesterday and I tried to say it then decided "happy Christmas " is fine after all I wish the local Muslims "happy Eid" .

Your review has done what they are all doing , adding more names to my want list !

I'm also a great Frankincense lover- I haven't spent enough time with the new Diptuque actually and you've re pricked my interest- I wasn't so keen on their new green but this I think I need to try again- happy Christmas!

Thanks - your name trips off the tongue rather nicely too, if I may say so...

"Hockey player interview" is good! I'm normally the one doing the interviewing, of course... : - )

Now I should warn you that Eau Duelle is pretty vanilla-y. You could try taking a gentle run up with Lacoste pour Femme first as it has a similar level of the stuff in it, I'd say.

Yes, I clocked the SF base of Ineke, which intrigued me, having just come from there on my travels. And Evening Edged in Gold did look suitably festive all right!

I do hope Sibling Claus delivers! Some reviewers have found this scent pleasant but uneventful - though as I said in an earlier post, bland doesn't have to mean bad in my book, not that I would call Eau Duelle that.

I am all for specificity in greetings myself. I got chatting to a chap on the plane from San Francisco who was headed home to Mumbai. He told me about their Diwali Festival and how the date always shifts around, like our Easter. He said they don't in fact have any religious holiday around the (Christmas) "holiday" season, so I guess to be completely inclusive one should perhaps wish him "Happy Non-Holidays"? : - )

The green one was fresh and brisk, but I agree that it didn't move me in the way Eau Duelle did. Perhaps it might appeal more in spring?

Yours was one of the two big "ST"s on which I cut my teeth when sudden onset perfume mania first struck in 2008 - the other one of course being NST...

Ah, you're back safe and sound and enjoying word-play, V, so all is well in the perfume-world. Hooray.

Frankincense is the real deal, isn't it? Nothing like having a socking-great smouldering censer of the stuff swung perilously close to your infant nose at too-frequent intervals to give you a taste for liturgical thrills with this hard stuff. By gum!

Now, if you - or any other kindly expert who happens to be reading - could tell me how to light the mini-charcoal-briquette* that supposedly enables one to burn frankincense resin, I'd be setting the smoke alarms off forthwith. (*Little chunky disks of fairtrade charcoal with a pencil-width hole in the middle: I haven't a clue how to ignite them!)

Happy Holidays Holiday holiday ... and have a great Hogmanay too.

cheerio, and thanks for the cracking posts this year,

Yes, I'm back, and I must say I did appreciate your virtual travel companionship while I was away. Your ongoing concern buoyed me up during those darkest cocoa-deprived moments in motels by freeway intersections. Though for the record I prefer milk chocolate.

Haha, yes, I suppose frankincense was a very formative smell in my childhood, right up there with Silly Putty and freshly washed Sindy hair.

Sorry I can't help you with your briquette ignition issues - I don't suppose matches were any help at all?

Thanks for the quadrophonic Holiday wishes, and for all your entertaining comments this year!

Eau Duelle is a new love of mine - and of my husband's. I found a good online deal so bought it for us for Christmas (not "the holidays"), and it arrived a couple of days ago. I must say I find it difficult not being able to abbreviate its name as I do with many 'fumes, though: ED has unfortunate Other Connotations which will be recognized by anyone who regularly receives spam emails of a certain persuasion...

I'm surprised that you suggest a 'run-up' to it with Lacoste pour Femme: I was wearing that as my bed-time scent last night and don't find any similarity at all; but that's what chemistry is all about, I suppose. I actually find some similarities, on my skin, between the Diptyque and Guerlain's Bois d'Armenie; and, before I read the notes, assumed it was benzoin providing that similarity. I dunno what it is, now! Anyway, on my skin it starts off like a freshly-spritzed G&T and dies down to second-hand-book shops. Lovely.

Merry Christmas to you!

I thought of you on my travels - I met a man in Denny's from your adopted State! (I use the term "met" loosely, obviously.)

I don't think Lacoste pour Femme is similar in terms of how it smells actually, only in the intensity of its vanilla note. Not even quite how that note smells either! Bois d'Armenie is a nuttier, paperier, woodier sort of vanilla, but probably also at the same degree of intensity.

Love the second-hand book analogy! It is just the weather again for Bd'A, thinking about it - I wore it in the snow last year.

Merry Christmas to you too!

I'm happily giggling over "Blenkinsop". And now I have something to try at the Diptyque boutique--so far, sadly, this line has left me cold.

It is interesting how Christmas greetings have diverged. For Americans it's always "merry Christmas" or "happy holidays", never ever "merry holidays" or "happy Christmas". In fact, I don't think most Americans _ever_ use the word 'merry" in any other phrase. At least, not Americans in the regions where I've lived--I'm probably foolish to speak for the whole sprawling place.

Tbh, Eau Duelle is the very first Diptyque to move me, so it must have something about it, you would say...

Interesting insights on the season's greetings malarkey. We do use Happy Christmas extensively here. "Merry Christmas" is considered a little wooden and greetings card-speak in some circles.