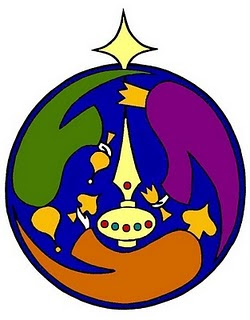 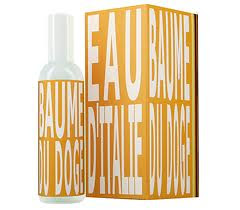 Baume du Doge, created by Bertrand Duchaufour, takes its inspiration from Venice: firstly from the lofty personage of the Doge himself, the Republic's highest ranking official, and secondly from the spice trade, for which the area was an important hub. The position of Doge, an ecclesiastical, civil and military leader in a somewhat gynaecological-sounding power structure known as “caesoropapism”, was created as early as 700 AD, and persisted for some 1000 years.

I use the term “persisted” advisedly, for holding down the office of Doge was no cushy number, and the roll call of incumbents sounds a lot like the screenplay of a medieval Pulp Fiction. Yes, a cursory glance at Wikipedia reveals that some of the 120 doges over that millennium, who clocked up an average of 8.33 years apiece, actually had a bit of a torrid time to say the least. Already in the 8th century, a worrying pattern seems to be emerging:

And see what happens when one of their number tried to break this cycle of sightless sacking and banishment…? 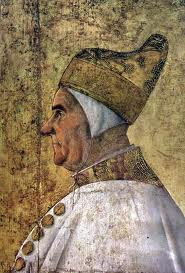 And then the pattern broke itself, though in a way that would have brought small comfort to the Doge in question.

- Pietro Gradonico (837–864) assassination, although in this case his successor arrested and executed the assassins

Given dogeal survival rates down the ages, losing some facial hair was pretty much as good a result as could be hoped for.

Okay, so so much for the Doges themselves – on to the “baume”….The word means “balm”, which in turn suggests to me some kind of solid perfume or pomade with which the Doge would have topped off his resplendent ceremonial attire. And meanwhile myrrh, which features in this scent, was traditionally used as an “embalming oil”, and there are suggestions that the Wise Man who gave it to the infant Jesus was alluding obliquely to the crucifixion the latter would go on to suffer. If so, that makes myrrh rather a dark choice on his part, but there it is. 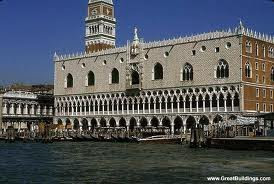 In selecting Baume du Doge and Icon, I seem to be drawn to an orangey-myrrh kind of a vibe, as both scents feature those notes. (Baume du Doge additionally has frankincense, so it could also have traded places with Eau Duelle.) However, Baume du Doge is very different in style from Icon: it is heavy, where Icon is bright and slightly astringent; it is also sweet and woody and spicy and jolly incensey. I am almost inclined to call it “gourmand incense”, if such a fragrance category exists. The first main olfactory element I can discern here is a bone dry woodiness that is the Duchaufour's hallmark (most memorably in Timbuktu), with connotations of tea chests and old furniture – it is an overtly “planky” style of woodiness. We are talking sharp shards of wood you could snag your pullover on if you are not careful.

This woody base is overlaid with the sweet, spicy creamy accord of the “baume”. The orange disappears quite quickly in the scent’s development, and the clovey, cinnamony spices take over. I picture a pot of pomade on dark wood dressing table in a room that barely sees the light of day. A dressing table stored in an attic would be even better, but I can’t see our Doge being quite spry enough to shimmy up the retractable step ladder to fetch down his musty unguent.

The overall effect of this scent is soothing and ecclesiastical. The same feel as Etro’s Messe de Minuit, but creamier and spicier – warmer and with less of the dank flagstoney thing going on. 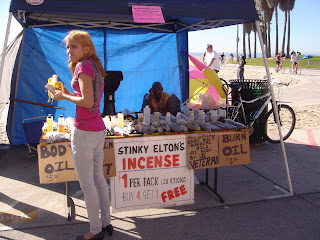 Now one of the ceremonial duties of the Doge was to celebrate the symbolic marriage of the city of Venice with the sea by throwing a ring from the State barge into the Adriatic. And it just so happens that I wrote this post in Venice, California, right on the beach, lushly fringed by palm trees and encampments of tramps and hippies.

Hippies…ah yes… that is the other element of which Baume du Doge vaguely reminds me. Head shops selling joss sticks abound in Venice Beach, and everyone here is pretty chilled, so possibly they are high on nag champa and baumed up on the nearest contemporary equivalent to our Doge’s pomade...which in modern hairdressing parlance would of course be called "product", but that is a whole other post...


Photo of Baume du Doge from Fragrantica, photo of a Doge from Wikimedia Commons, photo of the Doge's Palace from egypttoursonline.com and photo of an incense stall on Venice Beach my own.
Posted by Vanessa at 00:02

I loved your take on the Doge history. :)
I have a sample of this and I really like it bu then again, it's hard to find something by BD that I don't like.

I love being called BAP!

It brings to mind the British Association of Aesthetic Plastic Surgeons, otherwise known as BAAPS. Mine could probably do with their services, but hey-ho.

I never knew those Doges had such a rough time - there was clearly a lot more to the role than wearing a crooked pointy hat.

Soothing and ecclesiastical describes the effect of this scent so well. Now that they changed the style of the bottles somewhat, maybe I'll finally get this one. Yes, a very shallow consideration. :)

Baume du Doge is a Bertrand Duchaufour creation I've never tried, though now that will have to be amended. :) Terrific Doge history - I had no idea how fraught with peril the position was! I remember reading that Violet Trefusis gave Vita Sackville-West an onyx cameo ring depicting a doge as a symbol of her love; as plagued by conflict and controversy as their affair was, maybe should should have chosen something karmically "laden", so to speak....

You describe it perfectly! I have a bottle myself, and I always think of wooden spice chests and vintage silks when I wear it. Thanks for the great review. I didn't know anything about doges before. You'd think the job wouldn't be so popular if blinding was a common retirement present.

Not shallow at all - why, those bottles look like Aussie shampoo if you ask me!

Well, what an interesting titbit about Vita Sackville-West? "Karmically 'laden'" is just the word for it! Funnily enough, I have a perfume post in mind about Virginia Woolf, in which old Vita may also get a mention...

I love a good history lesson served up with perfume. I had no idea "Doge" was a position. I assumed it was a place in Italy..boy was I wrong!

I'm quite intrigued by the description "tea chests and old furniture". It brings to mind an old wooden dresser of my Grandmother's I inherited as a child. I was overwhelmed by how woody it smelled, possibly because I had never had real wood furniture before. I think everything in the 70s was made of plastic or plywood. Anyway, that was a long forgotten memory, thanks for reminding me of it!

I have to mention that according to Judith Martin/Miss Manners, the death of the wife of one Venetian doge was attributed to divine punishment for her insistence on dining with forks.

Very interesting review, adding _two_ more items to my bulging list of fragrances that I need to try. Orange with myrrh sounds like a smell that I need to experience.

These Doge misadventures were an eye opener to me too!

And glad I could help you reconnect with your grandmother's dresser. : - )

That whimsical story sounds entirely in keeping with the litany of woe the poor Doges endured!

Hmm, given what a Doge's life it was, why did anyone ever accept the position? (The up-side must've been pretty persuasive given the obvious down-side you've presented so succinctly.)

The "Baume du Doge" seems very appealing, so it'll have to go on the ever-lengthening list. (May turn out to be "the Doge's Rowlocks", to coin a euphemistically nautical phrase.)

Here's hoping you get lots of chocs. from Santa, to help you recover from being choc-deprived during your travels.

So I impulse bought some Lindor chocs in W H Smiths today - on offer at £1.99, so rude not to, really. Then Mr Bonkers bought a tin of Quality Street, ostensibly for his mother, and I bought his mother some Belgian chocolates in Marks to remind her of her trip to Bruges this time last year. So cocoa-wise, we should be solidly covered, thanks!

How creepy, that doge history! It's timely since I just finished viewing The Pillars of the Earth series.

I remember loving this perfume, but have not tested my sample for a bit. Will do so directly. Thanks for all of your great posts in the We Three Kings project! And Happy Christmas!

Good calls on the choc stock, and you were in Bruges in midwinter too??

Have you seen the film "In Bruges", with Colin Farrell and Brendan Gleeson? Shocking and bleak but with dark laugh-out-loud moments: definitely *not* one to watch with any sensitive people. (I'm in 2 minds about Ralph Fiennes's accent in it but it's still worth seeing.)

cheerio, and thanks for the hiring a la Suralan. I'll have to seek out the "Baum du Doge" in 2011.

This was a good choice (and a great post). This is often a fragrance that I forget about for no good reason. I like it.
I do understand what you mean about "gourmand incense". I always thought I felt that way being that my family cooked with myrrh and orris and other strange things.

Scary business being a Doge, no question!

I rather thought I had acquired this sample from you - it is the sort of scent you might have sent me, even if this is not in fact so. : - )

Thanks for your posts too (throughout the year, indeed), and Happy Christmas to you!

Yes, Mrs Bonkers Senior and I were in Bruges in snow in mid-December last year!

And I have seen that very excellent film, "In Bruges", thanks. It has lots of swearing and features pretty much every taboo and social minority from dwarves to paedophilia. Not one to watch with your Mother-in-law-equivalent, though she was understandably curious about it, given the setting. : - )

Glad you could relate to my term "gourmand incense" - in more ways than I reckoned on, indeed!

Stinky Elton: who is he? what is his backstory? Is he called "stinky" because of the incense he sells, or did he pursue a career in incense to cover up his existing pong?

Very valid questions - alas, we can but conjecture...