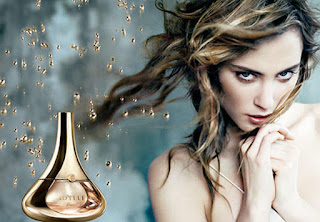 Yesterday I retried Guerlain's new release, Idylle, for the second time. Its modern take on a sweet, rosy musk accord instantly reminded me of Narciso Rodriguez for Her, just as the majority of reviewers had already observed. Yet when I first tried Idylle, my overriding impression was of a run-of-the-mill fruity floral, with no discernible musk. In the same sniffing session I also retried YSL's latest, Parisienne, and was pleased to find that the same image sprang to mind as the first time I smelt it, namely of "disgruntled purple talc". For there is a dark and restless quality to the powdery note - it is indignant almost - if that were not an absurd anthropomorphism.
But the Idylle is really nice, in this NR for Her / JHAG Lady Vengeance kind of way. So what is different this time? I don't think the theory of suggestibility is responsible here, prompting me to agree with the consensus on this fragrance about its common characteristics with NR for Her. For if that was going to work, would it not have done so first time round? So, assuming my nose was in good working order both times and not distracted by testing too many scents at once (it wasn't), I am going to stick my neck out here and say that the first spray must have been unrepresentative, namely that the nozzle did not deliver the musky element to my nose, but only a hefty dollop of sweet bright florals.
I have wondered about this before in cases where I have subsequently done a 180 on particular scents. I came to the conclusion that it must have been a different combination of notes I sprayed the second time, for how else could I have failed to spot the civet/pine needles/bizarre cumin-heliotrope accord/stonking tuberose/muddiness of non-specific origin (insert disagreeable note) there?
To avoid such irregularities, should I have shaken the bottle prior to spraying, squirty cream-style? Surely not! What about a slight tilt, to make sure there is no sediment at the bottom that is meant to permeate the whole mixture for a rounded fragrance? Equally silly, if we are talking a perfume that is relatively new, as opposed to some turn of the century vintage number with bottom feeders and all sorts in its murky depths.
Yes, an "unrepresentative squirt" is a preposterous notion - a scent has to be homogenous, with no surreptitious pooling of musk molecules half way down the bottle, like a huddle of school kids smoking behind the bike sheds. And yet this theory squares with my experience, so - having established the other day that I am a diehard solipsist - I intend to run with it for now!
Posted by Vanessa at 11:10

I think the power of suggestion has so much to do with it....or even peer pressure? How else could you explain a hate-love or love-hate relationship in such a short span of time? It has nothing to do with how our taste evolves over time since the said time span is short. I'm in the peer pressure camp on this one.

Peer pressure is definitely behind this phenomenon in some instances, but I genuinely think it should have worked the first time I smelt Idylle if that was the case, as my impression that the scent was well regarded in perfume circles was fully formed at that point. Plus I was dead excited to try it and very much wanting to fall for it. Yet I genuinely didn't get any musk then. 3xasif has put forward "temporary musk anosmia" as a possible explanation, which has got me thinking. And I do agree with you that my nose could not have improved its sensory powers in such a short time between sniffings!