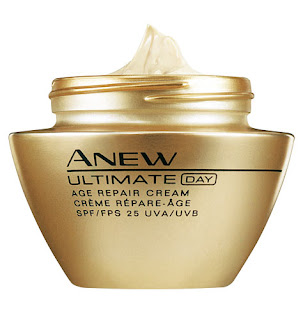 Today I am tentatively retrying an anti-aging day cream from Avon. It comes in a sleekly contoured brushed gold pot and its rather involved product name (helpfully also given in French) is etched on in a black, slightly space agey font not reproducible from the modest list of options available in my blog settings.

The product inside also sounds pretty futuristic and leading edge. For it is apparently "powered by pro-sirtuin TX technology". And although sirtuins might sound to you and me like dwellers of a distant galaxy, I learnt on the site http://www.thebeautybrains.com/ that they are in fact a family of proteins that "have been shown to reduce cell death by protecting cells against reactive oxygen species and DNA damage". I had to look up "reactive oxygen species" in Wikipedia to make sure this wasn't yet another alien race out of Star Trek - but they turned out to be none other than those pesky little mischief makers, free radicals. So far so good.
On further consulting a Cosmeceutical Peptide Glossary (no, really!), I noted that the particular sub-group of sirtuins we are talking about here are Heptapeptide-6. In an article in the journal "Nature", Dr. David Sinclair explained their role: "What we think is that if a cell is at a point of deciding whether to live or die, these sirtuins push toward the survival mode and let the cell try a little harder and longer to fix itself." said Sinclair. What valiant little enzymes! I am liking these sirtuins more and more. Never mind their role in anti-aging creams, The Samaritans should be trying to hire these guys....
But though the science does indeed sound wonderful, the experience of applying this sirtuin-rich technology on my face was not a happy one. I spread some over my top lip, which was immediately yanked upwards into a bee-stung sneer. And boy, did it sting! While the inevitable seepage made my tea taste horrid and undrinkable! But worse than the rictus I have now developed is the smell....which is the smell of burning flesh. I quickly googled "Avon Ultimate" and "burning flesh" and could find no one else with the same impression as me. However, I did find a review of a Prescriptives moisturiser (for the curious - Prescriptives' Good In Bed(!) Skin Restoring Night Moisturizer with sunless tanners) which likened its smell to "burning flesh and cat pee", and attributed the odour to the tanning chemical DHA. I can find no ingredients listing that would confirm the presence of DHA in my cream, so maybe these plucky little sirtuins simply don't smell too clever either. This is a blow, but according to the Avon website, if I can just grimace and bear it the Ulimate cream will "restore the look of natural volume and cushion" (sic) in just three days. So if no more posts appear by that time, assume I have either died of dehydration or seared my eyeballs.
Posted by Vanessa at 13:21

What you're discussing here is relevant because it is so in style now.....to be young and to stay young at any cost---applying cat pee to burn your flesh is one option, botox another, etc.

I'm afraid I don't believe in any creams that prevent aging, retard the aging process, or help your cells make decisions. I believe in eating a balanced diet filled with lots of fruits and vegetables, omega 3 through nuts, eggs and fish, drinking lots of water; avoid too much alcohol; avoid smoking and drugs (recreational ones, obviously); get enough sleep/rest; excercise regularly (yes, brisk walks count!). How's that for cellular regeneration! Oh, and genetics does play a role too.

My cells definitely have a mind of their own already, and have been taking a number of decisions lately with which I am not at all sure I agree.