Toxic Shock! - The 250 Chemicals in Perfume 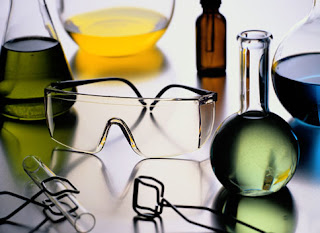 The day I left for Sweden the Daily Mail ran a feature about the extraordinarily high number of chemicals women routinely apply to their bodies in the form of beauty products and perfume - some 515 in total across all categories, of which 250 separate chemical ingredients in perfume alone. I have felt vaguely troubled by this ever since, even though I know you shouldn't believe everything you read in the papers.
There was a debate about the article on Nstperfume while I was away, in which Tania Sanchez intervened to defuse the scaremongering tone of the article, describing it as an "odd grab-bag of largely useless fright warnings". She took a number of the chemicals mentioned as being of particular concern, and countered the allegations against some of them by saying that the link with cancer etc was not proven, or that the chemicals would only be harmful at much higher doses. In the case of other chemicals, she considered them to be generally harmless, always allowing for the odd person with allergies or sensitive skin who might find them bothersome.
Tania pointed out that some of these chemicals routinely found in lipsticks, body lotion, deodorants etc are also used in other everyday items such as eye drops, acrylic paint and PET bottles. She found this wider usage reassuring, while another poster begged to differ:
"Just because something is in.....acrylic paint, or commonly used in moisturisers and lipsticks, or in our plastic bottles, doesn't necessarily mean it's healthy for us to use everyday, all day on our skin, for pretty much our entire lives."
That is really the nub of it - as with pesticide residues or radiation levels from mobile phones - no one seems to be sure about the cumulative effects of these potentially harmful things. Women (and men!) are using more and more grooming products than ever before, which in turn have segmented and diversified to a mind boggling degree. I am still unsure as to the difference between body scrubs and butters, oils and lotions, "washes" and milk... My partner's mother (aged 74) has never used moisturiser but occasionally smears Vaseline on her eyelids if they are feeling dry.
My own mother (for whom Pond's Cold Cream was the cornerstone of her beauty regime!) also used to say, however, that "you eat a peck of dirt before you die". Or in this case - you aborb a tonne of chemicals transdermally... Yes, there is more to life than trying to live as long as possible. I don't smoke, but I drink - always the recommended weekly allowance for a woman, and sometimes a few units more! And it appears that for women over the age of 50, health risks associated with alcohol consumption rise sharply. Or I think that is what I read somewhere. So I should probably cut my drinking back by about two thirds if I am really serious about my health.
So in summary I may be a walking chemistry set, but when it comes to the old liver and kidneys, the benzaldehyde in my favourite perfumes may be the least of my worries... : - )
Posted by Vanessa at 16:20

Good summary. We can't run around being scared about the latest bits of science news to come our way, particularly when those bits are speculative or lack true scientific clinical trials/proof. Remember when the entire world (including the scientific one), adamantly believed that the earth was flat?

I think moderation is the key. Enjoy yourself in moderation. Be accepting and prepared for consequences and look forward: to fun, then the grave ;-)