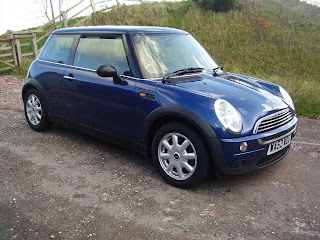 After six months of unemployment, I have just gone back to work. Yay! Urgh! Eek!

And Bonkersaboutperfume will be taking another break from tomorrow, as I am going away on a work trip until the Easter weekend. I have meetings in Belgium, France, Germany and Switzerland, and am driving over in my own car, Maurice the Mini. As it turned out, transport arrangements were somewhat up in the air until late on Friday... Maurice went in to a garage on Wednesday for his annual MOT inspection, and didn't emerge. First there was talk of a leaky radiator, which took a while to replace. Then on Friday there were dark mutterings about a faulty temperature gauge.

The garage inquired whether the gauge had been like that when I took the car in - "that's if you'd notice" - they said, in a thinly-veiled-contempt-for-lady-drivers-kind-of-way. Well, I was able to reassure them that, being a completely un-hands on vehicle owner, I look at all the dials more than an averagely responsible motorist would, because that is my only way of telling if the car is about to blow up because I haven't put oil or water in it since 2007, type of thing. Anyway, Maurice was delivered back to me at 4pm, just in time for the big adventure. 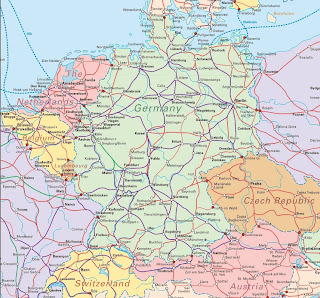 If I get the chance to post while I am away, I will. Mr Bonkers has even threatened to put up a post in my absence if he is feeling inspired... (for "inspired", read mischievous!) We'll see. The trip also means that I will probably not be able to keep up with other people's blogs as much as I would like, which I am sorry about. I have a really old and rubbish lap top, you see, and rely for the most part on Internet cafes to pick up emails, many of which are coin operated. Some (the ones in casino chains like Spielothek) are also in complete darkness, which can be a little disorientating at 11am.
Posted by Vanessa at 11:04

Happy trails and have a wonderful time!

have a wonderful safe trip!

Congrats on your new job and happy driving in your Mini !!!

Hope the trip is successful, and that you get the opportunity to do a few fun things on your own. I look forward to your next post!

Have fun! I hope that even if you can't blog, you have opportunities to sniff.

Congratulations on your new job! I hope you're having a successful trip and are finding time to do some sniffing too!