Back From The Bonkers Road Trip! - Part One 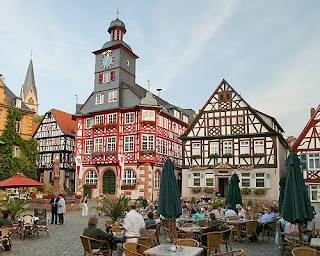 Well, I am back from my four country trip, and pretty bonkers it was too: 2840 miles (4545 km approx for metrically minded readers) in 19 days, and I have a very sore lower back to prove it, offset by a not inconsiderable sense of achievement. It was good to be working again, and everything felt very familiar: the aggressive tailgaters on the Autobahn, the old boys supping beer at cafes at 9.30 am, the women of a certain age with spiky hair dyed a startling shade of scarlet, and the thunderously stern corporate types sporting incongruous comedy ties.

Then on the food front there were the breakfast eggs that are always either hardboiled and warm or softboiled and cold, and the cups of tea served with hot milk, condensed milk, or no milk at all. Not forgetting the dark and worthy breads, the fruit salad that is mostly apple by the time I get to it and ever so slightly fizzy, the holey cheese and the glistening curls of smoked ham. Sleep often eludes me in these parts, for the duvets are invariably too thick and the pillows too thin. You have to fold them in two - or better still, nick the one from the other bed, having first consumed the small packet of Gummibears or the single square of Lindt chocolate that adorns it. 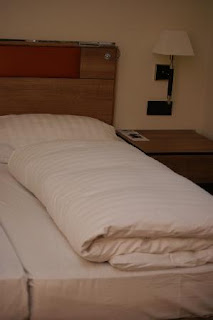 Then, after twenty years of doing such trips, there is always something new to catch you out: this time it was the revolving door that moved in the opposite direction to that indicated by the arrows painted on the floor. "It's an initiative test for all our visitors!" explained my respondent brightly. "Some of them have been wandering about the building for years." I was also royally foxed by a petrol pump with a touch screen display that failed to obey the frenetic stabs of my forefinger, and on another occasion I spent an anxious quarter of an hour trapped by my GPS in a perpetual loop around Ludwigshafen railway station, 11km away from where I needed to be. 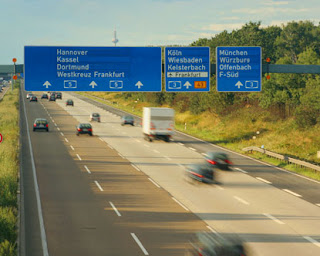 Other oddities included a man performing cartwheels and back flips in the middle of a busy road in Brussels - fortunately when the traffic lights were on red - and the hotel in Switzerland which I shared with the Serbian U-17 football team and its entourage of reserves, trainers and minders. Fortunately only two of their party had remembered to bring swimsuits, such that I didn't have to share the hotel pool with more than one of them at once - their butterfly stroke was very splashy.

The sat nav was in my bad books this time not just for its moments of intermittent madness, but also for "English Kate's" disgracefully sloppy pronunciation. She pronounced "Cologne" as "Callen", to rhyme with "Fallen", and once I went down the motorway in the opposite direction, thinking she had said "Solingen". Heidelberg came out as "Arschenbeck", and "Geneva" as "Shenf", but by then I had got the measure of her mangling.

Over the course of the three weeks I crisscrossed Switzerland so many times I developed "tunnel vision", and every time I passed through Bern, I couldn't help but smile at the sign for the "Wankdorf City" retail park...

The worst thing about the driving was the potholes - oh my goodness - the EU should set up a disaster fund to sort out the roads as a matter of urgency. If I had a quid for every sign saying "Chaussée déformée" or "Route dégradée" I could have afforded a light lunch. 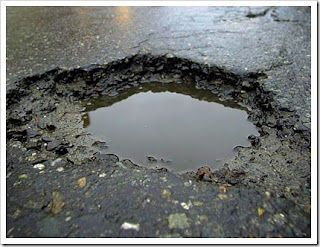 Oh yes, that is the last thing to mention - the incredibly strong euro and Swiss franc, making my money go not very far at all. To give you an idea, a picture postcard cost £1.50 in Zurich, as did their public toilets. So obviously I all but gave up fluids while I was over there.

Mr Bonkers kept the home fires burning in my absence, and did a surprising amount of his own laundry. He liked the fact that the house smelt only of last night's chip papers and Indian take aways. He was able to rinse out his empty beer bottles in the kitchen sink, unimpeded by the presence of half a dozen metal funnels soaking in soapy water. And when he went into the bedroom, it was refreshing for him not to crunch plastic bags of sample vials underfoot.

As well as the work, there was a strong perfume angle to the trip: I met assorted nationalities of perfumistas from Basenotes - two of them twice! - and had a full day's solo sniffing in Zurich's finest perfume emporia. The perfume related aspects of my travels will be fully documented in Parts Two and Three...though not quite as fully as I would have liked, as my camera bit the dust on the first day.
Posted by Vanessa at 18:47

So glad you're back! Looking forward to hearing about your travelling adventures, and about the people from Basenotes.

Hey thanks, and the same to you! Scent adventures to follow shortly...

You're back! :)
Can't wait to read about your sniffing experience. And the trip sounds full of interesting experience (interesting incorporating both good and somewhat bad but unexpected). :)

Hi Ines
Glad you had a good skiing holiday and that Bal d'Afrique cut the mustard - as in the cold, I mean!

The trip was great, thanks, and always interesting, as you say, even the odd stuff that gets thrown at you. : - )

Hurray you're back!!! *I'm still smiling re: Wankdorf too* Looking forward to reading Parts 2 and 3. Glad you had a safe trip and the potholes didn't swallow you alive.

Hello there, BF! As well as Wankdorf, I also passed the office of a "Mister Kunterbunt", who is a children's party organiser...

On past trips I have chuckled at the Cafe Bonk in Hanover, while Leverkusen boasts a Hotel Fück and Krefeld a street called Langendonk.

Glad you're back, glad you had an enjoyable, if slightly frustrating, time.

Isn't it great? I briefly dated an Italian plastics engineer who lived at No 30-something.

Looking forward to parts 2 and 3, I have missed your lovely blog!

Aw, thanks, Hebe! Hope to post Part 2 tonight or tomorrow.

All you should ever do is write, Ms. Bonkers-- "The fruit salad that is mostly apple by the time I get to it and ever so slightly fizzy"; "The EU should set up a disaster fund to sort out the roads as a matter of urgency"; and, as ever, home life with the Bonkers is ever laugh-worthy--you are just the best!!

Wait-- I take that back-- all you should ever do is write-- and do the things that inspire you to write. Just don't stay away so long next time!

I reckon two weeks is probably the optimum time in which to have some adventures and gather material without suffering from cabin fever - or "cockpit fever" - as the state of being stuck behind the wheel may be termed.

LCN noted the fizzy apples already...from then on, you totally had me. Thanks so much for such an entertaining account.